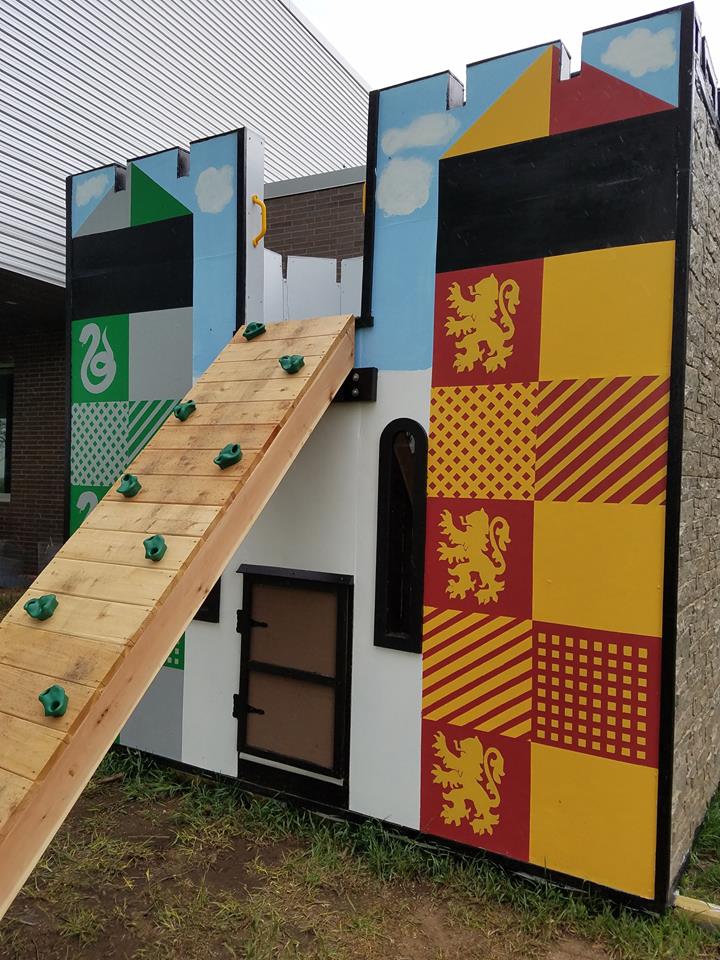 Lawrence High School students in Charlie Lauts' capstone design/build course spent the spring semester designing and building this Harry Potter-inspired playhouse, complete with quidditch towers, for Douglas County Court Appointed Special Advocates, or CASA. The playhouse will make appearances around the Lawrence area this summer before being raffled off Sept. 29 at a CASA fundraiser.

Those driving past or visiting the Hillcrest Shopping Center near the intersection of Ninth and Iowa streets may have noticed an unusual addition to the strip mall’s parking lot lately. In recent days, a miniature Hogwarts-style castle — complete with Quidditch towers, a second-story library and a fireplace that doubles as a door — has found a temporary home outside The Merc.

It’s the first tour stop of many this summer for the Harry Potter-inspired playhouse, designed and built especially for Douglas County Court Appointed Special Advocates, or CASA, by Lawrence High School students.

The officially named “Hogwarts House Commons” will make appearances throughout the Lawrence area before being raffled off in September as part of an annual fundraiser for CASA, said Diana Frederick, CASA’s executive director.

“They just did a magnificent job,” Frederick said of this year’s playhouse. As a longtime fan of J.K. Rowling’s book series, Frederick said she’d wanted to see a Potter-themed playhouse for a long time before assigning the project to Charlie Lauts’ capstone build/design class at Lawrence High. The results, Frederick said, are simply magical.

“We were envisioning something that would bring the Harry Potter magic to life for the children in our community,” Frederick said. “The kids served by CASA, of course, are kids who are in foster care and have suffered abuse and neglect, but if you’ve read the Harry Potter stories, you’d know that Harry himself is a bit of a foster child. So, there’s a lot that resonates there.”

Lauts, who has supervised playhouse projects since the school district partnered with CASA three years ago, said this year’s creation has been the most ambitious yet. As soon as the spring semester began in January, her students got to work designing the playhouse, later presenting their ideas to the CASA board of directors. After seeing their “Hogwarts House Commons” design approved by the board, the students spent just about every class period, right up until the last day of classes before summer break, Lauts said, to finish the project in time for its unveiling late last month at the Lawrence Busker Festival.

They even worked a couple Saturdays, too. Building the playhouse took place outdoors at the Lawrence College and Career Center, with Lauts and her students working through warm late-spring days and chilly winter temperatures.

“I live several miles south of town, but if there’s any way I can drive by The Merc just to look at it, I’ll find a way to do it,” Lauts said of this year’s creation.

Lauts’ class serves as a design and building capstone course, she said, and many of her students have already taken cabinetry, drafting, welding and other classes before working on the CASA playhouse. But for even her most experienced students, the process of designing and building an actual structure larger than a scale model, Lauts said, is completely new.

“They truly have this sense of ownership to it,” Lauts said of the personal investment her students have made in the playhouse. “It’s a part of them. It will always be a part of them.” 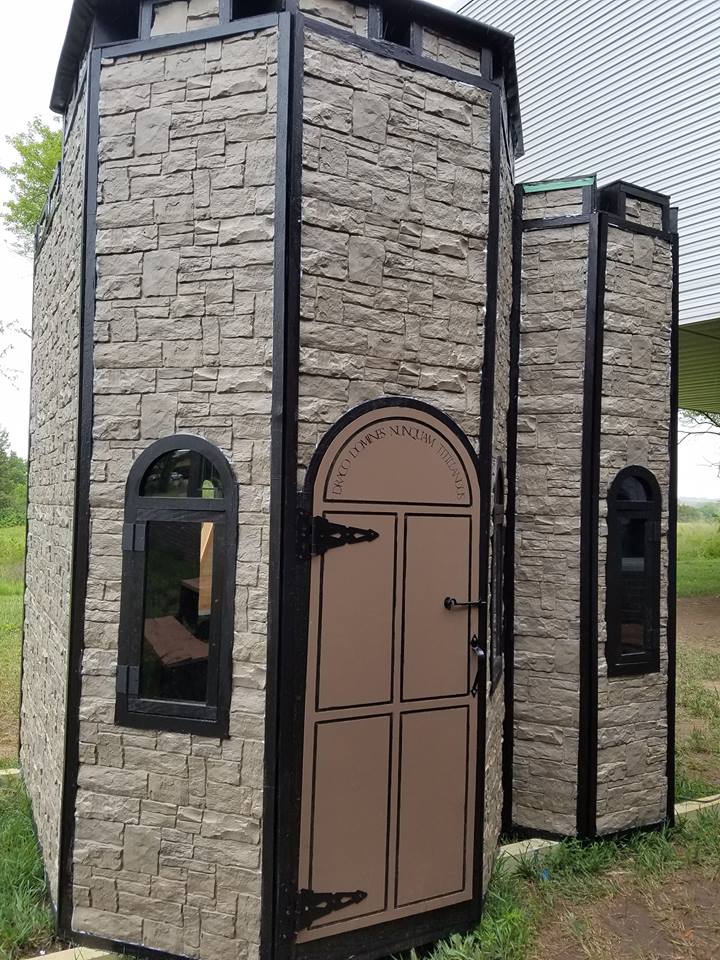 Lawrence High School students in Charlie Lauts' capstone design/build course spent the spring semester designing and building this Harry Potter-inspired playhouse for Douglas County Court Appointed Special Advocates, or CASA. The playhouse will make appearances around the Lawrence area this summer before being raffled off Sept. 29 at a CASA fundraiser.

Noah Mercer, a senior at the time, was among a handful of students to see his group’s winning design approved by the CASA board. Mercer, who enjoyed the Harry Potter books and movies as a kid, said he wanted the playhouse to provide an immersive experience for the folks who end up with it.

So, unlike previous playhouses, the “Hogwarts House Commons” comes with a few magical extras, including a chess table and chairs, chests for storing robes and Quidditch balls, 10 handmade wands and a bookshelf.

The last semester has given him valuable “real-world experience” in designing and building, said the 19-year-old, who plans to attend the University of Kansas in the fall. He’s already been accepted into the KU School of Architecture, Design and Planning’s accelerated, five-year master’s degree program.

Mercer said he hopes his “Hogwarts House Commons” ends up with a family “who needs a place for all their children, or a neighborhood of children, to play in.” He also hopes the playhouse will help nurture a greater connection to the magical world depicted inside its walls.

The bookshelf Mercer and his classmates built, he adds, could be the perfect spot for young readers to display their “Harry Potter” books.

“If they can get something else out of the experience of having the playhouse other than just playing in it,” he said, “that would be wonderful.”

McCownGordon Construction provided materials and other funds, totaling about $5,000, for the project, Diana Frederick said. The “Hogwarts House Commons” will remain parked in front of The Merc through June. Frederick also suggested checking CASA’s website and Facebook for updates about the playhouse’s touring schedule. (There might be a Harry Potter-themed event in the works, Frederick said, possibly with butterbeer floats for the kids.)

The playhouse will be raffled off during a drawing at the “CASAblanca” fundraiser Sept. 29 at Abe and Jake’s Landing, 8 E. Sixth St. Raffle tickets can be purchased with a $5 donation through CASA’s website or at the customer service department of The Merc, 901 Iowa St.