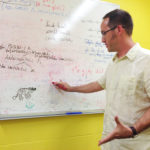 At the time of his death in 1999, Parker McKenzie was regarded as the oldest living member of the Kiowa tribe. Born in a teepee in Oklahoma three years prior to the 20th century, he was also widely recognized as an amateur linguist who played a fundamental role in developing a dictionary of his native Kiowa language nearly 100 years ago.

“He was just known for being the guy that you would go to,” Andrew McKenzie recalls of his great-grandfather, whose many projects included the documentation of Kiowa history, cultural artifacts and language.

The elder McKenzie’s method for writing Kiowa using English characters is still used, in a modified version, by researchers today. And Andrew McKenzie, who grew up knowing bits and pieces of the language, is one of them.

McKenzie, an assistant professor of linguistics at the University of Kansas, recently secured a grant from the federal government that will allow him to continue his great-grandfather’s work in preserving the Kiowa language — a pressing need, McKenzie says, as the number of fluent Kiowa speakers dwindles by the year.

“Languages only exist in our minds, so once those speakers leave us, they take the knowledge with them, essentially, unless that knowledge is preserved through documentation,” says McKenzie, who began formally studying Kiowa about 20 years ago. “In that sense, the documentation becomes essential because it would allow the language to survive into the future.”

The more complete that documentation is, McKenzie adds, the better chances are for the language’s survival as native speakers pass away. Kiowa, like many North American languages, is “extremely endangered,” says McKenzie, who estimates there are about 60 fluent speakers left. They’re mostly elderly and concentrated in McKenzie’s home state of Oklahoma, where he often travels to conduct interviews with remaining Kiowa speakers. And they likely won’t be around much longer, he says.

“I think the youngest person I’ve worked with was in their 80s,” McKenzie says.

Earlier this month, McKenzie learned he’d won a three-year grant from the Documenting Endangered Languages program of the National Science Foundation. The $112,000 award will allow him to “fill a gap” in the study of Kiowa grammar, work his great-grandfather started as a kid passing notes in his native tongue — speaking Kiowa was strictly forbidden at the boarding school he and other Native Americans were forced to attend — during class to his girlfriend, funnily enough.

That early system devised by Parker McKenzie became the basis for methods still used today, though there’s no consensus on the matter, McKenzie says. The Kiowa tribe has never voted to designate an official writing system.

These days, McKenzie is using his great-grandfather’s system to document and expand our understanding of Kiowa’s semantic grammar. Or, as McKenzie describes it, “the meaning of the language, and how that meaning interacts with the structure.”

Linguistically, Kiowa’s closest relatives are the handful of languages spoken by Pueblo peoples in New Mexico, McKenzie says. It’s far removed from more well-known North American dialects such as Cherokee and Navajo, he says, and completely unrelated to European languages. Kiowa is unique, among other traits, for its ejective sounds and tone system, in which “the pitch of the sound can be as distinctive as two distinct sounds,” McKenzie explains.

Throughout the duration of the grant, McKenzie will work on a book, associated scholarly articles and teaching materials such as booklets, games and flashcards.

“Growing up I remember he would frequently lament that his progeny were not learning the language,” McKenzie says of his great-grandfather. “In that sense, I think he’d be excited.”

“I think if he were still around, he’d be the first to help me out,” McKenzie said.