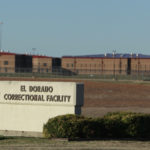 WICHITA — Inmates at a Kansas prison housing some of the state’s most dangerous criminals twice took control of the prison yard for hours in recent months, setting a fire, trying to create barricades and breaking into a security office, in mass disturbances not previously disclosed by corrections officials, according to prison guards who spoke to The Associated Press.

Two corrections officers and a third person who could see the emergency logs as the disturbances unfolded spoke to AP on condition of anonymity because they fear reprisals from their employer. They said low staffing, work shifts of up to 16 hours, and prison overcrowding have created dangerous conditions for guards at the El Dorado Correctional Facility.

The two previously undisclosed uprisings were during the week of May 8 and on June 24 — the second incident just days before a third disturbance on June 29 became public because inmates accessed a working cellphone while it unfolded and called relatives, the officers said. The Kansas Department of Corrections has downplayed the third disturbance as nonviolent with minimal damage.

But a corrections officer who was at the facility on June 29 told AP that inmates tore out security cameras, smashed windows, broke lockers and monitors for cameras. They also stole personal items belonging to guards. The disturbance involved between 60 and 80 offenders, and included two separate fights among inmates.

In response to an open records request from AP, the department said Tuesday that 11 discipline reports on inmates were written with alleged violations on June 29.

“The incident that happened on June 29 was actually started a couple months prior to that,” said Robert Choromanski, executive director of the Kansas Organization of State Employees, the union that represents prison employees, “There’ve been disturbances that have not been reported to the media before that date because the administration was very good at keeping everything hush-hush,” he said.

Kansas law requires an investigation and report to the Legislature on any inmate death and annual reports to lawmakers on serious crimes committed by offenders in the department’s custody.

In May, inmates took control of the prison yard for about six hours in an uprising after jail officials unsuccessfully tried to lock down the prison following an assault during which an inmate “sucker punched” a guard, the officers said. The inmates dragged weightlifting equipment to barricade the gate into the yard, but caused no significant damage.

On June 24, inmates again took control of the prison yard for hours and lit a plastic trash can on fire, the guards said. Inmates also broke into a security office where they took ballistic vests and empty mace cans.

That June 24 disturbance led prison administrators to make changes in the daily schedule, including not allowing inmates to take showers after their recreation time — the catalyst that set off the subsequent June 29 uprising, the officers said.

The two officers, one now employed at the prison and the other who has since left, said conditions have been deteriorating since Kansas officials began earlier this year transferring maximum-security inmates previously housed in segregation at the state’s oldest prison in Lansing to El Dorado, where guards have neither the training nor adequate facilities to handle them.

“The inmates are getting very restless and taking advantage of short staffing,” Choromanski said.

Corrections department spokesman Todd Fertig said in a short statement that the department has “balanced” its population of maximum-security inmates among its three largest prisons in Lansing in the Kansas City area, Hutchinson, northwest of Wichita, and El Dorado, 30 miles east of Wichita.

Even before then, El Dorado housed inmates sentenced to die for multiple murders. The prison opened in 1991 and can house 1,511 inmates without double-bunking some cells. The prison housed 1,897 during the June 29 disturbance, or 25 percent above capacity. The number of inmates declined to 1,759 inmates by Friday.

Corrections Secretary Joe Norwood said in an emailed statement that the department has “the utmost concern for the health and wellbeing of both staff and offenders at all its facilities.”

But the guards told AP that the situation is so dangerous at El Dorado there has been an exodus of experienced staff quitting or taking early retirement. One-in-five of the 360 uniformed officer positions at El Dorado are vacant, the corrections department said.

To alleviate staff shortages at El Dorado, the department recently emptied a cell house and relocated those inmates to other prisons, Fertig said, freeing up 14 staff.

Fertig also said the department will have a couple of new classes of prison guards soon.

The department advertises corrections officer jobs as starting at $13.95 an hour, with 18-year-olds welcome to apply. The state workers’ union filed a grievance in mid-July saying that some El Dorado officers were being required to work 16-hour shifts — after the prison moved from 8-hour to 12-hour shifts.

The average number of cases per month also has risen at three other Kansas prisons, but by nowhere near as much as El Dorado. And the average has fallen at five other prisons.

Rep. Russ Jennings, the Republican chairman of the state House Corrections and Juvenile Justice Committee, said that if the corrections department wants the Legislature to help deal with the mounting problems at prisons, “you’re going to have to be pretty open and honest about what’s going on.”

“It raises an eyebrow as to how open are you really being with what’s going on,” said Jennings, who led the Juvenile Justice Authority for four years.