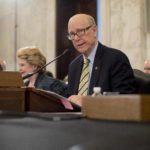 TOPEKA ? Kansas Sen. Pat Roberts is working with fellow Republicans on their legislation to overhaul health care and arguing that a debate should occur quickly even as fellow Kansas Sen. Jerry Moran grabs national headlines for helping stall the effort.

Roberts acknowledged during an Associated Press interview that he’s not happy with parts of the latest version of the bill meant to replace former President Barack Obama’s signature 2010 Affordable Care Act. His staff said he’s been working with the plan’s drafters on provisions protecting financially stressed hospitals and a home health program for rural states.

But Roberts is stressing a broader message about health care: “We have to move.” He argued that whatever flaws fellow Republicans see, delaying a debate is likely to allow conditions in the health insurance market to worsen.

“The whole point is to get where we want to get, we have to get on the bill,” Roberts said. “We can’t just sit back and complain about it.”

Moran jumped into the spotlight when he and Utah Sen. Mike Lee tweeted early in the week that they couldn’t support the latest version of the Senate GOP plan, denying it the votes it needed to pass. Majority Leader Mitch McConnell canceled plans to move forward, though GOP senators now expect a debate in the coming week after public pressure from President Donald Trump.

Moran called on Congress to “start fresh” and criticized the “closed-door process” behind the GOP plan. He endorsed an failed plan to repeal the Affordable Care Act without having a replacement ready.

Roberts would not directly criticize Moran but he said Congress did start fresh on health care and the Senate GOP’s plan is “what we ended up with.” As for having a Senate committee start over, he said, “My God, that would take months.”

“You can create headlines,” Roberts said. “I’m not interested in the headlines.”

Instead, he said, it could reflect how they’re in different stages of their political careers, with Moran having more time to build a political legacy. Roberts, 81, is serving his fourth term in the Senate and his career in Congress or as a congressional aide stretches back 50 years. Moran, 63, is in his second Senate term, having first won a safe U.S. House seat in 1996.

Beatty said Roberts also appears to have a more “black and white” view of working with Democrats. Roberts suggested during his interview that minority Democrats won’t help pass health legislation at all because they want to move toward government-run coverage similar to Medicare for the elderly.

But Roberts said he sees a need for Congress to move quickly on overhauling health care because he doubts “Obamacare” is sustainable even in the short-term, with health care costs and premiums continuing to rise.

Roberts said delaying action will encourage insurers to leave the health care markets set up under the 2010 law to help individuals find coverage.