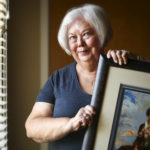 Amelia Earhart had been missing nearly 10 years before Jeannine Wyatt was even born. Still, separated by time and space, Wyatt always felt a connection with her hometown heroine, a fellow tomboy who played along the same bluff high above the Missouri River some 50 years before.

Across generations, two girls sat not far from each other, dreaming their dreams. That’s how Wyatt, now 70, reminisces about her childhood in Atchison, where stories of the famous aviator, born there in 1897, loomed large.

Wyatt recently fulfilled a longtime dream in writing and publishing “Amelia: The Town and the People Who Loved Her.” The coffee-table book, which came out last month, tells the story of Atchison and its most famous daughter, peppered throughout with photographs, old maps and anecdotes from Wyatt and other locals.

The first-time author will discuss Earhart and her book Saturday morning at Benedictine College as part of this weekend’s 21st annual Amelia Earhart Festival in Atchison. “Amelia” is available at the Amelia Earhart Birthplace Museum gift shop, Wyatt says, and will soon be offered through Amazon.

What: “Breakfast With the Books”

Where: the lobby area of O’Malley McAllister Auditorium on the campus of Benedictine College, 1020 N. Second St. in Atchison

Wyatt, a retired human resources professional, maintains close ties to her hometown. It was at the Amelia Earhart Birthplace Museum, where Wyatt serves on the board of trustees, that she finally put her author aspirations into action just about a year ago. “Amelia,” she says, draws heavily from her own family history, as well as archive materials from the museum. As a kid, she’d sit along the river bluff and gaze toward the big white house, thinking about Earhart, she says.

“Having grown up there, I know so many of the stories, because kids that I played with and grew up with and went to school with — their grandmothers and their great-aunts played with her,” Wyatt says.

Earhart spent her childhood in her maternal grandparents’ Atchison home, living there and visiting her parents in Kansas City until her family’s move to Des Moines when Earhart was 12. Her mother, Amy, encouraged a sense of adventure in Amelia and Amelia’s younger sister, Grace Muriel, though the girls’ grandmother didn’t exactly approve of Amelia’s boyish scrapes, Wyatt writes in her book.

One of little Amelia’s favorite activities, Wyatt says, was shooting varmints in the family barn with her grandfather’s longtime handyman, “much to the chagrin of Grandmother,” Wyatt says. The hobby “ranked right there” with other unladylike pursuits favored by Amelia, such as hopping the fence and exploring caves along the river bluff.

Even after her family’s moves to Iowa and other Midwestern enclaves, Earhart continued to visit old Atchison. In the summer of 1935, Earhart, who by that point was already a famous aviator, made one last visit to her hometown. The trip was marked by celebrations and a parade in her honor, and one young Atchison resident in particular was thrilled by her arrival.

Wyatt’s father, then just 12 years old, followed Earhart around town all day. Russell E. Kiehl “stayed within arms-length of Amelia,” Wyatt writes, “and Amelia just smiled at him.” Earhart was a boyhood heroine of the late Kiehl, who enlisted in the Air Force during World War II with dreams of becoming a pilot just like her.

Because he wore glasses, the Air Force turned him down for piloting and navigating spots. But Kiehl was happy in the end because the Air Force did eventually accept him as an airplane mechanic.

“That was just fine because Amelia Earhart was her own plane mechanic,” writes Wyatt, who uses the pen name J.A. Kiehl, in “Amelia.”

The unsolved mystery of Earhart’s disappearance continues to fascinate 80 years after she embarked on her around-the-world flight in 1937.

Wyatt, agreeing with many Earhart enthusiasts, believes the aviator was captured after crashing her plane on the island of Saipan during her historic flight. Wyatt’s father, she says, also spent time on Saipan during World War II.

“For years I thought about that,” Wyatt says of the possible connection between her dad and his idol.

Others believe that Earhart simply ran out of gas, crashed and died in the Pacific Ocean northwest of tiny Howland Island.

Recently, a photograph that, some argued, showed her and navigator Fred Noonan in the Marshall Islands in 1937 after their plane crashed in the Pacific became the basis of a much-watched History Channel documentary, “Amelia Earhart: The Lost Evidence.” The theory of the documentary was that the two survived the crash, were taken prisoner by the Japanese and died in captivity.

Within the last week, though, news surfaced that the photo at the heart of the documentary was evidently taken in 1935, a full two years before her famed 1937 flight — keeping the Earhart mystery alive and well.

Earhart, like Wyatt’s father, taught Wyatt the importance of setting goals, she says. Earhart wasn’t deterred by experiments gone wrong. Instead, Wyatt says, “if it didn’t work, you went back and found another way to make it work.”

A few years back, around the same time her father died, Wyatt decided to create a 25-item “bucket list,” which she has since maintained by adding goals as she crosses others off. A book about Earhart, she says, was on that list for a long time.

The exercise keeps life “fun and interesting,” Wyatt says. “I think that’s what Amelia would have done.”

“It was like I’d been carrying her spirit around in me for a long time,” Wyatt says of finally putting to paper her “love letter” to Earhart.

The Amelia Earhart Festival kicks off at 7 p.m. Friday with a country-western concert — featuring Big & Rich, Cam and Erik Dylan — at Atchison’s Warnock Lake, 17862 274th Road. Other highlights include Saturday’s fun run, historic airplane display, various children’s activities, Amelia Earhart Birthplace Museum tours and a 120th birthday celebration (complete with cake and a card for visitors to sign) for Earhart from 11 a.m. to noon along the 500 block of Commercial Street in Atchison. The festival ends Saturday with the “Concert in the Sky” fireworks show along the banks of the Missouri River.

For more information on the festival, including a complete schedule, check out visitatchison.com.