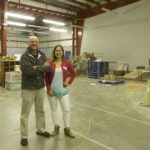 Lawrence Community Shelter Executive Director Trey Meyer and Director of Development Mia Gonzalez stand in the facility's warehouse, which they hope will provide some space for the homeless looking for an overnight respite from the streets during cold weather. The Douglas County Commission is considering a request for 4,000 for renovations on the overnight dorm.

Trey Meyer and the staff of the Lawrence Community Shelter understand life-and-death decisions can happen at the shelter’s door.

“It’s happened here before,” said Meyer, executive director of the shelter. “Four or five years ago, we turned a person away, and that person died. That scenario is never far from our mind. When we have 140 people in the building and we have someone show up at our doorstep when it’s 5 degrees outside, that’s a terrible conversation to have. It’s a choice of letting a person in and going over our occupancy limit or turning someone away, which is also not a good choice.”

The shelter has developed a plan meant to reduce the chances anyone would be turned away to struggle for survival during a long, frigid winter night. Currently, the shelter’s special-use permit with the city of Lawrence allows it to expand its occupancy from 125 to 140 people when the temperature falls below 45 degrees, Meyer said. It is looking to take in 15 to 25 more people during the six cold-weather months from October to March.

To realize that plan, Meyer has asked the Douglas County Commission to provide $54,000 in its 2018 budget to remodel an area within the unimproved warehouse that makes up about one-third of the shelter’s 28,000 square feet. Meyer said the funding would also hire a new overnight staff member for those cold-weather months.

The request is the latest sign of how the number of people served at the shelter continues to grow. When the shelter was still located downtown in 2012, it had a maximum capacity of 75 people. On cold nights, the shelter ran an auxiliary program where another 15 people could sleep in downtown churches.

The shelter’s mission and the work that goes on there explains the need for the expansion. Meyer said the shelter, which has been at its 3655 E. 25th St. location since 2012, is not a people warehouse, nor does it function as a revolving door to those wanting a temporary respite from the streets.

“The spectrum of people we serve runs to transients on the one end to those who are precariously housed on the other end,” he said. “We view our mission of helping folks all across that entire spectrum. In a world of limited resources, we try to make good decisions on how we use those limited resources to help the most people we possibly can. We are a place people can come when they are having a hard time to get their feet back under them and try to help them work back to living independently. That’s where we spend the majority of our time and energy, working with those folks who want to change their path.”

Those are the “guests” who populate the shelter for up to three to four months. Meyer said the shelter works with the Bert Nash Community Mental Health Center, DCCCA, the Lawrence-Douglas County Housing Authority and other community partners to help those residents succeed.

The shelter is successful in that work, said Mia Gonzalez, the shelter’s director of development. In 2016, 137 of its guests left the shelter employed and 153 found permanent housing, she said.

But if that’s the focus, there is also an awareness there is another homeless population not interested in programming.

“There is a certain segment of folks who cannot or will not meaningfully engage in that programming,” Meyer said. “They cannot because of their mental illness, or they are wrestling with some substance abuse disorder, or both, and they are not personally capable of engaging in those guidelines. For other folks, it’s a lifestyle choice. They choose not to come here, because they don’t want to be service-engaged.”

Nonetheless, as the providers of the only emergency shelter in Douglas County, Meyer said he and his staff do want to better serve those who have no current interest in programming.

“It would be very basic,” he said. “A person would be permitted to come in for the evening. They would have to leave the following morning. While they are here, we would provide a roof over their head, a mat to sleep on, a peanut butter sandwich, some coffee and water — just the basics. Our experience is there is a segment of folks that those basics are all they are willing to receive right now.”

The warehouse space to be converted for overnight sleepovers is isolated from the shelter’s regular dorm, which addresses security concerns and would give staff more flexibility about who is allowed in the building, Meyer said. The shelter would continue to enforce its policy of prohibiting registered sex offenders, he said.

It is the staff members’ hope they will find some of those seeking temporary shelter ready to rethink their lifestyles, Meyer said.

“One of our hopes with the auxiliary shelter is as folks get connected with us and learn a little bit about us, the lightbulb starts to come on and that person can come to one of our case managers and say, ‘I’m really ready to try and do something different here,'” he said. “Then, we would have that conversation about the best way to accomplish that.”

The renovations also would allow the shelter to expand its auxiliary dorms into the space now used for overnight shelter, Gonzalez said. There is currently a waiting list for those beds, she said.

To open the auxiliary dorm, the shelter will have to modify its permit with the city to allow more people during the six cold-weather months, Meyer said. It also needs funding.

Meyer presented his request last week to the Douglas County Commission during its 2018 budget hearings. Commissioners were positive, but have not yet approved a final budget and the shelter’s request is among a number of new spending requests not yet resolved. Commissioners were hopeful of only funding half of the request with the city of Lawrence picking up the other half. It doesn’t appear as though that will happen.