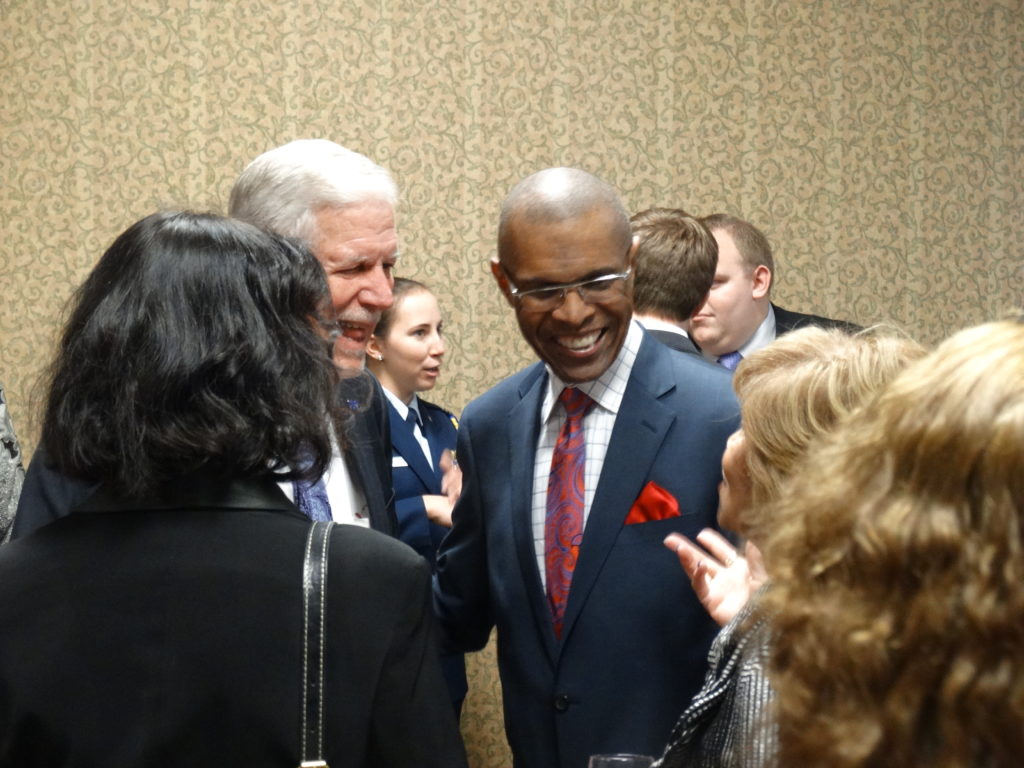 Former University of Kansas football legend Gale Sayers, center, and Kansas State University President Richard Myers chat with friends before the annual Native Sons and Daughters banquet in Topeka Friday where Sayers was being honored as a 2017 Kansan of the Year.

Topeka ? Gale Sayers, the star running back nicknamed the “Kansas Comet,” during his career at the University of Kansas in the early 1960s, returned to an adoring crowd in Topeka on Friday where he was honored at the Native Sons and Daughters of Kansas banquet, an annual event held in conjunction with Kansas Day.

He and retired Air Force Gen. James D. Latham, a Kansas State University graduate and former executive at Lockheed Martin, were named 2017 Kansans of the Year for their lifetimes of service to their communities and the nation.

“I was a freshman when he was a senior and I watched him run over, under, around and through K-State for a year, and then I watched him for the (Chicago) Bears,” Latham said of Sayers during a reception before the dinner.

Sayers speaks little these days, but he still has the beaming smile, firm handshake and engaging charm that endeared him to fans around the world for decades.

Richard Myers, another retired Air Force general who is now president of Kansas State University, recalled flying with Sayers around the world during a USO goodwill tour several years ago.

“It was 2004, maybe 2005,” he said. “I’m not sure if it was around the world, but we went to Iraq and Afghanistan for sure, and about 18 other stops, and Gale was a part of that. We always tried to get a celebrity sports figure, so to have a Hall of Fame NFL figure was a big deal.” 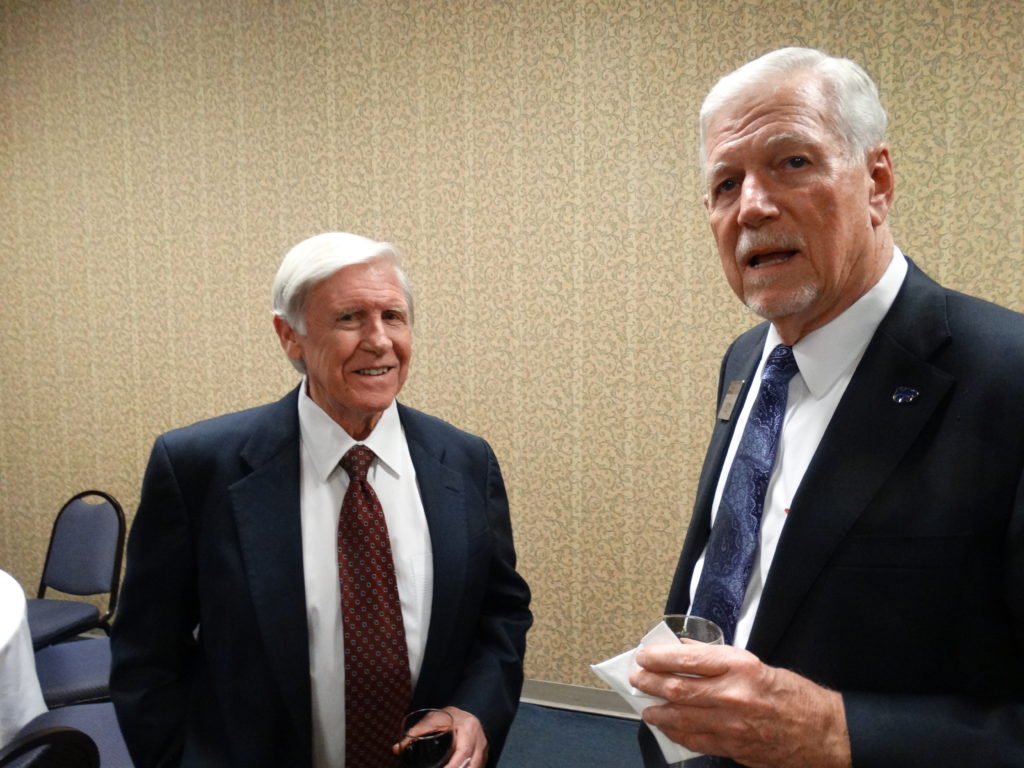 Retired Air Force Gen. James D. Latham, left, visits Richard Myers, another retired Air Force general who is now president of Latham's alma mater Kansas State University, during a reception before the Native Sons and Daughters of Kansas banquet where Latham was honored as a 2017 Kansan of the Year.

An Omaha, Neb., native, Sayers attended KU from 1961 to 1965 and is still considered by many as the greatest open field runner in college football history. In three seasons for the Jayhawks, he rushed for 2,675 yards and was a first-round draft pick in the 1965 NFL draft.

He was drafted by both the Bears of the NFL and the Kansas City Chiefs of the upstart AFL, but chose the Bears. He played for Chicago from 1965-1971 and racked up 4,975 rushing yards and 1,307 receiving yards.

While in Chicago he was a teammate of Brian Piccolo, whose life was cut short by cancer in 1970. Their friendship was depicted in the 1971 made-for-TV movie “Brian’s Song.”

Sayers and his wife are now philanthropists, supporting KU and the Cradle Foundation, an adoption agency in Illinois. They also founded the Gale Sayers Center, an after-school program for children ages 8-12 from Chicago’s west side.

Latham, a native of Johnson County, graduated from Shawnee Mission North High School and attended K-State as an ROTC student where he earned a degree in psychology in 1969 at the height of the Vietnam War. He went on to become a highly decorated pilot. He spent six months as a prisoner of war in North Vietnam after being shot down during a combat mission in October 1972.

During his career, he flew 383 combat missions in southeast and southwest Asia.

From June 1993 to August 1994, he was commandant of the Air Force Reserve Officer Training Corps. He retired 1997 as assistant deputy undersecretary of the Air Force for International Affairs.

After leaving the Air Force, he worked as an executive at the aerospace company Lockheed Martin as director as director of international business development.

He is now fully retired. He and his wife live in Prairie Village.