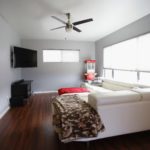 This Tuesday, Jan. 27, 2015 photo shows a room in the house of Dominic Hrabe which he rented out on Airbnb for Super Bowl weekend in Phoenix. (AP Photo/Ross D. Franklin)

The City of Lawrence doesn’t profess to profit from illegal businesses, but soon it will start getting tax revenue from an industry that is outlawed by its own city code.

Thousands of guests rent rooms or entire houses in Lawrence each year via the online booking company Airbnb, and starting next month the company will begin automatically collecting and remitting state and local taxes for those transactions. Those rentals, though, are currently a violation of local ordinances.

City staff members are working on a report on the topic, expected to be completed in a few months, but some local leaders say they are frustrated that Lawrence hasn’t acted faster to address the issue.

“It’s already here, there’s no doubt that it’s here,” said City Commissioner Matthew Herbert. “And so this, to me, is just a classic example of we need to stop making criminals out of perfectly good citizens.”

Airbnb, one of the most popular platforms for short-term rentals, announced Monday that it had made an agreement with the Kansas Department of Revenue to collect and remit taxes via its website. For Lawrence, that includes both a local sales tax and a six percent transient guest tax.

In the past year, rentals from Airbnb, have more than doubled in Lawrence, growing from 2,000 guests to 4,600, according to data provided by Airbnb to the Journal-World. For 2016, those rentals brought in $440,000 for Lawrence hosts. Lawrence’s revenue on Airbnb made the city the most popular Airbnb destination in the state, easily beating out cities such as Wichita, Overland Park and Topeka.

Airbnb, which began in 2009, is just one such website that provides a short-term rental service. Other similar sites include HomeAway and Rent Like a Champion.

Once the report on the topic is complete, it will be up to city commissioners to decide what they want to do with the information provided, which city officials say will include various factors, from zoning to business regulation.

“I think cities need to address this topic somehow, because it’s out there,” said Scott McCullough, director of planning and development. “What should our position be on all these different topics — the zoning, the neighborhood impact, the taxation, the business regulation — because we just haven’t asked those questions yet.”

Currently, there are 110 properties listed on Airbnb for the Lawrence area, ranging in price from $15 to $1,500 per night.

The new tax agreement will go into effect Feb. 1, and is not retroactive. The Kansas agreement is the 15th such agreement in the U.S., according to Airbnb. Statewide, Kansas hosts earned $2.1 million from approximately 20,000 guests last year.

The agreement will replace the previous method that put responsibility to collect and remit state and local taxes on each individual host. However, that’s a responsibility that local hosts haven’t abided by.

The city has no taxing authority, and all local taxes are collected and then remitted to the city by the state. Bryan Kidney, the city’s finance director, said he’s not aware of any such payments being remitted. Though before an agreement is in place, Kidney said there wasn’t a mechanism in place for hosts to pay their taxes.

“I have access to all the reports, and I’m not aware of any non-hotelier, any short-term place that would be doing it,” Kidney said.

Starting in February, the transactions in Lawrence will automatically pay state and local sales taxes, as well as the additional 6 percent Lawrence transient guest tax, according to Ben Breit, of Airbnb Midwest.

That amount would amount to a fraction of a percent of the city’s approximately $87 million general fund budget for 2016. At the same time, the city’s guest tax also helps fund local events through a $150,000 grant program, which is set to provide support to 15 events this year.

Airbnb, which was founded in 2009, started with a few guys renting out air mattresses in their apartments in San Francisco, Breit said. He said it wasn’t until a year ago that the company began making agreements with states and cities to allow its transactions to automatically collect and remit applicable taxes.

“Ultimately, the responsibility for the taxes is with the host,” Breit said. “And that is still the case, even though we’re collecting and remitting for them now. It’s not our money, it’s their money.”

Kidney said the city would likely get its first payment sometime in April, following the completion of the first month of the new agreement.

But Herbert said he thinks the impact that short-term rentals have on the local economy isn’t just about potential tax revenue for the city, but also about the revenue that residents are able to make by renting their homes or rooms in their home.

Herbert, a high school teacher, also runs a rental management company in Lawrence, but says he doesn’t run any short-term rentals. He said his mother-in-law owns a property in Douglas County that is listed on Airbnb — he said his wife helps with the online booking process — as a means to offset medical bills. He said it’s an example of how residents use Airbnb to help make ends meet.

“In a lot of cases, these are people that are doing it to try to keep their mortgage paid,” Herbert said. “We talk about affordable housing in this community, and too often we restrict that to just people being able to pay their rent, things of that nature.”

The upcoming tax changes could hasten the need for the city to decide how it wants to address the industry.

In 2016, Lawrence’s largest spikes in Airbnb guests occurred during big football weekends such as the Nov. 12 game against Iowa State, the Nov. 29 game against Texas and the Oct. 22 game against Oklahoma State, according to Airbnb. The most expensive rental — $1,500 per night with accommodations for up to 10 people — is a listing that notes its proximity to Memorial Stadium.

Hosts can rent out an entire house or just one room, and the latter accommodation accounts for about 60 percent of Lawrence properties, according to Airbnb. Breit said that all Airbnb properties, regardless of arrangement, will be subject to the new tax agreement.

And as of now, no matter the type accommodation, all violate local ordinance if located within the city limits.

Because the code doesn’t allow for short-term rentals, McCullough said that currently there isn’t even a system in place for hosts to get their properties licensed to run such a business.

“There is really no permit available for it,” McCullough said. “Our code just doesn’t allow it. You’ve got to be a bed and breakfast or a hotel or a motel to do transient accommodations.”

Despite the lack of regulation, there is still some city oversight for short-term rentals.

McCullough said that the city will ask a host to stop renting their property if a complaint is received.

“We’re not ignoring it,” McCullough said. “We’re actively enforcing when we get a complaint.”

McCullough said in general complaints are from neighbors, and two such complaints were received last year. He said that generally, complaints are associated with the impact of transient use on the neighborhood.

“Just the unknown of who is in the house next door, what new cars are in the neighborhood, the traffic that it brings, and the potential to become a party house, if not a party house for that weekend,” McCullough said. “And so it’s what differentiates the traditional, single-family residential neighborhood from transient accommodations. There’s a reason that zoning has that distinction.”

McCullough said in those instances, the city’s initial response is to send a letter asking the host to cease operating, and further action can be pursued if the host does not comply.

Given his experience in the rental market in Lawrence, Herbert said he actually sees a short-term rental as having less impact on the neighborhood than a long-term rental because he said there’s often a greater need to keep the property in good shape.

“I don’t see this as something that’s going to come in the community and start destroying and eroding our neighborhoods,” Herbert said. “The impact that long-term rentals have on a residential neighborhood is going to be far greater than the impact that Airbnb would ever have.”

Still, Herbert acknowledged that the industry has its critics who say it encroaches on existing local hotels. Several local hotel operators did not return calls for this article. However, Herbert said that home-sharing and short-term rentals are where trends are heading.

“We’re just asking for these individuals to be given a chance to operate in the same free market that everyone else operates in,” Herbert said. “To me, it’s no different than (the ride-sharing company) Uber; taxi companies don’t like Uber, but this is kind of a 21st century shared economy.”

When considering zoning and regulation, the report will include a summary of what other cities are doing. McCullough said the report will indicate how cities similar in size and characteristics to Lawrence are handling short-term rentals.

McCullough said that information can be used by commissioners to decide whether they want to address the regulation of short-term rentals, and what might that procedure look like should they elect to do so.

McCullough said information is still being gathered for the report, which is not yet in its first draft. He said he expected it to be complete and brought before the City Commission within the next few months.

“What we haven’t done, and what this research will help us get direction to, is understand if we want to take a different direction with it and build codes that accommodate the use,” McCullough said.