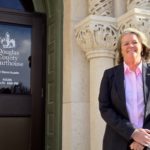 Michelle Derusseau will be sworn in today as the first newly seated Douglas County elected official in eight years. She will attend her first meeting Wednesday as a commissioner, succeeding the retired Jim Flory in the 3rd District seat.

Michelle Derusseau will stand out among the seven officials to be sworn in today to four-year terms to Douglas County offices.

The other six elected officials — County Clerk Jamie Shew, District Attorney Charles Branson, Sheriff Ken McGovern, County Treasurer Paula Gilchrist, Register of Deeds Kay Pesnell and 2nd District County Commissioner Nancy Thellman — will be sworn in for at least the third time. Derusseau will be the first elected county official to be sworn into office for the first time since Commissioner Mike Gaughan was selected in April 2009 to fill the unexpired term of Charles Jones in the county’s 1st District.

For Derusseau, her new office seems the logical destination for a journey that started when she worked on a political campaign as a sixth-grader in Shawnee. After further nurturing her political interests by helping with the congressional campaign of a friend’s uncle in high school, she arrived in 1982 in Lawrence as a University of Kansas freshman intent on majoring in history and political science. Life, however, pointed her in a different direction, and she would eventually earn a certificate in human resources from the University of Missouri at St. Louis.

After taking her first full-time job in Lawrence with the KU Endowment Association, Derusseau moved on to be the business director of a local beer distributor. She remained civically involved through volunteer work with a number of community service organizations, before rekindling her political interests by heading the 2014 bond referendum campaign for a new Lawrence Police Department headquarters. The measure failed, but Derusseau said it was enlightening to hear voters in post-referendum forums say their no votes were in protest against the city’s support for Rock Chalk Park and the Lawrence Public Library projects. Others said they disliked the use of sales tax to finance the project, she said.

The lessons she took away from the experience was that she still enjoyed politics and teamwork involved in the campaign.

A year after that campaign, Derusseau, who has returned to work at KU Endowment, took a more personal leap into the political arena. Although she announced her candidacy for the County Commission in January 2016 after Commissioner Jim Flory made official his decision not to seek a third term, she started attending weekly County Commission meetings two months earlier after hearing the seat would probably be open.

Those meetings were only part of the preparation and effort Derusseau put into her campaign. She attended all the township meetings in the 3rd District, met with the county department heads and leaders of various community agencies.

She also ran an aggressive campaign that brought her to many homes in the district.

“I loved it,” she said. “What surprised me the most was I really enjoyed going door to door. I met a lot of wonderful people. I had one young man surprise me because he knew who I was when I came to the door. I asked him how he knew me, and he said he Googled me.”

She will join the commission as the only Republican on the board, but don’t look for Derusseau to be the source of party division of the kind seen in Washington, D.C., and Topeka. She has no agenda, she said, and expects to forge the same kind of bipartisan working relationship with Gaughan and Thellman as her predecessor.

“That’s what is neat about local government,” she said. “At the end of the day, it was not about the Ds and not about the Rs but what is best for Douglas County. We may have differences about how we get to the finish line, but we all have the same intentions.”

Derusseau’s 14-monthlong County Commission tutorial included preparation on the two biggest issues she will confront in her first year: the proposed $30 million expansion of the Douglas County Jail and construction of a mental health crisis intervention center.

Derusseau has attended Douglas County Criminal Justice Coordinating Council meetings since the council’s creation in March and the town hall presentations of the past two years.

Her positions remain consistent with those she stated in the campaign, Derusseau said. She sees no rush to make a decision on the proposed $30 million expansion of the Douglas County Jail while the Criminal Justice Coordinating Council explores promising initiatives to reduce the jail’s population. She does, however, agree with jail officials that structural problems are behind the expansion proposal.

“It’s not about incarcerating more people,” she said. “I look at it as a hospital. There are times when all the beds in the maternity ward or ICU aren’t filled, but hospitals have to design for the number of beds they need at peak times.”

Derusseau takes a similarly cautious approach on moving forward with the crisis intervention center. For it to be effective, the county has to have mental health programs in place for patients once they are stabilized, she said. Without that support, patients released from the center would slide back into crisis, she said.

Going forward with the crisis center alone ignores the needs for programing and space, Derusseau said.

“It’s a big question,” she said. “Do we only want to address those out in the community with mental illness? Do we just ignore those who have to stay in jail because of the crimes they have committed? I want to address everything.”

One issue Derusseau said the commission would have to address in the coming year was security at Bert Nash Community Mental Health Center because of changes to the state’s open carry law. Starting in July, the county must allow open carry in public buildings unless there are security measures and armed security personnel on scene.

“That’s something we’re going to have to figure out,” she said. “There have already been incidents when people came into that building with a gun. We have to protect our citizens, clients and staff. It’s not going to be cheap or easy at Bert Nash with two parking lots and entrances.”

As a rural Douglas County resident, Derusseau said was sensitive to the concerns of those from rural and smaller communities about representation on the County Commission.

“If the election had gone the other way, all three commissioners would have been Lawrence residents,” she said. “We are one of the five largest counties in the state, and all the other five counties have gone to at least five-member commissions. It might be time to look at expanding the Commission to five for equal representation. We have to remember there are people in the county who do not live in Lawrence.”