Tom Keegan: Malik Newman emerging from the haze of a concussion 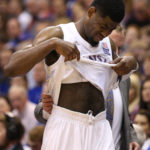 Kansas guard Malik Newman (14) leaves the game with a concussion during the second half, Sunday, Dec. 10, 2017 at Allen Fieldhouse.

Nobody was surprised to hear, after Sunday’s loss to Arizona State, that Kansas guard Malik Newman had suffered a concussion.

As he sat on the Allen Fieldhouse floor, eyes squinting then shutting, Newman had the look of a boxer trying to regain a clue as to where he was and what he was doing there. The knee he took to the head in the final minutes gave him what he said was the first concussion of his life.

The very next day, Newman was taking a final exam.

“The good thing about it is, so far, I’ve only had one (final) and it wasn’t a good one,” Newman said. “I was just looking at the paper the whole time. I mean, the words started looking like they were moving over the whole paper at the end. I’m sure I did well.”

Two days later, he was back participating in practice.

“He was a little bit limited yesterday, so we’ll see how today goes,” Kansas coach Bill Self said Thursday. “No reason why he can’t be full speed Saturday — at least, that’s what I’ve been told.”

Speaking to reporters early Thursday afternoon, Newman said, “I feel just a few side effects, but I’m doing much better.”

If Newman suffers a setback and has to scratch from the game, Self would turn to freshman Marcus Garrett and debuting Arizona State transfer Sam Cunliffe to fill Newman’s role for the 7 p.m. tipoff vs. Nebraska at Pinnacle Bank Arena in Lincoln.

A 6-foot-3 guard with two remaining years of eligibility after this season, Newman averaged 11.3 points and shot .379 from 3-point range as a freshman two seasons ago at Mississippi State. He’s averaging 11.6 points and shooting .405 from long distance for Kansas. His season-high 17 points came vs. Toledo.

At times, Newman looks as if he’s trying to figure out how to fit in, which can lead to thinking instead of reacting — never a good state of mind for an athlete.

“I don’t think his activity level is very good at all,” Self said. “I think he’s a good offensive player. He can score, but it would be nice if he can do some things to create some energy, as opposed to basically just being a shooter, so to speak.”

Newman hasn’t yet stood out the way most had hoped after a red-shirt season in which he had flashes of brilliance in practice.

“I think he can play faster,” Self said. “I’m not talking shoot it faster. I’m talking movementwise. He’s doing fine. I think he’d be the first to tell you he can do a lot better.”