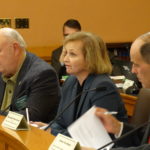 Topeka ? New limits on the ability of cities and counties to raise property tax revenues from one year to the next are causing severe problems for cities and counties, officials representing local governments told an interim legislative committee Thursday, but most members of that panel appeared unmoved by those complaints.

The new law, which was passed in 2015 but is just now taking effect, is commonly known as a property tax lid because it generally caps how much of an increase in property tax revenue cities and counties can levy from one year to the next at the rate of inflation, unless they hold a public election to get voter approval.

“Our member cities are still very strongly opposed to the tax lid. We think it’s an infringement on the very idea of representative democracy,” said Trey Cocking, deputy director of the League of Kansas Municipalities, a group that represents city governments. “Our members were elected to make these decisions, and we obviously think these decisions are best made at the local level.”

City and county governments operate their budgets on a calendar year cycle, but their budgets have to be approved in the August preceding the year they take effect.

This year, three city governments called elections to get voter approval for budgets that exceeded the tax lid limits, Cocking said. The largest of those was Onaga, in Pottawatomie County, a town of roughly 700 people. The cities of Tescott, in Ottawa County, population roughly 300, and Pretty Prairie, a town of 672 people in Reno County, also held elections.

In Onaga and Tescott, the cities sought approval for higher tax revenues to pay for road maintenance, and both of those passed, Cocking said. But the tax request in Pretty Prairie, which sought additional money for golf course maintenance, failed.

But Cocking said cities throughout Kansas are facing increased costs for things like employee health insurance, and the tax lid does not allow them to keep up with those costs.

“We are hearing from cities that, this year, have had their health care costs go up anywhere from 10 to 58 percent,” he said. “The city of McPherson is facing a 10 to 13 percent increase in health care costs, and that’s after they increased their deductibles by 250 percent.”

Some lawmakers, however, have said the “lid” is more like a sieve because there are numerous exceptions to the rule, such as taxes that are raised to pay for enhanced law enforcement or other public safety functions, or taxes raised to pay the cost of complying with state or federal mandates.

Cocking noted, however, that one of the areas of public spending that was not excluded from the lid was taxes levied to pay for leases of public buildings. Because of that, he said, some cities, including Stockton, population 1,329, have had their bond ratings downgraded.

Rep. Ken Corbet, R-Topeka, whose district includes part of Osage County, said that county had been raising property tax revenue at rates far above the rate of inflation before the tax law took effect.

“I understand your situation with health care costs,” Corbet said. “But you’ve got to also realize that the people who are paying those taxes, families with kids, also are paying the same increase as everybody else.”

Melissa Wangemann, general counsel for the Kansas Association of Counties, said her organization also would like to see an exception for rising employee costs. A bill introduced in the House during the 2017 session would have provided that exception, she said, but that bill never made it out of committee.

“The lowest quote I have heard from my counties for health care was a 7 percent increase in 2018,” she said. “This year’s consumer price index — the measurement for the tax lid — was 1.4 percent.”

But Sen. Caryn Tyson, R-Parker, who is also running for the 2nd District congressional seat, said she still hears from constituents on a routine basis complaining about increases in their property tax bills, and she cited Douglas County as an example, even though her Senate district does not include any portion of Douglas County.

Tyson said a person from Lawrence had emailed her, saying that person’s property tax bill was going up 10.5 percent. That, however, was the combined effect of increases in city and county taxes, which are covered by the lid, as well as the Lawrence school district, which is not covered by the lid.

The committee will continue meeting Friday to review other tax issues, including the provision in the Kansas Constitution that says agricultural land is taxed according to its production value instead of its fair market value, something officials have said is a multibillion-dollar tax break for the agriculture industry.

The panel will then vote on what recommendations to include in its final report to the 2018 Legislature.