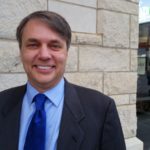 Colyer said Clay Barker had started as his special assistant, stepping down after six years as the state GOP’s executive director. Kara Fullmer joined his staff July 31 as his new press secretary.

Republican Gov. Sam Brownback plans to resign because President Donald Trump has nominated him to serve as U.S. ambassador-at-large for international religious freedom. But Brownback hasn’t set a date for his departure because the timing of a U.S. Senate vote on his nomination isn’t certain.

Brownback and Colyer are both conservative Republicans who ran together on a single ticket in 2010 and 2014.

Barker became visible across the state in the GOP job because he often served as the party’s spokesman while running its day-to-day operations. State GOP Chairman Kelly Arnold called Barker a “steady hand” with a firm grasp of strategy. Barker also is an attorney.

“Everyone who’s worked with Clay knows how great a worker he is, and organizer,” Arnold said. “There’s not much that we’ve thrown at him that he’s not been able to do.”

Fullmer is a former WIBW-TV reporter who more recently has been operating her own small business and raising four children.

Brownback spokeswoman Melika Willoughby confirmed that Laura McCabe, who had been serving as Colyer’s press secretary, no longer worked for his office and had not moved to the governor’s office.

“We’re in a time of transition,” Willoughby said.

Arnold said he and the Kansas Republican Party’s other elected officers will take on Barker’s former duties while they search for a replacement.