Colyer confirms bid for full term as Kansas governor in 2018 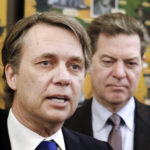 TOPEKA ? Lt. Gov. Jeff Colyer confirmed Tuesday that he will seek a full, four-year term as Kansas governor next year after he assumes the office upon Gov. Sam Brownback’s departure for an ambassador’s post.

Colyer announced the appointment of a treasurer for his campaign for the Republican nomination in 2018, a step that’s required for him to accept contributions legally. He declared in a statement that he is “fully committed to doing the work necessary to win.”

The announcement came less than an hour after Colyer ducked a question from reporters about the race following a public appearance. He jumped into a crowded race for the GOP nomination that includes Secretary of State Kris Kobach and Insurance Commissioner Ken Selzer.

“You’ll be hearing a lot from us about what’s happening on next steps,” he told reporters. “This is a long conversation.”

Brownback is serving his second term and couldn’t run again, but President Donald Trump nominated him last month to serve as U.S. ambassador-at-large for international religious freedom. Brownback has not set a date for his departure, and the timing of a U.S. Senate vote on his nomination is uncertain.

Colyer and Brownback are both conservative Republicans who ran together on a single ticket in 2010 and 2014. Colyer, a reconstructive plastic surgeon, has been a spokesman for the administration on health care issues and told reporters that he wants to focus on improving the economy.

Voters last year turned on Brownback’s fiscal policies, ousting some of his conservative allies from the Legislature. Democrats and moderate Republicans this year enacted an income tax increase over a Brownback veto to help close budget shortfalls, rolling back past tax cuts championed by the governor.

“If there’s one thing that unites all Kansans, it’s that there’s no appetite for a third Brownback term,” Kansas Democratic Chairman John Gibson said in a statement.

While Colyer has been a strong ally and loyal lieutenant governor for Brownback, in recent days, he’s talked about bringing a “new tone” to the administration.

“I want Kansans to know they’re going to have a governor who will listen to them, that Topeka will talk less and listen more,” he said Tuesday.

Besides Colyer, Kobach and Selzer, four other Republicans have appointed treasurers for campaigns for governor. They are former state Sen. Jim Barnett of Topeka, the party’s 2006 nominee; Wichita businessman Wink Hartman; Leawood businessman Patrick Kucera, and ex-state Rep. Ed O’Malley, of Wichita, the president and CEO of the Kansas Leadership Center.

Jennifer Winn, a pro-marijuana activist and Wichita businesswoman, still has an active campaign committee from her unsuccessful 2014 bid for the GOP nomination.