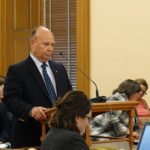 Kansas Secretary of Corrections Joe Norwood tells an interim legislative committee Thursday, Aug. 3, 2017 that low wages are making it difficult for his agency to attract and retain correctional officers. But he denied that staffing shortages are related to a series of recent violent incidents at the El Dorado Correctional Facility.

Topeka ? The head of the Kansas correctional system said Thursday that low wages are making it hard for his agency to recruit and retain prison guards, especially at the Lansing and El Dorado state prisons, but he denied any suggestion that staffing shortages were related to a series of recent violent incidents at the El Dorado prison.

“We had every security post filled at the El Dorado facility,” Corrections Secretary Joe Norwood said. “So the staffing situation, other than some of the staff working on overtime, all of those posts were filled.”

Norwood updated the joint Legislative Budget Committee on Thursday about staffing issues and the recent series of incidents at the El Dorado prison.

That’s especially bad in northeast Kansas, he said, because people trained in correctional work can easily make more money working in a county jail or a federal prison.

As a result, he said, even those who do take a job with the state of Kansas don’t stay on the job very long. Roughly 73 percent of all entry-level correctional officers working for the state have been on the job less than five years.

In addition, he said, because of rising health insurance premiums for state employees, correctional officers have actually seen a net cut in their take-home pay since 2015.

In mid-July, the Department of Corrections reported that it had 260 vacant uniform positions statewide, including 87 at El Dorado and 78 at Lansing.

Because of those shortages, the department recently declared the staffing shortage at El Dorado to constitute a “state of emergency” that, under terms of its labor contract, allows the department to require employees to work as much as 18-hour shifts.

Robert Choromanski, executive director of the Kansas Organization of State Employees, said the department actually has been requiring officers to work overtime since late June, although it didn’t declare an emergency until recently. And he said officers have no choice but to follow those orders.

“There’s no other recourse that we can do except hope that the Legislature hears our cries and concerns,” he said. “The longer we work 16-hour days … the less ready they are to anticipate any danger from the inmates, and it increases the risk to the public at large.”

The department has confirmed at least three incidents since May when inmates at the El Dorado prison refused to return to their cells. In addition, there have been at least two stabbings at the prison in recent weeks that resulted in the victims being transported to an outside hospital.

Norwood, however, said those stabbings were the result of gang activity among the inmates and were not related to the staffing shortfalls.

But Sen. Laura Kelly, D-Topeka, who serves on the committee, said she believes the staff shortages have been a factor in the string of incidents at El Dorado.

“I worked for a very brief time in a prison when I was just getting out of undergraduate school,” she said. “The inmates can sense when staff is in turmoil itself, and they act upon that. So it’s hard for me to believe that the inmates at El Dorado in particular are not fully aware of the 46 percent turnover rate that’s going on.”