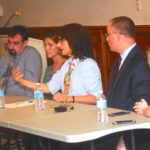 University of Kansas professor Charlene Muehlenhard, center, responds to a question at a panel discussion on sexual violence Wednesday, Sept. 21, 2016, at the Watkins Museum of History. Joining her on the panel were, from left, KU law professor Corey Rayburn Yung, Jen Brockman, director of the KU Sexual Assault Prevention and Education Center, Assistant District Attorney Mark Simpson, and Rachel Gadd-Nelson, of the Lawrence Sexual Trauma and Abuse Care Center.

Harmful media messages on rape abound, University of Kansas law professor Corey Rayburn Yung told an audience of about 30 people Wednesday at the Watkins Museum of History, going so far as to say that classic cartoon character Pepé Le Pew is a rapist who perpetuates a harmful view of male sexual aggression.

Yung was part of a panel discussion on sexual violence that explored such topics as how the media reports on sexual violence, what friends and family can do for victims and a few local solutions. Joining Yung on the panel were Jen Brockman, director of the KU Sexual Assault Prevention and Education Center; Charlene Muehlenhard, KU professor of psychology and women, gender and sexuality studies; Assistant Douglas County Attorney Mark Simpson; and Rachel Gadd-Nelson, of Lawrence’s Sexual Trauma & Abuse Care Center.

Expanding on his short characterization of Pepé Le Pew, Yung noted how the cartoon skunk so doggedly pursued a cat who had a white stripe painted down her back that she attempted suicide. It was but one mass-media example of a harmful message, he said.

“There are so many media messages of women guarding their chastity against an aggressive sexual male,” Yung said. “The message is (that) not taking no for an answer is the way to get women.”

Yung also contrasted the amount of media attention given to fraudulent or false reports of sexual violence, such as the Duke University fraternity rape case or Rolling Stone Magazine’s story of a reported sexual assault at the University of Virginia, with incidents in which reports of actual rapes were ignored by authorities. One such story was of the so-called Cleveland Strangler, who was arrested in 2009 after police discovered 11 bodies at his house when they responded to a woman’s rape accusation. Yung said that arrest came after authorities ignored three previous rape reports.

Often, victims don’t report sex crimes immediately after they have occurred, Yung said, which can lead authorities to dismiss such reports.

Confidants should make sure they let people reporting sex crimes know that they believe them, Gadd-Nelson said, especially if they are the first to hear of the incident.

Brockman said it was also important to make the person reporting an incident feel safe, as well as to keep in mind that not everyone reacts the same way to trauma. Beyond that, panelists agreed it was OK not to know what to do because there were professionals available to help at organizations such as the Sexual Trauma & Abuse Care Center.

In response to a question on the importance of peer action in the face of institutional indifference to sexual violence, Muehlenhard said it was important for bystanders calling out sexually aggressive acts to follow up with action to change an aggressor’s behavior. Otherwise the aggressor would just “ping pong” to the next opportunity, she said.

The panelists agreed that a ripe area for greater bystander education was Lawrence bars, particularly those catering to college students. They advocated for training bartenders and other staff to recognize how predators use alcohol to take advantage of women and to intervene in potentially hazardous situations.