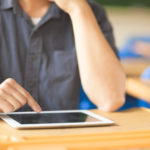 In Lawrence, some 400 secondary school students go without internet access at home, according to a survey conducted last spring by the Lawrence school district.

A $39,000 gift from the Lawrence Schools Foundation, presented to district officials at Monday’s school board meeting, will significantly reduce that number, providing Lawrence middle and high schools with 200 Kajeet hot spot devices.

The contribution, said Jerri Kemble, assistant superintendent of technology and innovation, marks an important step in the progress of the district’s digital equity goals, allowing students who otherwise would be left without reliable Wi-Fi after school hours to access digital textbooks and relevant educational information from home.

It also creates a ripple effect that extends beyond the individual student, Kemble said.

“I think we’ve got to think about the other piece when kids are connected, and that’s the family and how they become connected to the school,” she said of having at-home internet access. “It really engages them on what’s going on in the schools (and) allows families to see grades. It also allows families to access health benefits, maybe even a job, and other things.

“So when we put internet in the home, we’re not only affecting one student — we’re affecting an entire family.”

Thank you to the Lawrence Schools Foundation for supporting Learning Forward, Future Ready! This check for $39,000 will support equitable access to the Internet outside of school for our students.

As of the 2015-2016 school year, more than 90 percent of students districtwide — or about 10,000 students — were enrolled in one or more classes that rely on a digital textbook. The district already has 120 hot spot devices available in its secondary schools, beginning with a pilot program last year at Lawrence High School and Free State High School, where wait lists were consistently long.

Kemble pointed out that the hot spot devices are compliant with the Children’s Internet Protection Act, filtering out any inappropriate content, and can also be monitored activity-wise by the schools.

She said the new hot spot devices should arrive at schools in four to six weeks. In the meantime, she and other district leaders are still looking to close the internet gap for all 400 families living without Wi-Fi. They’ll need 80 hot spot devices to reach that goal, which superintendent Kyle Hayden said could be reassessed depending on demand.

“I’m excited,” Kemble told the school board Monday. “I never thought this could happen this fast.”

• Heard an update from Kemble on the progress of the district’s “Learning Forward Future Ready” initiative at Lawrence middle schools.

• Were asked to endorse the local “Tobacco 21” initiative, a nationwide movement aimed at raising the legal age to purchase tobacco and nicotine products from 18 to 21. The school board will add the item to its consent agenda for the Sept. 26 board meeting.

• Approved a real estate contract between the school district and Douglas County. As part of the deal, the district would hand over its facilities and operations property at 146 Maine St., plus $500,000, in exchange for a former Douglas County Public Works site at 711 W. 23rd St.

The next school board meeting will be held at 7 p.m. Sept. 26 at the Lawrence school district offices, 110 McDonald Drive.