Tom Keegan: Too early for KU to pass on run 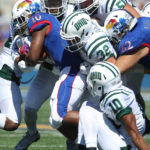 Kansas running back Khalil Herbert (10) is wrapped up by a pack of Ohio defenders during the second quarter on Saturday, Sept. 10, 2016 at Memorial Stadium.

First, a moment to wish everyone involved in the historic day a happy anniversary. That’s right, today is the seven-year anniversary of the Kansas football team’s most recent road victory, a 34-7 blasting of UTEP.

The Jayhawks will try to avoid being road kill for the 39th consecutive time (including three games at neutral Arrowhead Stadium) Saturday in Memphis, where kickoff is scheduled for 11 a.m. against the Tigers, 20-point favorites.

Kansas football coach David Beaty vowed his team would learn from its sloppy mistakes, bring better focus and play a much cleaner football game in Memphis than in Saturday’s 37-21 loss to visiting Ohio.

Minimizing unforced errors certainly would be a welcome change of pace, but a more disturbing, less correctable flaw casts a pall on any attempt to put a positive spin on the season outlook.

As unsightly as the sloppy play was, the state of KU’s run-blocking crushes optimism even more powerfully. Four different running backs, a wide receiver and a quarterback combined for 15 rushing attempts that netted 35 yards, a 1.7 average. It looked even worse than those numbers.

Running the football resulted in such futility that it’s worth asking whether Kansas should pretty much abandon the run and go with an almost exclusive air attack.

The answer: Not yet.

Jordan Shelley-Smith, sidelined by a concussion the first two games, could return, which can’t hurt. He’s in his fifth year in the program and third as an offensive lineman. Three starters are in their second years in the program and a fourth is a true freshman.

Plus, Kansas proved last season it could run the football against Memphis.

One year ago today, Memphis blasted Kansas, 55-23, in Lawrence, but the Jayhawks rushed for a respectable 194 yards. Ke’aun Kinner, averaging 7.1 yards per rush, rushed for 113 yards. All the starting blockers except Bryan Peters remain on the roster so in theory Kansas should be able to find the same success running the ball as it did a year ago today. Might as well give it a shot, even though it probably won’t work. It takes years to build an offensive line, not a week.