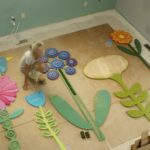 Meg Cundiff kneels among some of the pieces of an assemblage she made for a Fort Worth, Texas, children's hospital. The artist, who is building a new home near Baldwin City, has created several such works for children's hospitals and clinics.

Standing in her yard at the base of Baldwin Hill near the cairns of limestone rocks mixed with odd bits of rusty metal she has sculpted along the driveway, Meg Cundiff confesses she always finds energy in art.

“I was the kind of kid who would hide under the sheet at night drawing with a flashlight, so my parents would make me go to sleep,” she said.

A big part of that child remains in the artist, who embraces the word “whimsical” to describe her art. Not for Cundiff is the need of some artists to mine dark experiences or emotions for subject matter.

“Everything I do has a childlike quality,” she said. “I’ve always been grateful and optimistic. I’ve been very blessed.”

Another adjective that fits Cundiff in recent weeks is “hectic.”

Spread out on saw horses and whatever available floor space she could locate in an old barn and the garage and house she is building in the Vinland Valley were unfinished parts of an art installation that is to be assembled on two walls of Cook Children’s Hospital in Fort Worth, Texas.

Half of the work was already loaded on shelves filling the rear of a rental van that was to leave the next day.

“Who needs sleep? Who needs to eat?” Cundiff asked. “(The hospital has) been very patient with me — amazingly patient.”

It’s not procrastination that had Cundiff racing the clock to finish the project. She’s been a little preoccupied lately, moving from Bonner Springs to Baldwin City and building a home on a lot surrounded by ancient timber.

Pedestrians in downtown Baldwin City may have viewed parts of the installation if they looked through the front windows of the storefront Cundiff rented for eight months at the corner of Eighth and High streets. Behind the front windows were 6- to 7-foot-tall flowers, trees or other plants cut from plywood.

She found the storefront she recently vacated too dark to complete the work, Cundiff said. So she relocated everything to her unfinished home for a final push. Joining the larger vegetative pieces are smaller cutouts of birds, butterflies and ants, all brightly painted and adorned with tiles, marbles, shiny baubles and found objects.

“I would dumpster-dive head first for the right stuff,” she said. “If you have any old things to throw away, leave it at my driveway gate.”

She has made her living as an artist since graduating from the University of Kansas in 1982 with a Bachelor of Fine Arts degree, although Cundiff admits her career path — which includes time as an illustrator for Hallmark Cards — is a bit unconventional for a professional artist.

“I’ve never had a gallery show,” she said. “I’ve thought about getting an agent, but I don’t have one. I don’t have a website. I got all my commissions from word of mouth.”

The Fort Worth commission stemmed from a piece she did for a Ronald McDonald House in that city, which was done through a friend in Kansas City, Mo. Her works also adorn the family room of Children’s Mercy Hospital, a children’s clinic on Southwest Boulevard and the Three Dog Bakery in Kansas City, Mo.

Cundiff has also illustrated a number of children’s books, and will follow up her work on the hardcover edition of the book “Orbiting the Giant Hairball” with illustrations for an online version of the book on untangling obstacles to corporate creativity.

Don’t expect a different point of view to emerge from Cundiff’s art. If anything, it may become more upbeat, as she’s found her move to Baldwin City liberating on several levels.

“I fell in love with Baldwin the first time I visited,” she said. “There’s so many creative people in the community. Baldwin City just lights my heart up. I love nature, as you can tell by my choice to live out here. After this is finished, I can take a week off in the woods.”