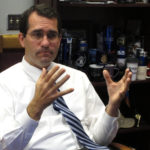 Kansas Attorney General Derek Schmidt is pictured in this file photo from Oct. 10, 2014.

Wichita ? Kansas’ attorney general withdrew on Wednesday a court brief that cites the slavery-era Dred Scott decision to support the state’s position that the Kansas Constitution does not guarantee a right to an abortion.

The reference made in a filing submitted to the Kansas Supreme Court a day earlier does not accurately reflect the state’s position, is not necessary for its legal argument and should not have been made, Attorney General Derek Schmidt said in a statement.

“Neither the State nor its attorneys believe or were arguing that Dred Scott was correctly decided,” he said. “Nonetheless, the reference to that case was obviously inappropriate, and as soon as I became aware of it today, I ordered the State’s brief withdrawn.”

In the infamous Dred Scott decision, the U.S. Supreme Court ruled a black person whose ancestors were sold as slaves could not be a U.S. citizen and therefore had no right to sue. It also ruled in the decision that the federal government could not prohibit slavery in its territories.

“It is a very odd thing, an unusual thing to have people relying on Dred Scott in support of a legal position that was espoused in Dred Scott,” said Richard Levy, a law professor at the University of Kansas.

The state cited the 1857 decision as the Kansas Supreme Court considers whether the state’s constitution guarantees the right to an abortion. The appeal stems from the refusal of the Kansas Court of Appeals to implement the state’s first-in-the-nation ban on a common second-trimester abortion method.

In a split decision, the Court of Appeals said the Kansas Constitution protects abortion rights independently from the U.S. Constitution. If upheld, the ruling would allow state courts to protect a woman’s right to end her pregnancy beyond federal court rulings.

“The unfortunate use of this citation should not distract from the important question the Kansas Supreme Court faces in this case: Whether the Kansas Constitution establishes a state-level right to abortion,” Schmidt said. “The State will continue to argue vigorously that it does not.”

The state used the Dred Scott case to bolster its argument that the Declaration of Independence had no legally binding effect.

Kansas cited the decision in response to an amicus brief filed by the American Civil Liberties Union in support of abortion rights.

Doug Bonney, chief counsel for the ACLU’s Kansas chapter, told The Wichita Eagle that the state’s decision to cite the Dred Scott decision was unusual.

“When I saw the table of cases, when I just started scrolling through it, I thought, ‘What? Really?” Bonney said.