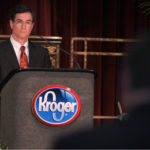 Emporia ? Emporia — David Dillon, retired chairman and CEO of The Kroger Co. and a University of Kansas alumnus, will head the search committee for a new KU chancellor.

The Kansas Board of Regents voted on Wednesday to appoint Dillon as chairman of the committee charged with finding a replacement for KU Chancellor Bernadette Gray-Little, who has announced she will step down from the job at the conclusion of this school year.

The Board also formally announced that the search process would be closed, meaning names of applicants and finalists will not be publicly shared. Regents also voted to hire the firm of R. William Funk and Associates as search consultant.

Board chairwoman Zoe Newton said Wednesday’s actions kick off the KU chancellor search process. Newton said the search committee — composed of representatives from various KU constituencies — will be assembled in coming weeks, and the Board will vote to approve its membership as soon as next month. Newton said the Board’s goal is to release a job posting no later than February 2017.

The ultimate goal is for the Board to hire and announce a new chancellor by June 2017 who can start work on or around July 1, 2017, the Board’s request for proposals from search firms indicated.

Newton and Regent Shane Bangerter specifically thanked Board of Regents vice-chair Dave Murfin, who was absent from Wednesday’s meeting, for his role in helping identify and present Dillon as the KU chancellor search committee chairman. Murfin, a fellow KU alumnus, is a Wichita businessman who also serves with Dillon on the KU Endowment Board of Trustees.

“This is a huge job and a very important job, and finding and selecting and appointing a chair is a very important step that we need to take in this process,” Bangerter said. “I think Regent Murfin has located not just an adequate person but a stellar person that bleeds crimson and blue and is respected across the state and the nation.”

Dillon was student body president at KU, where he earned his bachelor’s degree in business in 1973, according to information from the KU Alumni Association. He earned a law degree from Southern Methodist University. The Alumni Association awarded Dillon its Fred Ellsworth Medallion, the association’s highest honor for alumni, in 2004.

Dillon currently serves on the executive committee of the KU Endowment Board of Trustees, which lists his home address as Kansas City, Mo. He also serves as vice-chairman of the KU Hospital Authority Board, a position he’s held since September 2015.

Kroger, based in Cincinnati, employs more than 400,000 associates serving customers in more than 3,500 supermarkets and other stores, according to Dillon’s biography. The company also operates 37 U.S. food processing plants.

In addition to his roles with KU Endowment and the KU Hospital board, Dillon has served on several business and charity boards in this area and in Cincinnati.

Another business CEO and KU alumnus headed KU’s last chancellor search committee, which led to the hiring of Gray-Little in 2009.

That search committee chairman was Drue Jennings, former chairman and CEO of the Kansas City Power and Light Company. Jennings served in varying roles with the KU Endowment, Medical Center, Edwards Campus and Athletics Department — including that of interim athletic director in 2003 when he guided searches that ultimately brought Athletic Director Lew Perkins and Men’s Basketball Coach Bill Self to KU.

Dillon, the search committee and R. William Funk and Associates will pursue their charge with little public oversight.

The Board of Regents also chose a closed process for KU’s last chancellor search and this year’s Kansas State University president search, which culminated in the hiring of interim K-State president and retired Gen. Richard Myers on Monday.

In announcing Myers’ hiring on Monday and again during Wednesday’s Board of Regents meeting, Mullin praised the closed process.

“I believe strongly that the pool of candidates we had … was extremely strong because of the closed search,” Mullin said.

The K-State search committee attracted high-quality candidates, he said, several who said they would not have applied had their candidacy not been confidential.