Firefighters: No one injured in New Jersey Street house fire 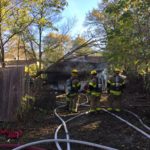 No one was injured Friday morning in a fire that damaged one vacant home on New Jersey Street, firefighters said.

Earlier in the morning, Lawrence police officers reported smoke coming from the back of the home, Temple said. The officers called firefighters to the scene when a fire extinguisher failed to put out the flames.

Firefighters arrived on the scene, closing off the intersection of 13th and New Jersey streets as they brought their hoses to the back of the home to combat the flames.

The fire was extinguished within about 20 minutes and the damage was confined mostly to the rear of the home, Temple said. No one appears to live in the home, and no one was injured in the fire, he said.

The cause of the fire was not immediately clear and the incident will be under investigation, Temple said.

BREAKING – I'm at 13th and New Jersey for a house fire. Lots of smoke, fire crew have the hoses out. pic.twitter.com/Z61lQZtnBq

There's a better picture for you. From the back side of the house. pic.twitter.com/BMIvPCcFHL

Short video for y'all. pic.twitter.com/r7fphV6Dfh

From the front side of the house. Looks like things are calming down. pic.twitter.com/jf5ZH5sVUt