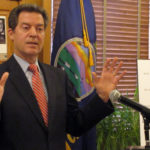 In this file photo from April 2015, Kansas Gov. Sam Brownback answers questions from reporters during a news conference at the Statehouse in Topeka.

TOPEKA ? Kansas Gov. Sam Brownback is criticizing the Obama administration’s directive on the treatment of transgender students at public schools as “an unprecedented example of executive over-reach.”

The U.S. departments of justice and education said last week transgender students must be allowed to use bathrooms and locker rooms consistent with their gender identity because federal law prohibits discrimination against those students. The administration says schools that refuse to comply could face federal lawsuits and lose federal aid.

Brownback said in a statement Wednesday that states, not the federal government, have primary responsibility for education policy. He says local schools, communities and parents are best equipped to respond to situations involving gender identity.

The governor’s spokeswoman says he doesn’t plan any further response to the federal guidance beyond the statement.

? Federal government gives directive to US schools on transgender bathroom access (May 13)