Your Turn: U.S. candidates must face the facts 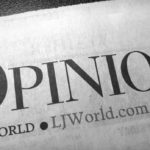 Cal Thomas and others think there “must be a better way to nominate and elect a president” (“Voters need better choices,” Journal-World, April 5), one that attracts smarter, more capable people. Thomas blames a “ravenous media” that scavenge the candidate’s life for the “smallest misdeed.” His solution? A plan devised by academia or think tanks that would recruit better candidates, shorten campaigns, focus on substance and cost less money.

But would the candidates listen? The GOP hopefuls don’t listen now to the facts provided by university researchers and science think tanks as fundamental to smart, responsible public policy.

Fact: Unprecedented global warming, caused by human industry during the past 150 years, threatens our cities, coastlines, croplands and health.

Fact: We now live in the Anthropocene, “the human epoch.” For the first time in the Earth’s 4.5 billion-year history, humans, not nature, are the most powerful force transforming the land, oceans, atmosphere and life of the planet.

Fact: Left unchecked, we will face increasing droughts, floods and virulent diseases; destruction of our forests by resistant pests; threats to agribusiness and food security; and upheaval of entire communities and economies. The Defense Department listens. It ranks these as top threats to national security because they are the fuel for civil wars, ethnic strife and millions of refugees.

Fact: Biology, physics, chemistry, geology, anthropology, history and other disciplines tell us how all this came to be and how to fix it.

Instead, the GOP candidates prefer to hear no science, see no science, and speak no science, no matter the consequences for the nation they aspire to lead. Whether they’re pandering to a constituency or practicing willful disbelief, they are unfit to lead the world’s most technological country through the most science-driven era in human history. Thomas himself leads this anti-science parade in his columns. He and the candidates regularly deny climate change and any non-scriptural version of the geology and biology of the planet. As Louis Black quipped, we don’t need a president who thinks The Flintstones television series was a documentary.

University researchers and medical think tanks repeatedly report how pollution ravages human health. Yet the GOP candidates don’t listen. Instead, like wind-up clones, they vow every four years to eliminate the Environmental Protection Agency, the very agency mandated to ensure that we are breathing clean air, drinking clean water and living on clean earth. The EPA is “anti business!” they cry. You bet — anti those businesses that treat our neighborhoods as toxic waste dumps and endanger your health and mine.

Air pollution damages lungs and shortens lives, from cancer-causing particulates, to asthma in young children, to life-threatening premature births. Were it not for the EPA, the nation’s waters would be chemical sewers from fertilizer run-off and the dumping of industrial waste. As it is, pollutants have already poisoned the groundwater reservoirs for millions of Americans, caused massive dead zones in Chesapeake Bay and ruined the water quality in 100,000 miles of rivers and streams and millions of square miles of lakes, reservoirs, ponds, bays and estuaries. Perhaps the EPA-bashing would stop if the candidates had to drink these waters, or bathe in them.

Then there’s guns. Since 2001, about 440,000 Americans have died from gun violence, roughly 30,000 a year. During the same period, about 3,400 were victims of terrorists here and abroad. The response from GOP candidates to acts of terrorism is overwhelming, e.g., Cruz: “We will carpet bomb them (terrorists) into oblivion.” But after mass shootings of students in schools, and people in theaters and shopping malls, all we get are do-nothing condolences. Countless studies by university law schools and think tanks detail how we can sensibly honor the Second Amendment’s right to bear arms, yet stem the daily carnage from firearms.

Theoretically, nonstop politicking should provide better candidates, because, given enough time, a democracy allows fools to expose themselves. It’s our fault if we vote for them.

— Leonard Krishtalka is director of the Biodiversity Institute and a professor of ecology and evolutionary biology at Kansas University.