Lawrence High School junior Luther Fuller sets the metal Brailler on the table. Unlike the slim, electric Braille display and notetaker nearby, the Brailler does not have audio capability or shifting pins to display text. It cannot connect wirelessly to a computer. Instead, Fuller cranks a piece of thick paper through the Brailler and keys in a message of raised dots.

He doesn’t use the Brailler often; the paper still has a message from the last time he demonstrated it. But such a Brailler is what he’ll use on Saturday as part of the national Braille Challenge, in which participants will use nothing but their Braille reading and writing skills — no help from text-to-speech technology or the internet — as they compete in events such as comprehension, spelling and proofreading. 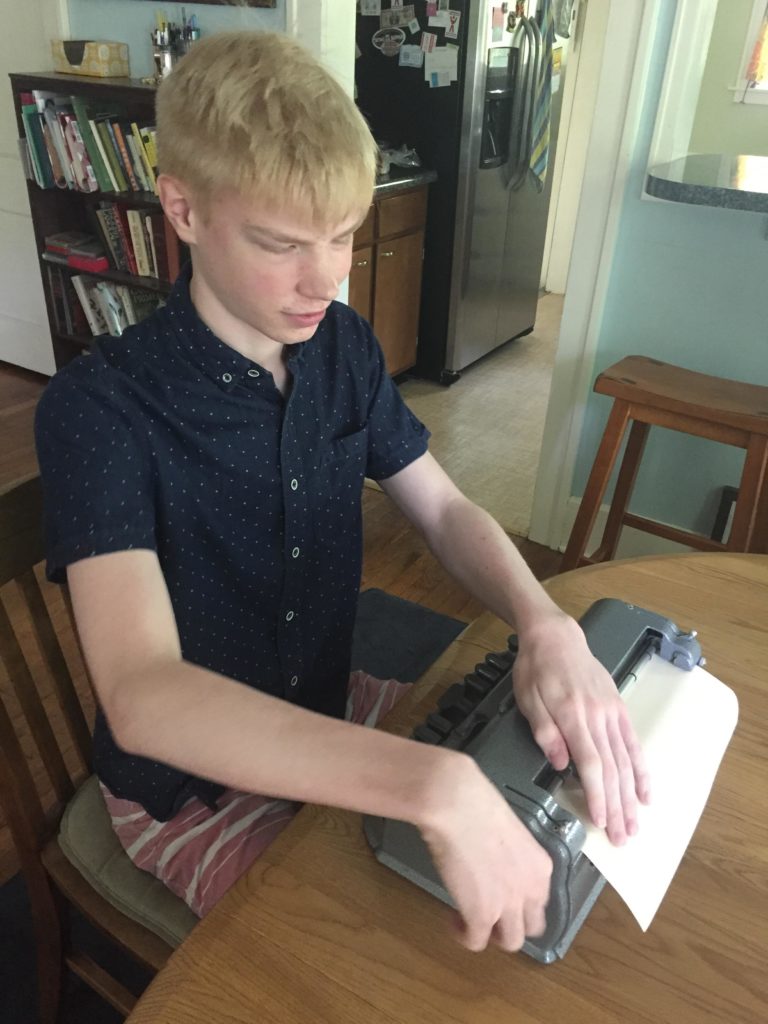 Luther Fuller, a soon-to-be junior at Lawrence High School, reads a message he typed in braille. Fuller will compete in the National Braille Challenge in Los Angeles on June 18, 2016.

Fuller is among 50 students who qualified to participate in the 16th annual Braille Challenge, which will take place Saturday in Los Angeles. Though Fuller said he thinks new technology such as text-to-speech is a useful tool, being able to read Braille remains as important for blind students as being able to read print is for sighted students.

“To be able to read what is actually there instead of having it read to you is valuable,” Fuller said, noting it is particularly important for technical subjects such as math and science. “Imagine a complex equation being read to you by a computer. You have to be able to see where everything is.”

Those skills have been something Fuller has been sharpening for some time. Fuller, who was blinded at a young age during surgery for an eye disease, began learning Braille at the Kansas State School for the Blind in Kansas City, Kan., when he was in preschool. He attended the school through second grade before he began at Lawrence public schools.

As part of the national contest, students will take part in an all-day academic competition spanning five categories: reading comprehension, spelling, proofreading, chart and graph reading, and speed and accuracy. Fuller has competed in the regional competition every year since 2010, and this is the fifth time he has qualified for nationals. The highest he has ever placed is second, which he did in 2010.

For Fuller, the most difficult category is speed and accuracy, which involves transcribing two passages. He said the regional competition in February was actually the first time he’d finished transcribing both passages before time elapsed.

“The one that I practice for mainly is speed and accuracy because that’s most difficult for me, and I think most people would agree there,” Fuller said. “There’s just a lot of pressure because you’re trying to get all this stuff written and you’re trying to be accurate at the same time.”

Brendy Latare, Fuller’s mother, is accompanying him to the competition. Latare said one of the things she likes about the Braille Challenge is that it’s focused on literacy.

“It’s just more and more exposure to people and awareness that Braille reading is reading; it’s literacy,” Latare said. “It’s the same thing as print reading, really, and it leads to the same great results.”

Those who do well in the national competition also have the chance to win a new electronic Braille display — Fuller’s is on loan to him from the school district — as well as cash awards. Although Fuller said he’d be happy to place in nationals this year, he recognizes that the competition will be tough.

“We’ll just have to see,” Fuller said. “I hope to do well and place there, because it’s quite an achievement, and there’s a lot of rewards.”