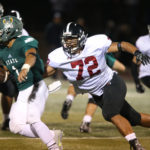 Lawrence High defensive lineman Amani Bledsoe (72) comes around to wrap up Free State quarterback Bryce Torneden (1) for a sack during the first half on Friday, Sept. 17, 2015 at Free State High School.

After listing Kansas among his two finalists, Lawrence High football standout Amani Bledsoe has decided to play college football at the University of Oklahoma.

Bledsoe, a four-star recruit, announced his commitment on Thursday afternoon. The 6-foot-5, 272-pound defensive end is the top recruit in Kansas and ranked No. 122 in the nation in the Class of 2016 by Rivals.com.

The Sooners were long considered a frontrunner for Bledsoe. He took an official visit to Norman on Oct. 23-24, traveling to Oklahoma with his mother, brother and grandfather.

“After talking with my family and coaches, I’m proud to announce that I will be pursuing my education and football dreams playing college football at the University of Oklahoma!!!” Bledsoe wrote on his Twitter account.

Kansas made a strong push in the past few months, but there is no prize for runner-up. Bledsoe took his fifth and final official visit to Kansas on Dec. 11-12 and he attended a KU basketball game against TCU on Saturday. He also considered Oregon, North Carolina State and Baylor before naming Oklahoma and KU as his top choices earlier in the month.

Bledsoe earned first-team all-state honors for his play last season and he was named the Sunflower League’s Andre Maloney Most Valuable Player. Despite facing constant double-teams from opposing offenses, he finished the year with 89 tackles and 11 sacks, leading the Lions to a 10-1 record and their first league title since 1993.

He also earned the Buck Buchanan Award, given to the most outstanding lineman/linebacker from big-class schools in the Kansas City metro area.