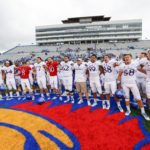 Head coach David Beaty and the Kansas University football team close their spring game by singing the KU Alma Mater. Beaty inherits a squad woefully short of numbers and one that is looking for walk-ons to fill the gaps.

The second session of Kansas University’s spring football practices under head coach David Beaty is scheduled to begin in mid-March, with the annual spring game slated for a 1 p.m. kickoff on April 9.

KU football officials released those details and others on Wednesday afternoon as the program begins preparations for the second season of the Beaty era.

As usual, KU’s spring football will feature 15 practices — 14 plus the spring game — spread out over a five-week period. A handful of mid-year transfers who signed with Kansas back in December will be eligible to practice with the team throughout the spring.

This year’s spring game is slated a little more than two weeks earlier than last year’s, which took place on April 25.

Behind-the-scenes, off-the-field efforts, of course, have been ongoing since KU lost its final game of a winless 2015 season back in November. Beaty and his staff — which has changed slightly with the departure of linebackers coach Kevin Kane and the addition of receivers coach Jason Phillips — have been hard at it on the recruiting trail, trying to fill up the 2016 class, which will be revealed on national signing day Feb. 3.

Following that, Beaty and his staff will hit the road for the second consecutive year of “Football in February,” an effort by the KU coaches to get out and meet as many fans across the state as possible.

Exact times and dates for the Football in February event will be announced soon, but expect it to be five or six dates in five or six different cities.

Other dates of note that were announced Wednesday include: Kansas Football Coaches Clinic (Feb. 19-20) and the fourth-annual Train Like a Jayhawk Kid’s Clinic (April 9).