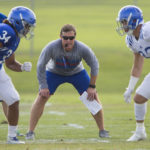 Kansas linebackers coach Kevin Kane gets down as he watches linebackers Aaron Plump (34) and Schyler Miles square off to hit on Monday, Aug. 17, 2015 at the fields south of Anschutz Pavilion.

Kansas University football coach David Beaty confirmed to the Journal-World on Wednesday afternoon that linebackers coach Kevin Kane was leaving the program to return to Northern Illinois, where he will serve as NIU’s new defensive coordinator.

NIU later announced the hire in a news release.

“It’s great to have Kevin, his wife Theresa and their family back as part of our Huskie family,” NIU coach Rod Carey said in the release. “With his familiarity with our program and players after just one season away, it was a no-brainer to bring him back. I’m excited for this opportunity for him and have no doubt he’s going to be a top-notch defensive coordinator.”

Kane, who played at Kansas from 2002-05 and returned to coach his alma mater during the 2015 season after a four-year stint as an assistant at Northern Illinois, leaves the Jayhawks looking for someone who can recruit the Kansas City area.

A native of Kansas City, Missouri, Kane also coached as a graduate assistant at KU from 2006-07 before spending three years on the staff at Wisconsin.

A source close to the KU football program said losing Kane after just one season was disappointing but added that “if schools aren’t going after your guys, you’ve got the wrong ones.”

In addition, the general sentiment within the program and among those who know Kane best view the move as a bummer for KU football but a great thing for Kane.

“I’m excited to be back in DeKalb with the team I know so well that has had so much success,” said the 31-year-old Kane in the release. “(Former NIU DC) Coach (Jay) Niemann has done a great job over the past five years at NIU. I studied under him, learned under him and we want to continue the success that NIU has had. I can’t wait to get my foot in the door and be back in DeKalb calling the defense. One of the things I love about coming back is I know all the players there already. I get to coach the linebackers I helped bring to the school, with a defensive line and defensive backs, as well as a coaching staff, that I know. Being away, I’ve learned a lot and hope to incorporate some of the things I’ve learned and just continue the winning tradition that’s been built.”

Kane’s biggest contribution during his one season as a full-time assistant in Lawrence had to be the role he played in the development of sophomore Joe Dineen, who entered 2015 never having played linebacker yet wound up finishing second on the team with 86 tackles and third with three sacks. Early in the season, it was clear that Dineen was adjusting to a new position and playing a step slow during certain portions of each game. By the end of the year, however, the Free State High grad began playing much faster and using his natural instincts to become a play-making force for the Kansas defense.

There has been no word on what the Jayhawks will do to replace Kane and no time line for a hire has been given.