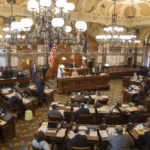 The Kansas Senate sits in session, Tuesday, Feb. 23, 2016, at the Statehouse in Topeka.

Lawrence City Commissioners heard details Tuesday about a Kansas Senate bill aimed at preventing Lawrence from creating ordinances that would require a share of new housing construction to be set aside as affordable.

Lawrence resident Melinda Henderson brought up the legislation, Senate Bill 366, during a public comment period at Tuesday’s City Commission meeting, hours after it passed the Kansas Senate on a 34-6 vote. According to correspondence Henderson provided to commissioners, Sen. Marci Francisco, D-Lawrence, testified against the measure, saying the language was “so broad that it may eliminate other opportunities for communities to address issues of affordable housing.”

Henderson asked commissioners why the city hadn’t provided testimony in opposition to the bill.

“I will take full responsibility for not putting anything together on this item,” Interim City Manager Diane Stoddard said. “We had no indication that was aimed at the city of Lawrence.”

The Topeka Capital-Journal reported that Sen. Rob Olson, R-Olathe, said the Kansas Association of Realtors asked that the bill be passed because of discussion in Lawrence about zoning changes that would enable a portion of housing units in new subdivisions to be sold to customers at a reduced price. That type of action is referred to by some as “inclusionary zoning.”

Inclusionary zoning has not been officially proposed in Lawrence, Stoddard confirmed.

In talks last year about affordable housing practices, inclusionary zoning was mentioned. Justice Matters, a consortium of 21 local religious organizations working to address affordable housing, said at the time that the practice may be a topic of future discussion, but that they would rather look for options that would garner support from the housing industry.

Senate Bill 366 would prohibit any local governments from enacting rules to control the rental or purchase price of privately owned residential or commercial property.

At the Senate Committee on Commerce earlier this month, the Kansas Association of Realtors and the Kansas Building Industry Association provided testimony in support of the measure. The League of Kansas Municipalities testified against it.

A written testimony from the League of Kansas Municipalities states the legislation would prevent the ability of Kansas cities to exercise home rule authority.

In an email to state senators from the Kansas Association of Realtors, that group said the bill would “protect the right” of property owners to rent or sell “on the free market without unnecessary government inference.”

The bill will next go to the House Standing Committee on Commerce, Labor and Economic Development.

Mayor Mike Amyx said Tuesday that since the legislation is “directed solely at the city” the commissioners “have an obligation to testify.” The City Commission directed staff to prepare testimony and reach out to Lawrence’s legislative delegation.

“My biggest concern with it is it has major home rule implications for us and all cities across the state for implementing any kind of tools they believe may be helpful to solve local issues,” Stoddard said.

• Unanimously approved the pavement maintenance program for 2016, through which the city will spend $2.8 million on 18 street improvements. The commission decided against using $40,000 toward the program from a fund set aside in the 2016 budget for pedestrian- and bicycle-related improvements. Chris Tilden, with the Lawrence-Douglas County Health Department and Marilyn Hull, on the city’s Bike and Pedestrian Issues Task Force, argued that fund should be reserved for projects that improve the ability to walk and bike, and not streets.