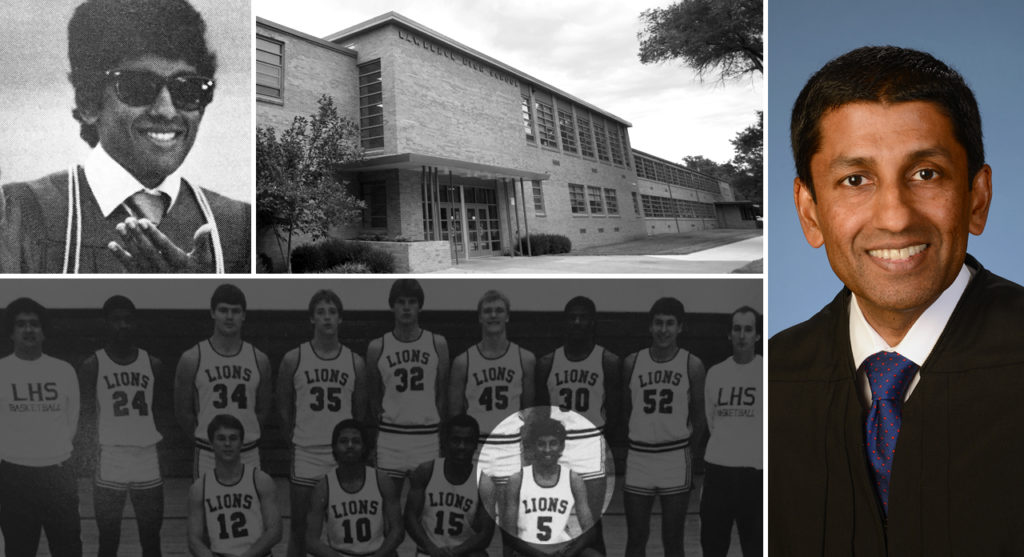 Former Lawrence High student Sri Srinivasan is thought to be one of the top candidates to fill a vacant U.S. Supreme Court seat. Srinivasan is pictured, at right, as a judge on the U.S. Court of Appeals District of Columbia Circuit. Yearbook photos from his senior year at LHS show him delivering a graduation rap, top left, and posing as a member of the Lions basketball team, bottom.

In the Lawrence High School yearbook from Sri Srinivasan’s graduating year, Srinivasan is not confined to his senior picture.

There are pictures of him playing basketball and performing with the band. In the last few pages, there’s a picture of him in sunglasses, dancing while giving a graduation speech in the form of a rap. This, people say, is Srinivasan: much more than his considerable academic accolades might suggest.

“It wasn’t as though he didn’t have a sense of humor,” said Kenneth Highfill, former LHS science teacher. Srinivasan and a classmate convinced school administrators to let them do the rap as their graduation speech, Highfill said. “That shows you a little bit about his inner personality.”

The graduation rap, delivered in rhyming couplets, catalogued experiences — jokes throughout — of the class of 1985, still ending with the typical nod toward the future: “To those of you who want more knowledge, we wish you good luck as you enter college. Whatever you do, for whatever you strive, don’t ever forget, we’re the class of ’85.”

Those could be the words of the next U.S. Supreme Court Justice.

Following Justice Antonin Scalia’s death last week, Srinivasan is thought to be one of the top candidates to fill the vacant U.S. Supreme Court seat, according to multiple national news reports.

Srinivasan currently serves on the U.S. Court of Appeals for the District of Columbia Circuit, which generally is considered to be the second most influential court in the United States.

News of Srinivasan’s potential nomination to the Supreme Court does not surprise those who know him. 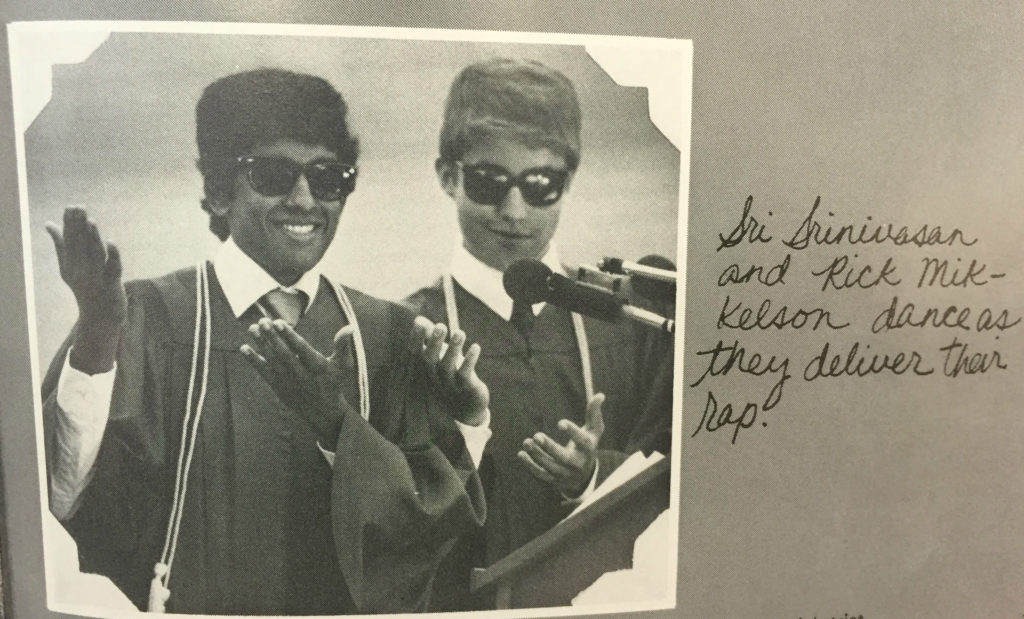 “Whatever Sri decided to do, he was going to be fantastic at,” said LHS teacher Jo Huntsinger, who grew up across the street from the Srinivasan family in a neighborhood near the Kansas University campus. “Whether it was music or medicine or law, he was going to be great at whatever he chose to do, just like the rest of his family.”

Srinivasan’s father, T.P. Srinivasan, was a math professor and a leader in Kansas University’s governance groups. His sister, Srinija Srinivasan, is a former executive at Yahoo, where she was one of the first people hired by the company in the 1990s.

When asked what they remember about Srinivasan — who received three degrees in business and law from Stanford University — teachers and classmates are quick to mention his intelligence, but what is emphasized more is that he was positive and personable.

“When you walk into a classroom, not all of the students want to be there, but you usually have those key students that are positive leaders,” Highfill said. “They really help unify a classroom in a positive way, and I have a memory of him like that.”

That leadership followed Srinivasan to the basketball court as well. Though Srinivasan did not play varsity until his senior year (meaning he only practiced alongside basketball great Danny Manning), he still played a key role on the team, said former LHS head coach Ted Juneau.

“As a basketball player he was not physically gifted — he was not very strong or tall — but he knew the game and he was a good leader, and kids looked up to him,” Juneau said. 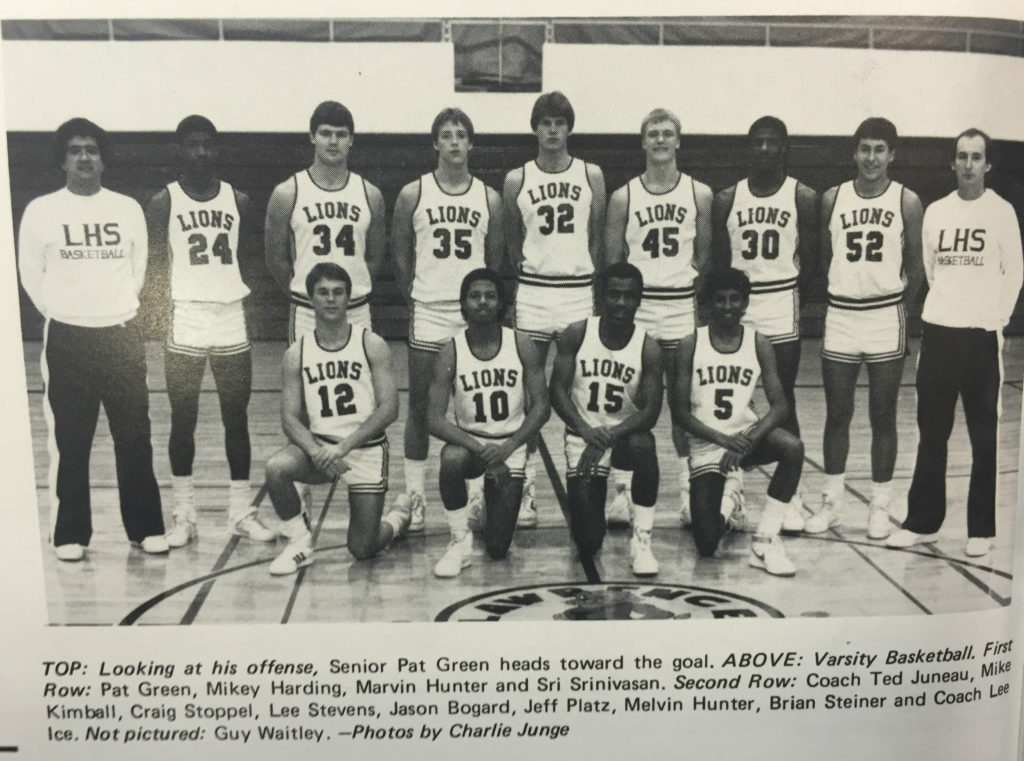 In addition to basketball, Srinivasan also played percussion in the LHS band. That was part of the reason he and his classmate, Eric “Rick” Mikkelson, decided to use that musical ability to break with the common commencement speech (which they did somewhat unapologetically — one of the first verses is: “We’re breaking tradition, the yearly repetition. If you’ve got a problem, sign a petition.”) Mikkelson said they decided to incorporate music into the speech because of Srinivasan.

“He was quite talented,” Mikkelson said. “He was in charge of keeping the beat for our graduation rap.”

Mikkelson went to West Junior High, LHS and Stanford with Srinivasan and is currently an attorney in Kansas City, Mo. Mikkelson, who remains friends with Srinivasan, said that what stands out about him is his particular combination of traits.

“Starting in seventh grade we went to school together, through our college careers,” he said. “He is and was a unique combination of brilliance and humility, which is very rare to get both of those in one person.”

Before his current position, Srinivasan was principal deputy solicitor general in the Justice Department, where he argued cases on behalf of the government in the U.S. Supreme Court. In 2013, Srinivasan was inducted into the LHS Hall of Honor. Highfill, who said he remembered Srinivasan as always being courteous to others while a student at LHS, said that he exhibited those same traits following the 2013 Hall of Honor ceremony. Srinivasan talked with everyone and posed for pictures with the statue of the Chesty Lion outside of the school, he said.

“There at that ceremony, it was a combination of dignity and civility and approachableness that impressed me,” Highfill said. 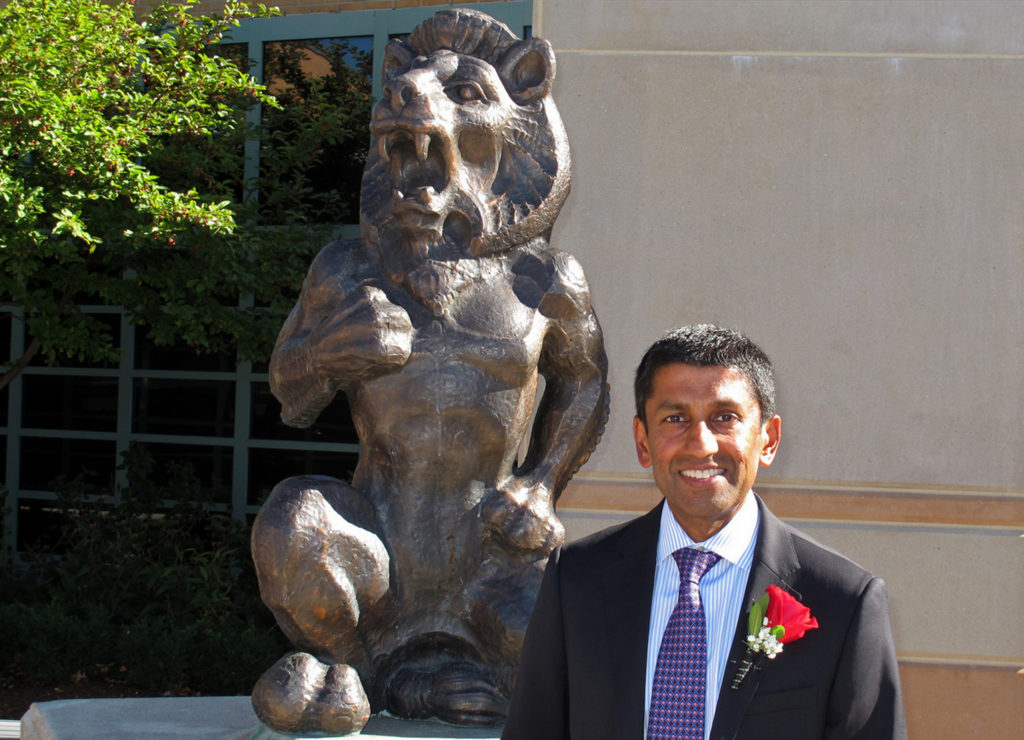 Sri Srinivasan poses with the statue of the Chesty Lion outside of Lawrence High School following his induction into the LHS Hall of Honor in 2013.

Several news outlets have said that Srinivasan, who is often described as politically moderate, stands a good chance against some Republican U.S. senators who may be reluctant to accept a nomination by President Barack Obama in the last year of his term. Srinivasan was nominated by Obama to the appeals court in 2012, and was confirmed by the U.S. Senate in a unanimous vote.

Ray Wilbur is another teacher who remembers Srinivasan as a positive kid, and said “he always seemed to have a smile on his face.” Wilbur, who taught math, also keenly remembers another LHS graduate whom some have mentioned as a potential nominee, Kannon Shanmugam.

“Both of them were excellent students, and I truly hope one of them is selected,” Wilbur said.

Huntsinger, who has taught at LHS for 30 years, said that both Srinivasan and Shanmugam are a point of pride for the school and the district.

“I just couldn’t be more proud of Lawrence kids,” Huntsinger said. “…I think that speaks a lot about the schools we have in Lawrence.”