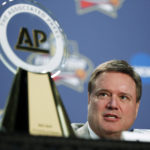 Kansas coach Bill Self answers a question near his Associated Press Coach of the Year trophy at a news conference at the NCAA Final Four college basketball tournament Thursday, March 31, 2016, in Houston. (AP Photo/David J. Phillip)

The active streak of 12 consecutive Big 12 titles tops all other evidence of the consistent excellence of the Kansas basketball program.

But everybody knows about that remarkable achievement. I searched for another means of demonstrating how well Kansas has managed to stay so consistent in this era of high roster turnover created by one-and-done players and outrageous transfer rates from impatient players (and/or fathers).

Lacking the patience to find one, I invented a mathematical formula to see if I could confirm my suspicion that KU has had the most consistent program in the nation the past 10 completed college basketball seasons.

NCAA tournament seedings supply the fairest means of comparing teams from different regions of the country. So I awarded 16 points for 1 seed, 15 for a 2 seed, etc., all the way to one point for 16 seed and no points for not making the field.

According to my homemade research and math, these have been the 10 most consistent college basketball programs over the past 10 seasons, not including the current one:

Landing just the right amount of one-and-done players has helped, but Kansas coach Bill Self said he doesn’t try to limit the amount of talent he and his staff recruit.

“I think it’s just the way it works out,” Self said. “If we could get three top-five picks this spring, we will. If we can’t get them, we won’t, and we’ll be happy with what we get. But the reality of it is, I think you coach whatever you have.”

Frank Mason initially committed to Towson, Devonté Graham to Appalachian State. So strong talent evaluation clearly plays a part in KU’s consistency. But nothing plays a greater part than Self never lowering his standards for unselfish play and effort and pushing the right mental buttons to coax his players to meet them.

“In a perfect world, in my perfect world, I think having your best player, your most talented prospect or prospects will be your youngest guys,” Self said. “I don’t think that’s bad. And then have a foundation that’s made up of your veterans that are basically the face of your program that can carry you.”

Josh Jackson is the team’s top talent and an argument could be made that fellow freshman Udoka Azubuike is the next-best long-term prospect.

“Josh is probably the best prospect we have, no question,” Self said. “But the flip side of that, you could make a case for one reason why Josh is performing well is because he’s got some veterans around him.”

And unlike in what is typical for most freshmen, there is no arguing that one reason the veterans are performing so well is that Jackson plays with non-stop hustle. And when the most talented player on a team does that, there is no excuse for anybody on the roster not doing the same.