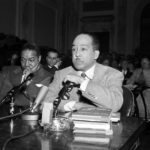 The Lawrence Arts Center has received a $50,000 grant from the National Endowment for the Humanities to support preliminary planning, research and documentation for the production of a two-part documentary film on the life of Langston Hughes.

In collaboration with the Lawrence Arts Center, the Dream Documentary Collective — a roster of mostly Kansas University professors spanning several departments — proposes “to explore the multiplicity of ways in which Hughes constructed his identity, participated in the international arts scene, and engaged with the American dream,” according to the Arts Center.

The NEH grant will allow the collective to bring nine leading Hughes scholars to Lawrence during June’s Free State Festival. As part of the festival’s programming, the Hughes experts will “gather to discuss the preliminary treatment for the film, to develop an outline for the full screenplay of the film, and to conduct a series of public panel discussions” about the writer’s life, according to the Arts Center.