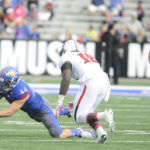 Kansas' Michael Zunica dives on a fumbled snap as he is followed by Texas Tech linebacker Micah Awe (18) during the first quarter on Saturday, Oct. 17, 2015 at Memorial Stadium.

Michael Zunica’s introductory words to a man from whom he hoped to earn a job would not have been very well received had he spoken them to a human resources director or police officer, in a classroom or a courtroom.

Not to worry. A football coach, Kansas University offensive coordinator Rob Likens, was on the receiving end, so the music could not have been sweeter to his ears.

“He was pretty excited about it,” Zunica said, remembering the conversation that took place during summer camp. “He said that he was going to give me a shot. Once I told him I would like to maybe get in on the goal line and just go smack some linebackers for him and I told him I like to hit people, I think he was pretty ecstatic, but it’s just what I like to do. He was pumped up. And I was pumped up too because that’s the position I’ve been wanting to play for quite a while.”

It’s the position he most enjoyed playing for St. Rita High in Palos Park, Illinois, near Chicago. From there he redshirted a year at Columbia and transferred to KU as a walk-on fullback and sat out a year. He quickly switched to linebacker at KU and played mostly on special teams last season.

He explained what it is he loves about playing fullback, a different position than it was decades ago, when typical backfields had an inside runner at fullback and a speedier one at halfback. Now it’s almost exclusively a blocking job.

“I just love hitting people,” I love just trying to clear up some running lanes, trying to clear out some defensive ends, move some linebackers around, make life easier for De’Andre (Mann) and Taylor (Cox) and Ke’aun (Kinner).”

Zunica also blocks for quarterback Ryan Willis. Asked if he would rather get smacked in the face really hard or have that happen to Willis, Zunica’s answer was predictable.

“Me, all day,” he said. “That’s my job. I’m protecting Ryan. Whatever I can do to protect my guys from getting hit is what I’ll do. I love blocking. It’s what I did in high school and it seems to come naturally to me, to try to hit people and move some people around.”

Did he mention he likes hitting people?

“Man, he’ll strike you,” first-year KU head coach David Beaty said of Zunica. “That little ole dude will put his face on you, and you know, that’s most of it. If they won’t bite you when they’re young, they ain’t gonna bite you when they’re old, and when you see him do it the first time, you know whether or not he’ll do it. And he’ll put his face on you; he’s aggressive.”

Likens appreciates the attitude that Zunica, a 5-foot-11, 221-pound junior, brings to the job.

“We need a guy who will just run and hit and not bring his feet together and just run through people, and he has no regard for his body,” Likens said. “He’s a tough guy and a lot of guys rally around him. And he can catch out of the backfield. He was open and we didn’t throw it to him, we probably should have, the last game. So he’s not a meathead who’s doing nothing but hitting people.”

In many ways, Zunica typifies a 2015 Kansas football player. The unselfish spirit is willing, the effort is maximized, but his measurable gifts don’t match those of the guys against whom he plays.

One of the defensive ends Zunica will try to throw around Saturday at Oklahoma State is All-American candidate Emmanuel Ogbah, all 6-4, 275 speedy pounds of him.

That’s all right. Zunica doesn’t seek easy jobs. He embraces tough challenges and seeks out grunt work. That attitude will serve him well when he joins the working world after he graduates and uses up his football eligibility, provided he doesn’t open his job interview with, “Hi, I’m Michael Zunica and I love to hit people.”