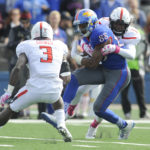 Kansas wide receiver Jeremiah Booker (88) is wrapped up by Texas Tech defensive back Nigel Bethel (1) and defensive back J.J. Gaines (3) during the second quarter on Saturday, Oct. 17, 2015 at Memorial Stadium.

Kansas University’s 30-20 football loss to visiting Texas Tech on Saturday might go down as the day a bunch of young Jayhawks grew up.

Led by true freshman quarterback Ryan Willis, who made his second consecutive start in place of the injured Montell Cozart, the Jayhawks rallied from a 20-0 halftime deficit to pull within three points (23-20) and had possession with five minutes to play in the fourth quarter.

A series of late mistakes, most of which could be chalked up to inexperience, cost the Jayhawks (0-6 overall, 0-3 Big 12) the chance to complete the comeback. But the continued strong play of some of the youngest guys on the roster had some of the Kansas veterans believing this was a team headed in the right direction.

A few of those plays came as a bit of a surprise, as the Jayhawks entered Saturday facing serious depth concerns along the defensive line but wound up getting the best performance of the season from the front four.

“There’s some guys in there that hadn’t played really hardly at all, and I thought they created some disruption,” KU coach David Beaty said. “When you do that, you give yourself a chance. We had seven hurries, five sacks, nine TFLs (tackles for loss). That hadn’t been around.”

The Jayhawks on Sunday afternoon opened as a 35-point underdog for their next matchup, 2:30 p.m. Saturday at Oklahoma State.

It marks the third week in a row KU is a four-touchdown underdog or higher. Baylor finished the week favored by 46 and Texas Tech by 32.5.

The Cowboys (6-0, 3-0) were off last week and, thus, had two weeks to prepare for their showdown with the Jayhawks. It marks the second time this season a KU opponent had its bye prior to squaring off against Kansas.