Column: A look at KU football at the half 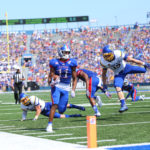 Kansas wide receiver Tre' Parmalee (11) eyes the end zone as he heads in for a touchdown during the second quarter on Saturday, Sept. 5, 2015 at Memorial Stadium.

David Beaty, Kansas University’s fifth head coach in seven seasons (including interim Clint Bowen), is halfway through his first season, which makes for a logical time to look at how things have gone so far for the Jayhawks (0-6).

Offensive MVP: Tre’ Parmalee missed a game because of a concussion, but still leads the team with 20 receptions, two TD catches and a 16.3-yard average per catch. He also scored a rushing touchdown on a 19-yard reverse. A no-nonsense senior, Parmalee has set a nice example for young receivers for how to practice, prepare for games and stay reliable in carrying out assignments.

Defensive MVP: Playing through pain weekly, junior linebacker Marcquis Roberts (31 tackles, one sack, 83-yard interception return for a touchdown, fumble recovery) gets the edge over junior safety Fish Smithson, who leads the squad in tackles (55) and pass breakups (three), and Ben Goodman, the active senior defensive end who leads the Jayhawks with 7.5 tackles for loss, 4.5 sacks and four quarterback hurries.

Most promising offensive true freshman: Ryan Willis has made two starts at quarterback, and he already looks to be KU’s best quarterback since Todd Reesing. He has a cannon for an arm and delivers an accurate, catchable ball on short, intermediate and long routes. He also has nice instincts side-stepping pressure and scrambling. Everybody plays better when a quarterback is one who plays aggressively, plays to win, not to avoid losing, tries to make good plays instead of trying to avoid bad ones. Jeremiah Booker, who missed the first four games because of a broken collarbone, also has been impressive. He has 10 receptions for 104 yards in two games.

Most promising defensive true freshman: When defensive end Dorance Armstrong, a 6-foot-4, 225-pound native of Houston, arrived, the Kansas coaching staff had smiles wider than Armstrong’s wingspan, and it’s easy to see why. He closes so quickly on quarterbacks and has a good motor that will serve him well as he adds pounds throughout his career. Cornerback Tyrone Miller has shown a knack for making plays and is a hard-hitter. If Kansas has the depth at cornerback next season, Miller will move to his natural position of safety and has the potential to develop into an all-conference player, as does Armstrong.

Beaty bright spots: He runs organized, up-tempo practices that include instruction from assistants after every play, with every misstep instantly corrected. The corrections are passionate, but never degrading, which not only helps player development, but recruiting as well. The productive practices have led to significant in-season improvements from several first-year players.

The coaching staff brings the same level of energy to practice daily, never showing to the players the inevitable frustrations of a winless season.

Also, Beaty’s players don’t pack it in and quit when things aren’t going well in games. KU trailed 31-7 vs. South Dakota State and lost by three points. The Jayhawks were behind 20-0 to Texas Tech at halftime and rallied within three points before losing 30-20.

Beaty also has done a nice job of not pointing a finger of blame at assistant coaches and players. He accepts responsibility in sincere fashion.

Beaty first-year growing pains: In-game decisions regarding whether to go for it, kick or punt on fourth down have been slow in coming and too often require the use of a timeout. Talent-challenged in the areas of kicking, punting and blocking doesn’t help, but in some instances a coach should have his mind made up well ahead of time based on the down, distance and clock.

Also, the two-kicker experiment, which looked as if it were working out in the opening couple of weeks, now looks like most two-kicker rotations in that it has made both kickers worse. In Saturday’s loss to Texas Tech, two players punted, two attempted field goals and two attempted extra points. Finding a reliable placekicker and punter should not be as difficult as Kansas has made it look in recent seasons, and this needs to be solved during the offseason.