Between ice hotels, corporate headquarters housed inside a giant basket and a phone booth placed precariously on the ledge of a three-story fire station, there’s not much Tim Martini hasn’t seen.

Adding to his list, Martini can now cross off experiencing The Sandbar’s nightly Indoor Hurricane tradition.

Martini is the host of the online web series “Exploring the Obscure,” which travels from state to state and country to country documenting oddities, both natural and manmade. 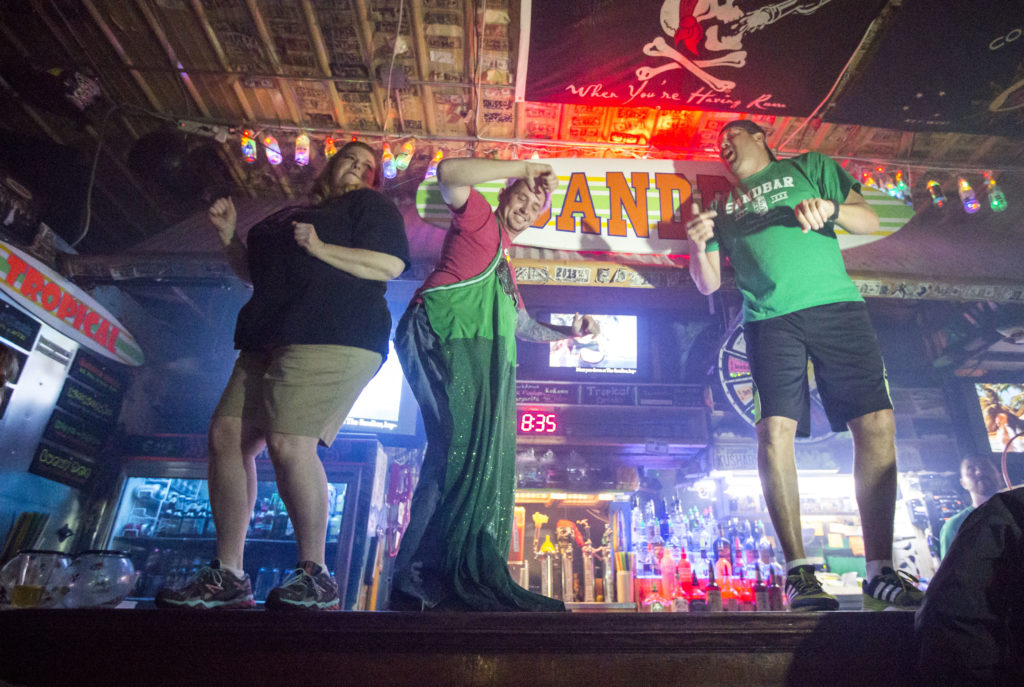 Tim Martini, center, host of the web-based show “Exploring the Obscure,” flaunts a green mermaid dress while dancing on top of the bar inside the Sandbar, 17 E. Eighth St., on Saturday evening as he is filmed for an upcoming episode. Joining Martini on the bar are Coleen Martin, left, and David Johanning, a co-owner of the bar. The Sandbar, known for its unique Indoor Hurricane experience, is only the second bar to be featured on the show.

Currently, Martini said, he is on a 30-day tour between Maine and Colorado, filming along the way. Friday night, he was in Kansas City when a few people asked if he knew of The Sandbar’s hurricane.

A day later, on Saturday — his 32nd birthday, conveniently enough — Martini found himself donning a mermaid apron and a fuzzy tiara, dancing on the bar top, reciting poems and taking a drink or two at downtown Lawrence’s iconic tropical hangout, 17 E. Eighth St.

All the while, Martini’s audience cheered while an indoor fan and fog machine blew a high wind into the establishment and bar napkins were tossed into the vortex.

“I don’t dance,” Martini said, shaking his head and laughing. “I was told it was a poem and an outfit. I wasn’t told anything about dancing.”

Martini said he planned to enjoy more of his birthday evening at the bar before heading out of town Sunday. Among his next stops include Coronado Heights near Lindsborg, Mushroom Rock State Park in Brookville and Lucas’ Garden of Eden.

“You know, it’s a lot of fun. Some people around here know about (the hurricane), but anywhere else they don’t,” he said. “Anywhere else it’s a new thing.”