JaCorey Shepherd picked by Philadelphia in 6th round 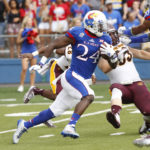 JaCorey Shepherd began his Kansas University football career as a wide receiver, but he’ll enter the NFL as a cornerback after turning heads in the secondary during his final three seasons for KU.

Philadelphia made the 5-foot-11 defensive back the 15th pick in the sixth round of the NFL Draft on Saturday.

ESPN NFL Draft guru Mel Kiper Jr. had Shepherd ranked as the sixth-best prospect available entering the fourth round, and Shephered was No. 1 by the time the fifth round started, but he remained available for the Eagles midway through Round 6.

The Mesquite, Texas, native suffered a left hamstring injury in the offseason, and it left him unable to fully show off his athletic ability at both the NFL Draft Combine and KU’s pro day. Running hurt in late March in front of NFL scouts, Shepherd completed his 40-yard dashes in 4.65 seconds and 4.68 seconds.

That didn’t scare off, the Eagles, though. They selected the 199-pound corner, projected by NFL.com as a fifth round pick.

Shepherd, known for his ball skills and timing in coverage, picked off three passes during his senior season at Kansas, broke up 16 passes, had 30 total tackles and averaged 20.9 yards per kickoff return.

According to NFL.com’s scouting report on Shepherd, he graded out as a backup or player with special teams potential.

A standout at KU, Shepherd got drafted one round after Oakland took his teammate, linebacker Ben Heeney.