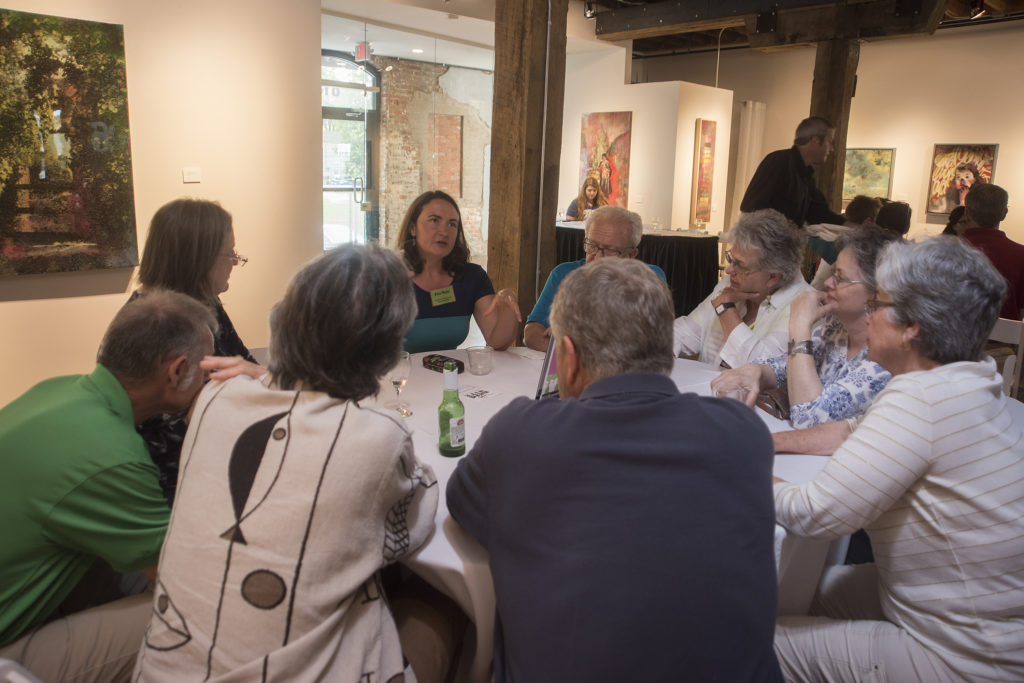 The KU Research: Speed Dating Edition event during the Free State Festival is part of the Spencer's At Large program.

A lot of folks were left scratching their heads after a mysterious structure resembling an old-timey toy store sprung up seemingly overnight in an East Lawrence industrial park just over a week ago.

Those who happened to stumble upon the mid-century-style monolith posted pictures on social media, and soon word began to spread. More and more people stopped by to see it in person, but weren’t sure what to make of the thing.

Eventually, the Spencer Museum of Art joined in on the fun, teasing its Facebook and Twitter followers with mentions of a “NuPenny” toy shop accompanied by images of the East Lawrence structure while holding off on giving away its exact location.

“Has anyone in Lawrence spotted a #NuPenny Toy Store?” read a coy Facebook post from the museum on Tuesday.

Clues were being dropped like breadcrumbs. But no answers were given until Saturday, when Wichita artist Randy Regier set up shop at the “NuPenny Home Office” in front of the Lawrence Arts Center to interact with curious Free State Festival attendees and draw maps leading to his creation.

Titled “NuPenny’s Last Stand,” the quasi-toy shop located at a dead end of 19th Street in Lawrence VenturePark is actually a traveling art installation made by Regier that has popped up in a similarly unexpected manner all over the country, leaving visitors to decipher why and how it got there.

Saturday’s event — and the installation’s unspecified run in Lawrence — is part of the Spencer Museum’s At Large program, which will continue while the museum is closed until renovations wrap up in mid-2016.

Over the next year, Spencer staffers hope to keep the public engaged with a full schedule of offsite programming and events that include artist talks, performances and familiar kid-friendly favorites like Art Cart and Saturday Art Adventures.

Margaret Perkins-McGuinness, the museum’s director of external affairs, has helped to spearhead At Large since the galleries closed in April.

“One of the overarching goals was to maintain the momentum we have with the very diverse audiences that visit the museum on a regular basis, but we also wanted to take this time to reach beyond our already-existing audiences,” she says of the At Large program. “This has presented a really great opportunity to meet new people and engage with them in new places around the community in the long-term hope that when the museum reopens, they’ll be excited to become a part of our close circle of friends.”

To accomplish this, the museum has divided efforts into three teams: programming and partnerships, marketing and outreach, and collections and curatorial projects.

They’re taking a more “unfettered and fancy-free” approach to museum operations, says Perkins-McGuinness, who jokes that the interim period is a time to “loosen our ties and let down our hair” at the Spencer. 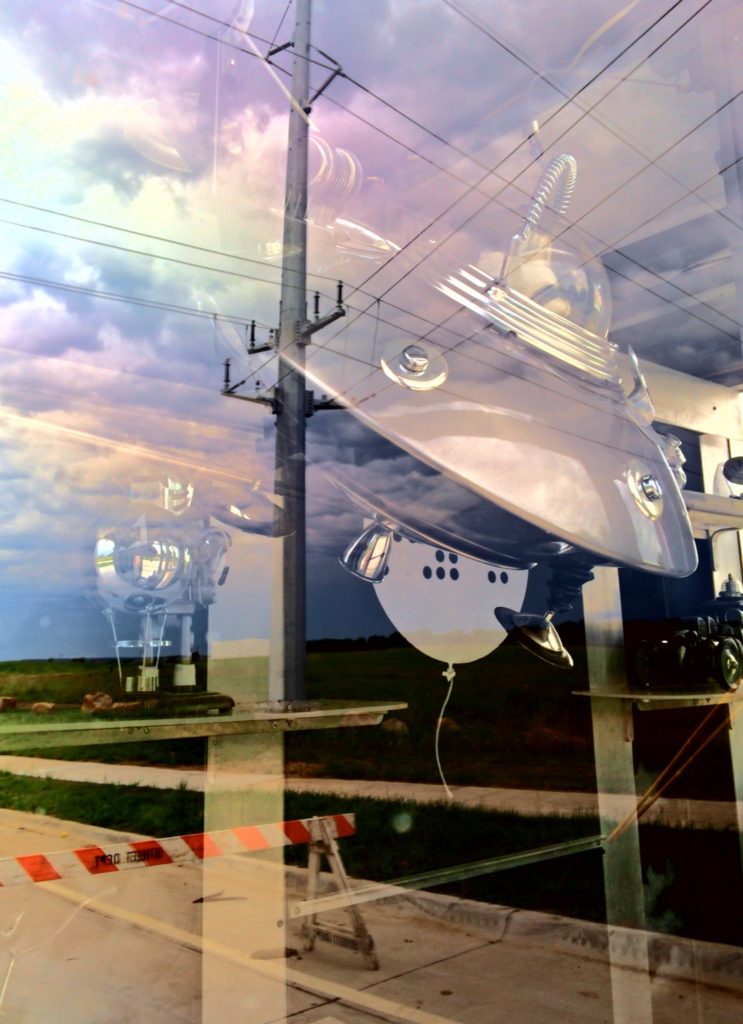 A classic UFO is displayed inside the NuPenny toy store at a dead end in East Lawrence on Tuesday evening.

Even without a facility, Spencer staffers are working to keep the art accessible. In a continuation of its popular Walk-ins Welcome Fridays program — which gave visitors access, by request, to the approximately 20,000 works on paper in Spencer’s print room — the museum will host a similar event at Spooner Hall once a month.

Like Walk-ins Welcome Fridays, the Spooner Hall program will welcome anyone who drops by to interact with the museum’s global and indigenous art collection as well as its curators — a rarity, says Perkins-McGuinness, in that most art museums would require a reservation for such activities.

“This is an opportunity for us to spread our wings and try new things,” she says. “We wanted this to be a time where we could operate in a way that’s somewhat liberated from our more traditional role as an art museum, which carries with it a sense of… well, you know, what an art museum is.”

Spencer staffers took a similar approach in assisting Randy Regier scout a location for his “NuPenny’s Last Stand” installation earlier this month. An industrial park on the outskirts of town may not be the most traditional setting for artwork, but it’s exactly what Regier had in mind when he conceived the idea for “NuPenny” back in the early 2000s.

“I imagined it being in the last place you would think to find it,” says the artist, whose unique point of view landed him a spot in the “State of the Art” exhibition at the Crystal Bridges Museum of American Art — and on “CBS News Sunday Morning” — last fall.

Regier first constructed “NuPenny” in its portable version (the installation started out popping up in unused architectural spaces) about five years ago when he discovered and refurbished an old industrial cabinet.

He makes each piece inside the installation by hand (you’ll see all manner of playthings, including rocket ships, UFOs and toy cars, through the windows of its current incarnation) using repurposed scientific equipment, industrial parts and pieces of antique appliances.

Regier, who worked nearly 20 years in the auto body industry before formally studying art in this 30s, says “NuPenny” is partly inspired by his childhood in rural Oregon.

The family lived in several Midwestern states before relocating to Barcelona for two years, followed by a return to provinciality in Oregon, where Regier’s father took a job as a hired hand on a farm.

Removed from the urban glamor of Barcelona, Regier fantasized about the kind of “big-city toy stores” he didn’t have access to in the countryside. The closest he ever got to the toys of his dreams was flipping through the Sears and JCPenney Christmas catalogs, until one day he and his family were invited to dinner at the home of a local artist.

Has anyone in Lawrence spotted a #NuPenny Toy Store?

The man had a toy train on his fireplace mantle. And it had a young Randy completely transfixed.

“His kids and my sister were watching TV and playing together, but I remember starring at that train all night because my 9-year-old self had decided that if I stared at it long enough and hard enough, he would realize that no one in the world wanted that train more than I did, and he’d give it to me,” Regier says.

But he didn’t, and looking back decades later, Regier says he’s glad. If Regier had gone home with the train that day, he probably would have lost it or destroyed it, or, in the event of completely losing interest in the toy, traded it for something else — either way, he says the incident is what led him on the path to art.

Much like that train on the mantle, “NuPenny’s Last Stand” is meant to invoke longing for the objects displayed behind the glass. The effect is heightened after 8:30 p.m., when the installation lights up from the inside.

But it’s always locked . You can never go inside Regier’s glowing “Twilight Zone” store to play with the toys, no matter how inviting it may look.

“The fact that I was never able to have it is the reason I still care about it and think about it,” Regier says, recalling the train of his boyhood. “I think a lot about that in terms of the acquisition of things — how much we desire them and how much that fades when they’re acquired or conquered.”

It’s the same reason he doesn’t allow folks inside “NuPenny.”

“I could let people go in and walk around and come back out, but my response to them when they ask if they can is, ‘How would it be any different for you?'” he says. “I think they would lose something in that.”