Supreme Court's same-sex marriage ruling not binding in Indian Country, where some tribes recognize gay marriage and others still don't

Some American Indian same-sex couples have been getting married, legally, by their tribal governments for years.

That wasn’t an option for Darla and Mattisa Harrison, of Lawrence, however. And even after Friday’s U.S. Supreme Court ruling it still wouldn’t be, as the decision does not apply to tribal law, experts say.

Prioritizing legal standing over a traditional ceremony, at least initially, the Harrisons married in what they call “the white man way” at the Douglas County Courthouse in March. They believe they’re the first Indian same-sex couple to legally wed here.

Darla (left) and Mattisa Harrison wed March 25, 2015, at the Douglas County Courthouse. They believe they are the first American Indian couple to legally wed here. Darla is Lakota Sioux and Cheyenne and Arapaho, and Mattisa is Navajo. 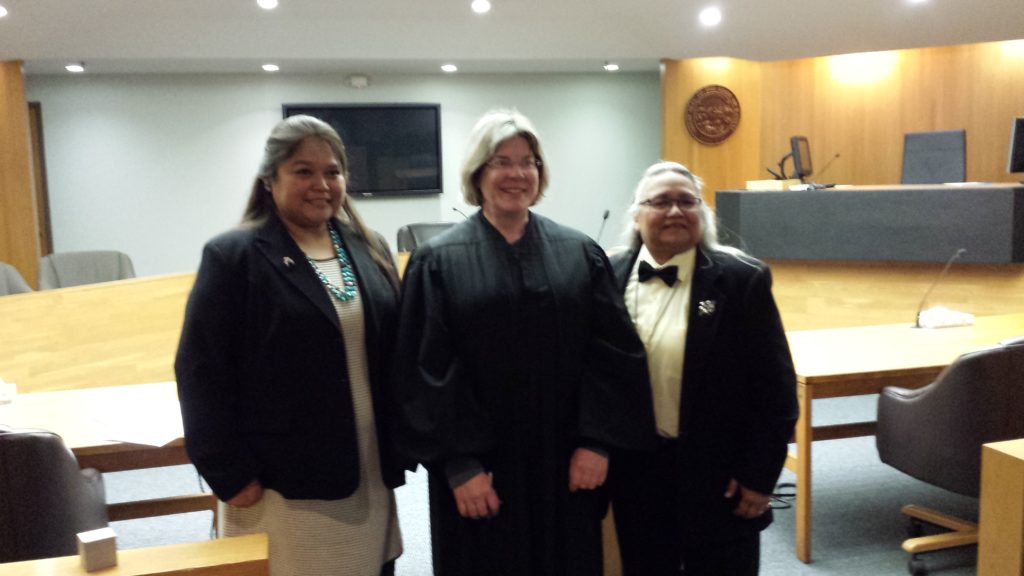 Mattisa Harrison (left), Judge Kay Huff and Darla Harrison pose for a photo after Mattisa and Darla were married by Huff March 25, 2015, at the Douglas County Courthouse. 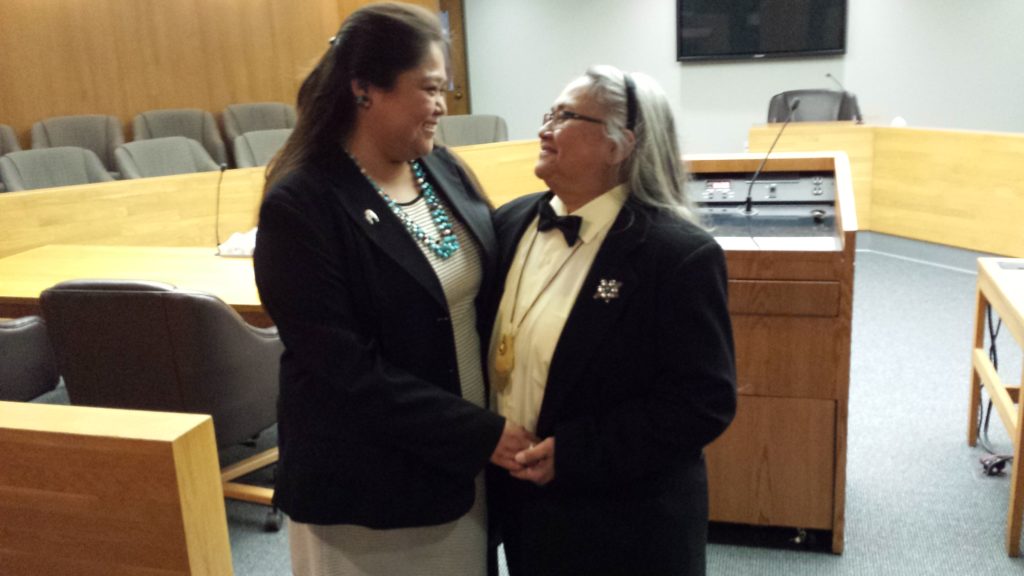 Mattisa (left) and Darla Harrison are pictured at their marriage ceremony March 25, 2015, at the Douglas County Courthouse. They believe they are the first American Indian couple to legally wed here. Darla is Lakota Sioux and Cheyenne and Arapaho, and Mattisa is Navajo.

Darla, 60, and Mattisa, 40, said they hope their Kansas marriage license will ensure access to benefits such as spousal insurance or hospital visitation rights in the community where they live.

But their cultural traditions and faith are important, they said, so they also want to have a traditional Indian wedding ceremony soon. Even as two-spirit people, they’d like to incorporate the same symbolism other Indian couples do, like ceremoniously sharing a blanket.

“If you do it culturally, ceremonially, then that is a union … that will never dissolve,” Mattisa said. “It’s forever.”

In 2009, the Coquille Tribe of Oregon became the first — at least in modern times — to recognize same-sex marriages.

Now at least a dozen tribes do so, according to Freedom to Marry, a national same-sex marriage advocacy organization. As federally recognized sovereign nations, tribes can create their own policies, including on same-sex marriage.

Darla’s mother was Lakota Sioux and her father Cheyenne and Arapaho. Mattisa is Navajo.

Cheyenne and Arapaho does recognize same-sex marriage, but Darla said she didn’t consider being married by the tribe an option because she’s not a formally enrolled member and doesn’t live on the reservation.

Again, she wanted her marriage to count where she lived — in Lawrence.

While Friday’s Supreme Court ruling may prove influential or inspirational to the issue of same-sex marriage in Indian Country, it has no immediate legal impact on tribes, said Elizabeth Kronk Warner, Kansas University associate law professor, director of KU’s Tribal Law and Government Center and a Chippewa tribe member.

That said, Supreme Court precedent does influence tribal governments, so in that way more tribes may now be more likely to conclude they should adopt “marriage equality,” Kronk Warner said. That can be a slow process because unlike the Supreme Court ruling, which has sweeping authority over the 50 states, each tribal government must go through a process of changing its own constitution or codes, she said.

Since then, she said, “we’re seeing more and more tribes do it.”

The term two-spirit is contemporary, adopted in 1990 at an international gathering of American Indian LGBTQ persons in Winnipeg, said Stephanie Fitzgerald, KU associate professor of English and a faculty member in the Indigenous Studies program.

“There are 566 federally recognized tribes in the United States, each with their own unique language, history, ceremonial practices, cosmologies and languages,” Fitzgerald said. “Many of these groups had words in their respective languages for what some refer to today as two-spirit.”

The idea behind the term hearkens way back.

Historically some tribes considered those individuals to be deities or gave them special roles in the society, such as healers, or special roles of honor to dance at powwows.

Over the years, assimilation and influence from churches condemned that part of native culture and took it away, said Steven Barrios of the Montana Two Spirit Society, a two-spirited Blackfeet tribe member and friend of Darla and Mattisa.

“Now we’re reclaiming our rightful place,” Barrios said. “And a lot of our tribes are respecting that.”

Mattisa said she generally dislikes labels put on any person.

But if they must, she and Darla prefer to be described as “two-spirit” over mainstream terms used to describe transgender people.

Growing up on the Navajo reservation in Arizona, Mattisa said she didn’t recall any special attention on two-spirit people, though there was tolerance.

“We were told not to make fun of or say anything bad, reserve the words that you say,” she said. “Just be respectful of all human beings.”

She and Darla like the idea that two-spirits were welcome in traditional Indian culture rather than outcast.

“Everybody had a role,” Darla said. “They have a place in the circle.”

“Ever since I was born, I knew that I was the way that I am,” Darla said.

Her parents never tried to make her play with dolls, she said, they just didn’t talk about it. She didn’t come out until she was older, while a student at Haskell Indian Nations University.

Mattisa, too, came out later in life, after dating throughout her 20s.

“I did do what was socially acceptable,” she said. “It didn’t fit.”

They believe the spirits led them to one another.

Darla wanted someone to grow old with. She said she had prayed to find a person who shared her commitment to faith, prayer and clean lifestyle — no drinking or drugs.

A few years ago, Mattisa underwent a number of surgeries after a serious car accident. During that time she gave a lot of thought to what she wanted from her life.

I’m complete, she decided, but finding someone would make life even better.

In 2011, Darla and Mattisa met on Facebook and started talking.

They met in person last summer.

Darla went to Mattisa’s home in New Mexico, and the two traveled together to a two-spirit retreat in Montana, they said, where Darla proposed and Mattisa said yes.

They were married March 25 by Judge Kay Huff, several months after Douglas County issued its first same-sex marriage licenses, on Nov. 13, 2014. Just a couple friends and Mattisa’s sister were with them.

Darla and Mattisa are soft-spoken.

You won’t find them at the front of a gay pride parade, they said, and they don’t usually broadcast their lifestyle unless it comes up in conversation.

“They’re both very strong and very sensitive,” said Jeanette Kekahbah, of Lawrence, a longtime friend of Darla’s who witnessed their wedding. “And they’re very respectful of traditional values and connections.”

Darla, as much as she would like to, said she does not dance in men’s regalia because she does not want to offend anyone who is against her way of life. She said she owns eagle feathers, a gift from a friend, but because those are traditionally reserved for male dancers she dances with red tail hawk feathers instead.

At two-spirit retreats she’s attended for many years, she said, she is able to freely dance in men’s regalia.

After the wedding, with Kekahbah drumming, Darla performed an impromptu joyful dance on the courthouse lawn. She said it was to honor her and Mattisa’s union and other two-spirit people.