For 18 years, Christine Fisher has been one of just three or four cardiologists practicing in Hays, where patients may live hours away and ambulances are scant.

Patients waiting to call for help until they can’t wait anymore is routine, she said.

“Heart attack after heart attack, stent after stent, it’s just such an inefficient way to do this,” Fisher said.

Fisher said she’d rather be treating causes than waiting to treat the often deadly or debilitating results of heart attack and stroke.

Prevention is one part of a multipronged effort by Kansas University Hospital to develop a new approach to heart attack and stroke care in rural areas. 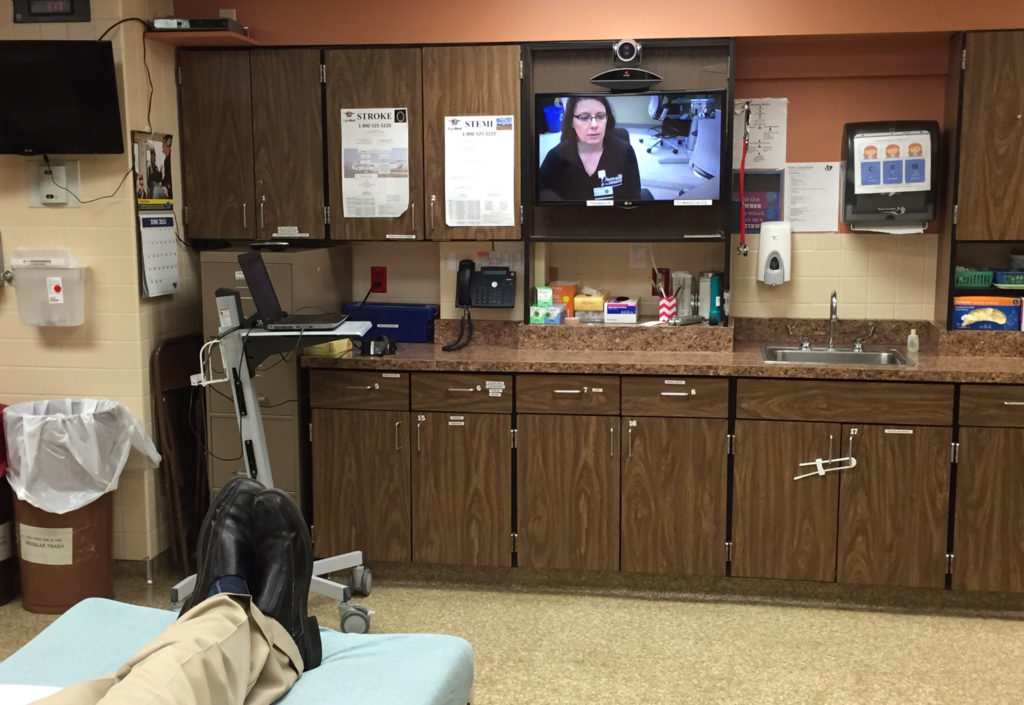 A doctor appears on a monitor inside the Phillips County Hospital in Phillipsburg, Kan., to demonstrate an eEmergency telemedicine system that will be deployed to participating facilities as part of KU Hospital's Kansas Heart and Stroke Collaborative. The effort includes piloting the use of telemedicine inside Western Kansas emergency rooms, with board certified doctors and services provided by a specialty company based in South Dakota, Avera. 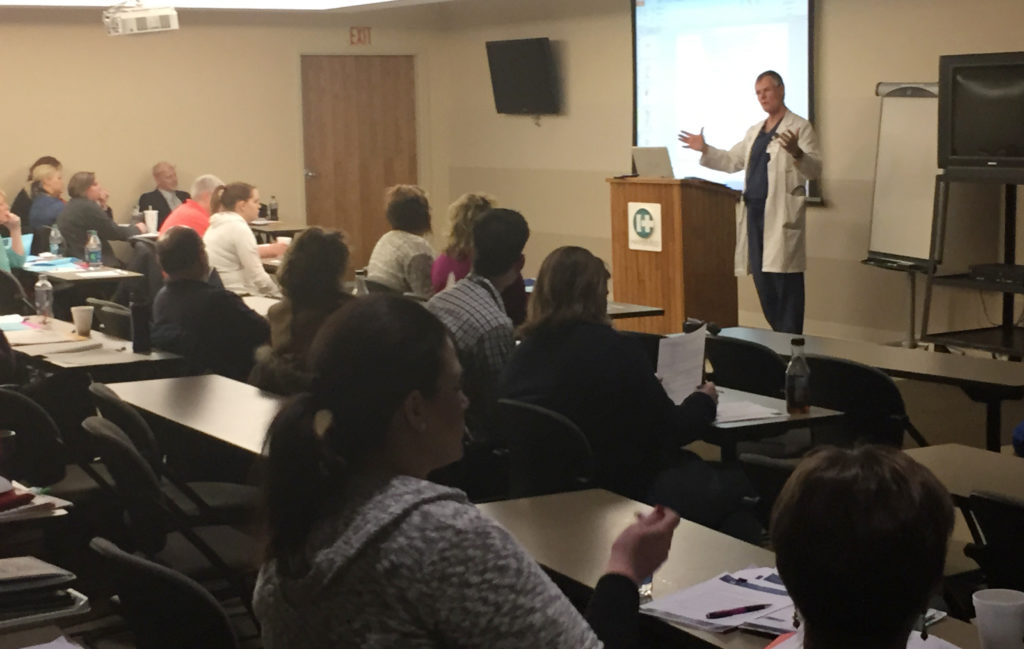 The hospital is one year in to a three-year, $12.5 million grant from the U.S. Centers for Medicare and Medicaid Services Innovation Center. The grant enabled the hospital to create the Kansas Heart and Stroke Collaborative, in which KU teams up with 14 small hospitals and medical centers Western Kansas.

If it works — proven by meeting grant goals of saving lives and reducing health care costs — it could become a model for heart and stroke care in rural areas.

Prevention efforts will roll out in September. Moser said those would include “fairly aggressive” smoking cessation programs and high blood pressure and cholesterol treatments.

In 2011 in Kansas, 5,321 people died of heart disease and 1,333 died of cerebrovascular diseases, according to KU Hospital.

“The highest mortality rates were in rural communities,” Barbara MacArthur, the hospital’s vice president for cardiac services, said in a news release about the collaborative. “Many deaths and long-term disabilities of heart disease and stroke can be prevented if the right standards of medical care are accessed immediately. Under this program, hospitals working together can provide a continuum of high quality care with much better outcomes.”

Moser formerly was a family physician in his hometown of Tribune — so far west it’s nearly on the Colorado border.

Even though KU Hospital is at the far east edge of the state, it has a goal of improving care across the whole state and hopes its heart and stroke expertise can help more “resource challenged” hospitals, Moser said.

Moser said pieces of the plan include:

• Educating healthcare providers on and implementing consistent protocols for responding to a heart attack or stroke, for example quickly assessing whether to administer an electrocardiogram test or clot-busting drugs.

“The quicker that happens, the better the outcome,” Moser said.

• Bringing telemedicine to the ER. KU Hospital is contracting with a South Dakota company to do this. Via monitors in their ERs, at the press of a button rural hospital staff can bring up a board-certified emergency physician and critical care nurse stationed at the company’s designated “bunker” in South Dakota.

If it works well, Moser said, KU Hospital would like to develop its own telemedicine system using its own specialists in Kansas City.

• Hiring care coordinators. These people would work with patients discharged from larger facilities, like KU Hospital, to help make sure they get their medications, know how to take them and make follow-up appointments when they get back home to their small towns.

“We know that will reduce readmissions,” Moser said.

• Putting health coaches in every community to help link patients with community resources and teach them self-management skills, such as taking their own blood pressure and increasing physical activity.

Fisher is leaving her private practice this year to become director of population health for the Kansas Heart and Stroke Collaborative.

She said she’s excited about boosting preventative care. She’s also excited about deploying telemedicine, which she said could help recruitment by taking an edge off the burden on doctors in faraway posts, where their resources are limited and schedules usually “rigorous.”

“There’s just no way we’re ever going to have enough physicians to cover the area,” she said. “So with that, how can we keep the standard of care high? I think the answer is technology.”