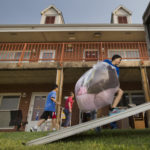 Hannah Au Yeong, 13, lugs a bag of blankets and pillows up a ramp into moving van at Stouffer Place apartments on Tuesday, June 30, 2015, the final day the family housing complex was open. The Au Yeong family, from Kuala Lumpur, Malaysia, lived at Stouffer Place for four years.

Kansas University’s Stouffer Place apartments closed for good on Tuesday, marking the end of an era for the 58-year-old housing complex and for many families who called it home.

The 25-building complex opened in 1957 as married-student housing.

Tuesday morning Junghee Lee and his family toted items from their second-floor apartment in Building 12 to an awaiting U-Haul.

Lee, his wife and two children first moved into Stouffer Place 12 years ago from South Korea so Lee could pursue a master’s degree at KU. They moved back to Korea for a few years, then returned to KU — and Stouffer Place — three years ago.

The Lee family isn’t looking for a new apartment in Lawrence. Lee completed his doctoral degree in social welfare and got a job in Hays, where they are moving.

But they will miss the community of Stouffer Place, including other international students who were attracted for the same reasons, he said.

“This is a really wonderful place,” Lee said. “I was really sorry to hear this complex is being redeveloped. I think many international students have the same feelings.”

The 283-unit Stouffer Place doesn’t have bells and whistles. Decor, even in remodeled buildings, is straightforward.

But its cheap rent and on-campus location kept it in demand.

Monthly rent last year was $491 for one-bedrooms, $550 for two-bedrooms, $721 for renovated two-bedrooms and $913 for three-bedrooms — and that included utilities, Grosshans said. He said two- and three-bedroom units were usually quickly filled by returning Stouffer residents, who had first dibs, moving up from smaller apartments.

Ali Rahmati, a doctoral student in physics from Iran, moved out of his one-bedroom apartment of three and a half years on Tuesday.

He moved from the Greens at Alvamar because Stouffer Place was cheaper and closer to campus, said Ali, who does not have a car. He also enjoyed the camaraderie of other international students he met there.

“It was comforting,” he said. “You’re basically around people that are internationals who are basically in the same situation, far from their families.”

Rahmati said he was moving to Campus View apartments off 23rd Street, where he plans to catch the bus to campus.

Chris Anderson moved in four years ago with his son, now 6. The rent was cheap, he took his son to KU’s Hilltop Child Development Center next door, and he escaped the noise and partying common at other apartment complexes in this college town, he said.

Anderson’s girlfriend, Lauren Ripple, who lived with them at Stouffer, said she liked how all the kids could play together on green space and jungle gyms right outside the buildings.

“There’s a park in the front yard,” she said. “You don’t really find that anywhere else.”

Anderson, who just finished his undergraduate degree in chemistry, and Ripple, a microbiology major who hopes to transfer to another school, for now are moving to Overland Park, where their families live.

Ripple said she was actually a second-generation Stouffer Place resident. Her mom lived there as a newlywed in the 1970s and, even then, was attracted by the complex’s convenience.

KU’s long-term plans call for big changes to the hillside that’s home to Stouffer Place, and it does not include replacing family housing.

The area will eventually be home to new integrated science buildings, an open space tentatively dubbed Stouffer Green and some apartments for single students, according to the 2014-2024 Campus Master Plan.

Grosshans said anecdotally and through a survey and focus group process, Stouffer Place residents overwhelmingly cited the affordable rent as a top reason for living there.

But Stouffer Place buildings have come to the end of their useful life, he said, and the university would be unable to build new ones with comparably low rents.

“We definitely could not meet their price point on new construction,” he said.

Details on future apartments in the area aren’t set, Grosshans said. Those will depend on more study and how much space is left after science buildings are planned.

There’s no date set yet for razing Stouffer Place, he said.

For now, the buildings are vacant and will stay that way.