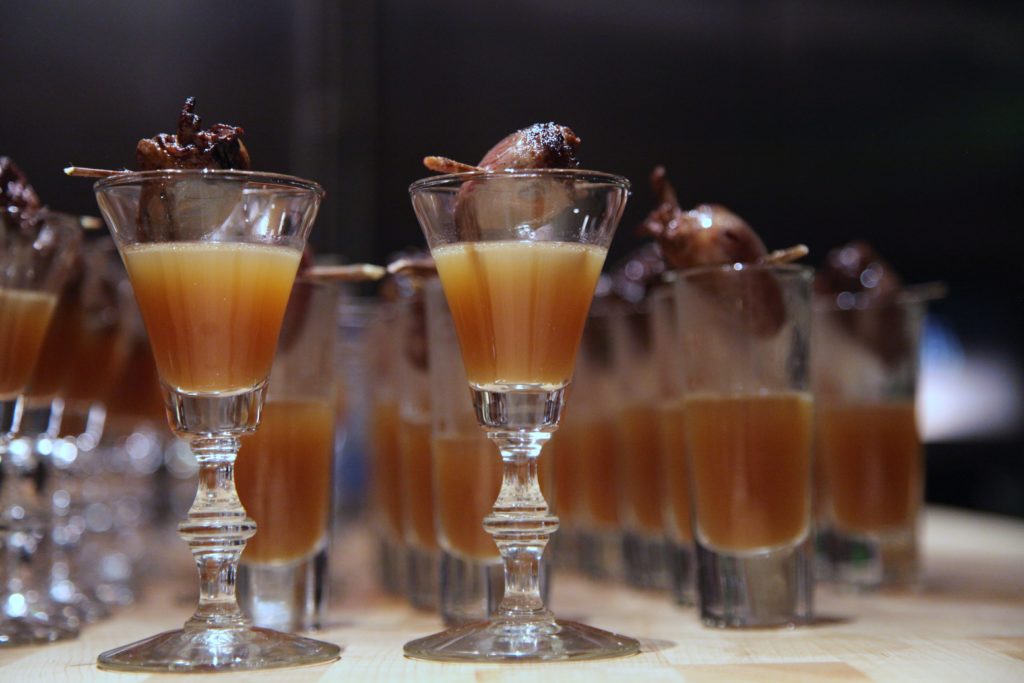 Grilled duck heart, served over a sherry glass of dashi broth, was one of the courses at Lawrence Local Table's Cellar

It’s an appropriately brisk Tuesday evening — the day before Lawrence’s first substantial snowfall of the year — and the air outside 715 restaurant hovers just above 40 degrees.

Still, the members of Lawrence Local Table — a recently formed collective of area culinary professionals — aren’t complaining. On Tuesday, the group hosted its first collaborative dinner at 715 to a near-packed restaurant of about 60 diners.

The event, dubbed “The Cellar Supper,” took its inspiration from the traditional food-preservation techniques employed by Midwesterners in the days before refrigeration. 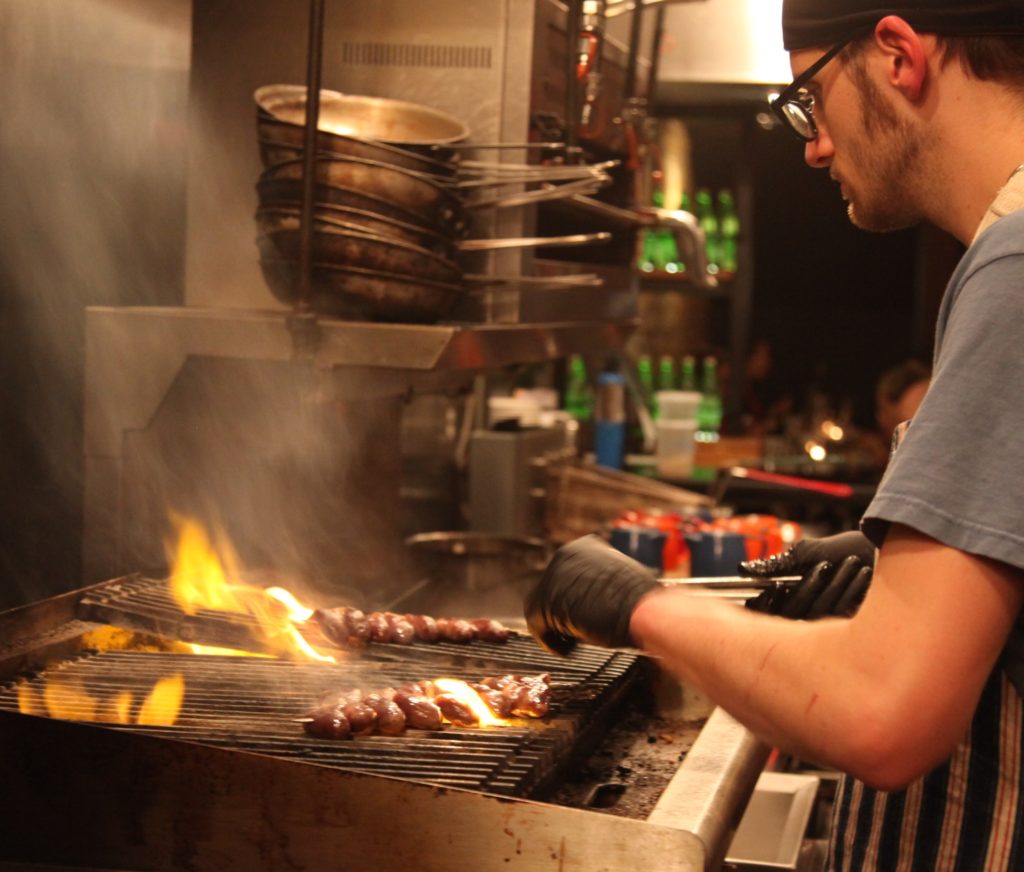 Alix Sterling, of 715 and Hank Charcuterie, grills skewered duck hearts, one of the courses at Lawrence Local Table's Cellar

“That was more of a play on the winter theme,” jokes Louis Wiggen-Toccalino during a predinner reception. “Of course, we didn’t know it was going to be 70 degrees last week.”

Luckily, temperatures cooled down just in time to make the most of the seven-course menu, which featured ingredients such as pickled confit mushrooms and fermented bean.

The goal is to create a network of local eateries that will ultimately strengthen the Lawrence culinary scene, “putting us on par with, say, Kansas City,” he says.

“The last couple of years, there have been so many new businesses that so many people are talking about,” Wiggen-Toccalino says. “And so, it’s just a way to weave that web together so that we all thrive as a group.”

The collective also includes Vaughn Good and Jay Tovar-Ballagh of Hank Charcuterie, Jess Anthony of Wood + Salt, Zach Thompson and Katrina Weiss from 715, and Taylor Petrehn from the soon-to-open 1900 Barker.

There are also the “sidekicks,” such as Kristine Hull, Good’s partner, who also help make it happen. About 20 people in total volunteered to work The Cellar Supper on Tuesday night, lending their skills — cooking, serving, bartending — to the cause.

“It’s a really nice thing,” says Anthony, who also works as a server and bartender at 715. “All of us put our own money in to start this, and then I think we’re going to keep part of that budget rolling to do future events. This is like our seed pod, our starting point.”

Right now, there’s “a lot of potential” to work with, she says. The group is looking to expand, and with growing interest from other culinary professionals in town, odds are looking good for a second Lawrence Local Table meal as early as March or April.

The venues will change and so will the menus, says Vaughn Good, who envisions something a little more casual and “accessible to the masses.” He’s thinking barbecue or a whole-hog roast.

Tuesday’s dinner, he admits, was a bit of a gamble, with Good’s favorite course of the night — a grilled duck heart, served over a sherry glass of dashi broth — causing the most trepidation.

He wasn’t sure how guests would respond to the dish, but it turned out to be one of the night’s biggest hits.

With all the “positive feedback” generated from the meal, it seems folks are hungry for more of what Lawrence Local Table is dishing out.

“It was really fun to be in the kitchen and look out to see people eating grilled duck heart on a stick,” Good says.