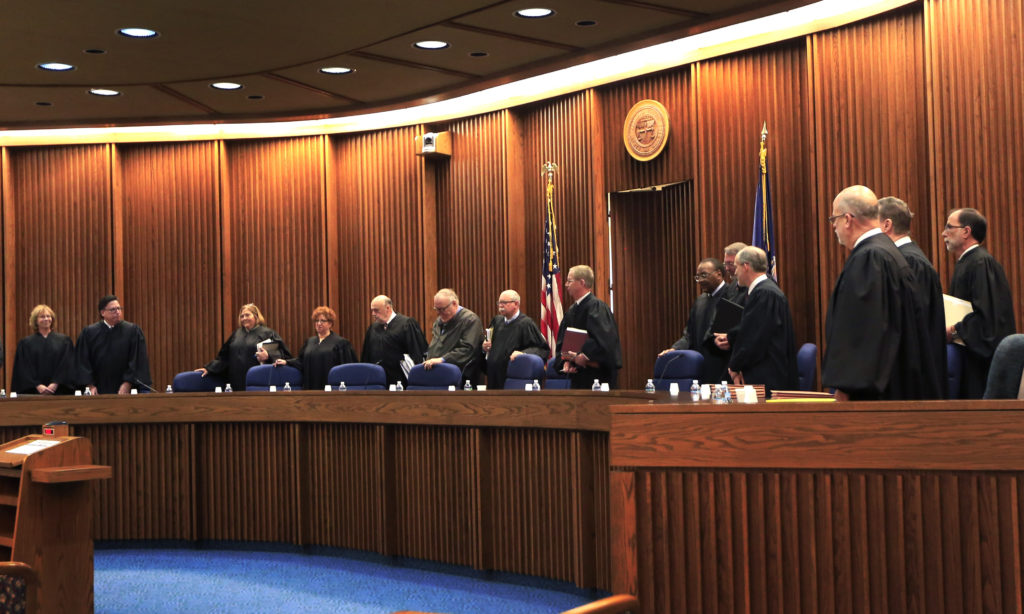 The full 14-member of the Kansas Court of Appeals enter the Supreme Court courtroom in Topeka, Kan., to hear oral arguments Wednesday, Dec. 9, 2015. The lawsuit against a Kansas ban on a common second-trimester procedure has forced the state Court of Appeals to consider how much the state constitution protects abortion rights.

Topeka ? Abortion rights advocates on Wednesday asked all 14 members of the Kansas Court of Appeals to find, for the first time, that the Kansas Constitution provides the same guarantee to privacy rights, including the right to an abortion, that the U.S. Supreme Court has found in the federal Constitution.

But attorneys for the state, as well as anti-abortion lobbyists, argued that the state constitution is much different, and that no such right can be found there.

Those arguments played out during a historic hearing before the appellate court, which has not sat all together, or “en banc,” since the 1980s. And it’s a case that will likely have political fallout, not only in the Kansas Legislature, but also for the judges themselves, six of whom must stand for retention in the 2016 elections.

The case involves a bill enacted this year, Senate Bill 95, that bans the most commonly used procedure for second trimester abortions, a procedure known as “dilation and evacuation,” or D and E, but which abortion opponents refer to as “dismemberment abortion.”

Mary Kay Culp, executive director of the anti-abortion group Kansans for Life, said the plaintiffs in the case were merely trying to avoid going to federal courts, which is much more conservative today than it was in 1972 when the U.S. Supreme Court decided Roe v. Wade, the landmark case that legalized abortion.

“That’s exactly what they’re trying to do because this (Kansas) court has got four (Kathleen) Sebelius appointees; two by her Lt. Gov. Mark Parkinson; and then one by (former Republican Gov. Mike) Hayden, who was not necessarily on our side,” Culp said.

But Janet Crepps, the lead attorney for the plaintiffs who are challenging the new law, denied that she was trying to avoid the federal court system. 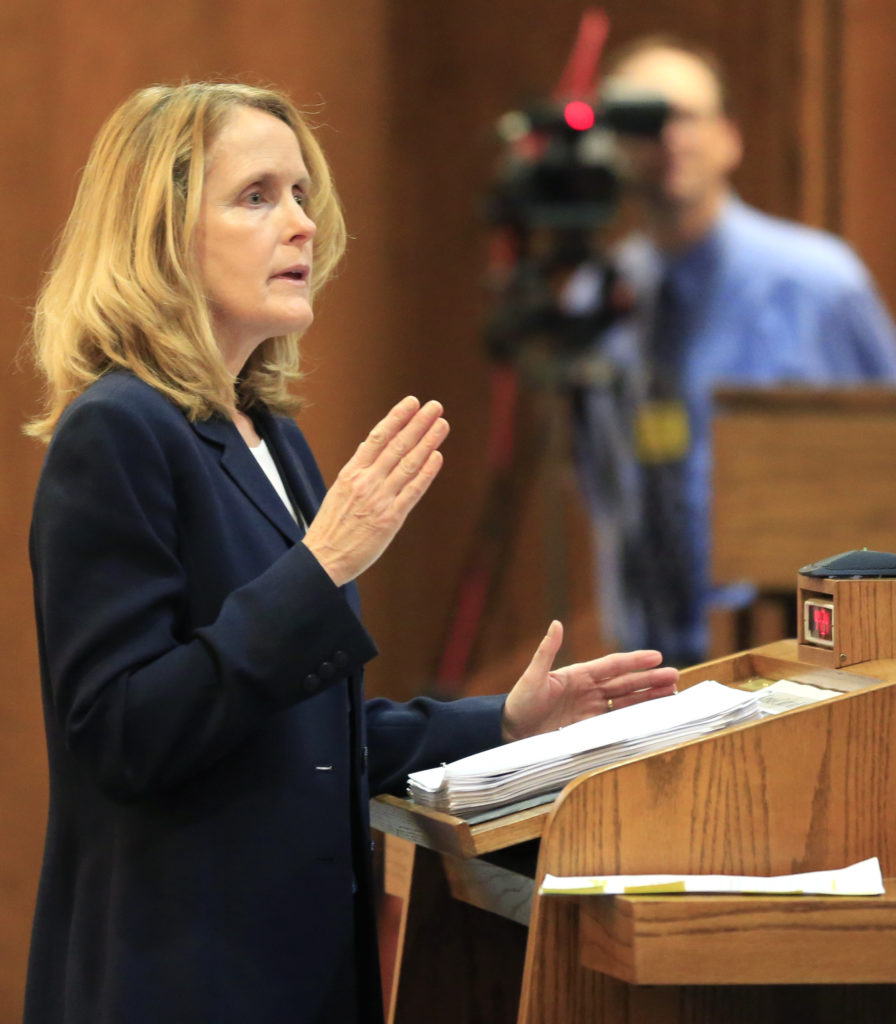 Janet Crepps, a senior attorney for the Center for Reproductive Rights makes oral arguments in front of the full, 14-member Kansas Court of Appeals in Topeka, Kan., Wednesday, Dec. 9, 2015. The lawsuit against a Kansas ban on a common second-trimester procedure has forced the state Court of Appeals to consider how much the state constitution protects abortion rights.

It’s possible, however, that the court may sidestep the broader constitutional issue and focus instead on technical procedural matters in the case.

That’s because the core question before the court is whether a Shawnee County judge acted properly when he issued a temporary injunction in June, blocking enforcement of the new law until the court could hold further hearings to determine whether the law is constitutional.

Some of the appeals court judges seemed intent to focus only on that narrow issue.

“The fact is, we are at a very preliminary stage in this case,” said Judge Karen Arnold-Burger, one of the six judges who will stand for retention next year. “Not to oversimplify, but we are to take the status of the law as it is today, based on language that has been cited by my colleagues, and determine whether there’s a likelihood of success on the merits of the underlying case.”

One of the problems, though, is that the Kansas Supreme Court has never been clear about whether the Bill of Rights in the Kansas Constitution offers the same protections that are found in the 14th Amendment of the U.S. Constitution, which says states cannot deny any citizen “life, liberty, or property, without due process of law; nor deny to any person within its jurisdiction the equal protection of the laws.”

Since that amendment was ratified in 1865, federal courts have interpreted the due process clause to include what is called “substantive due process,” the idea that any governmental interference with a fundamental right be fair, reasonable and in pursuit of a legitimate government interest.

But the Kansas Constitution, which was written in 1859, six years before the 14th Amendment, contains no due process clause. Its bill of rights contains only an equal protection clause that says, “All men are possessed of equal and inalienable natural rights, among which are life, liberty, and the pursuit of happiness.”

Steven McAllister, the solicitor general for Kansas and a Kansas University law professor, said that language was chosen to echo the Declaration of Independence, not the federal Constitution, and he argued that there is no such thing as “substantive due process” under the state constitution. 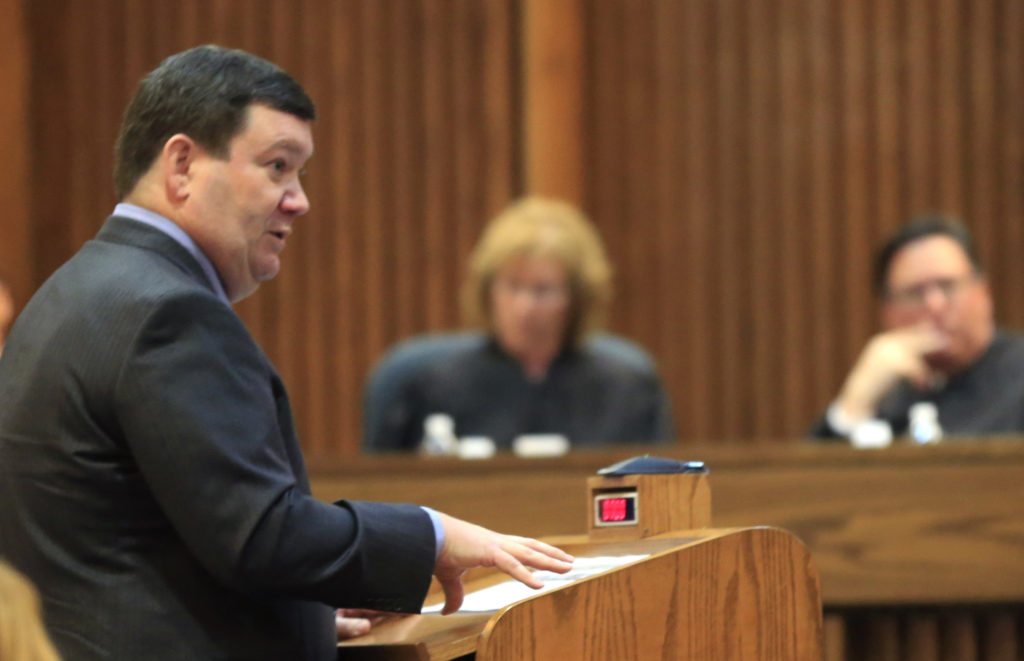 But Judge Steve Leben, who also stands for retention this year, noted that state courts have often recognized the Kansas Bill of Rights as mirroring the federal Constitution.

“There are maybe 10 cases that say specifically that they are given much the same effect as the due process and equal protection provisions,” he said.

But McAllister said the Kansas Bill of Rights has never been interpreted to recognize a substantive due process right.

Plaintiffs attorney Crepps said after the hearing that the state was taking an “extreme” position that could have wide-ranging implications that go far beyond abortion rights.

“Substantive due process has been recognized to protect not just abortion, but the right of contraception, inter-racial marriage, homosexual relationships, and a whole realm of personal privacy that the government isn’t entitled to intrude in,” she said. “I think that the citizens of Kansas would actually be shocked to hear that their state government takes such an extremely narrow view of their rights under the Kansas Constitution, rights that they take for granted.”

The court did not indicate when it would issue a ruling, but it typically renders decisions within four to six weeks.