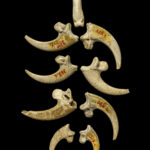 Eight eagle talon ornaments made by neanderthals were researched by a team that included David Frayer, Kansas University professor emeritus of anthropology.

Some Neanderthals were more sophisticated than we thought, a study that includes a Kansas University researcher has found.

Eight eagle talons have marks and polishing that researchers say indicate they were once part of a piece of jewelry, said David Frayer, KU professor emeritus of anthropology who was part of the study.

“The idea that the Neanderthals were making ornaments to glam themselves up goes against notions of them as unsophisticated,” Frayer said.

“This is the kind of discovery that really changes our perceptions of Neanderthals and has a big impact on the field.”

Findings from the study were published this spring in an article, co-authored by Frayer, in the journal PLOS ONE.

The eight talons were found in present-day Croatia and are approximately 130,000 years old, Frayer said. While it is unknown whether the talons were a necklace or a bracelet, they were attached to one another, resulting in polishing of the bones from where they rubbed together. The cut marks on the talons also have smooth edges — a sign that there was some kind of fiber binding that held them together, Frayer said.

In addition to the signs of manipulations, one type of talon was repeated three times, so there were at least three different birds used, Frayer said.

“It tells us something about the sophistication of Neanderthals, that they were able to accomplish this,” he said.

The talons were discovered more than 100 years ago from a single level at a site that was originally excavated between 1899 and 1905. Frayer said one of the things that surprised him about the discovery is the signs of manipulations had been missed for more than 100 years — a fact that he attributes to perceptions of Neanderthals as less advanced than and distinct from humans.

“I’ve always thought that they were one of us, but everybody had their mind made up that Neanderthal was a separate species,” Frayer said.

For Frayer, the research into these ornaments continues. He will be going back to Croatia in January 2016 to investigate further, trying to determine what the binding fiber is made of and to confirm any use of pigments to dye the talons.