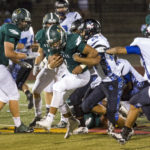 “I don’t think we were ready for them tonight,” senior receiver and defensive back Andrew Keating admitted shortly after FSHS fell to 2-2.

The Firebirds actually looked unstoppable on offense their first two possessions. They opened with a seven-play scoring drive, highlighted by a 38-yard Carson Bowen run and capped by a four-yard Joe Lane rushing touchdown.

It only took Free State 10 plays on its next possession to go 80 yards, and sophomore Zion Bowlin ran the ball in from five yards out with 3:47 to play in the first quarter, when FSHS took a 14-7 lead.

However, as senior lineman Scott Frantz pointed out, that kind of success proved unsustainable, even though it felt as if the Firebirds were on their way to a blowout win, instead of their second home loss of the season.

“We marched down there pretty easy and got two touchdowns,” Frantz said. “I think some of our players thought it was going to be a cakewalk from there on out. I don’t know if that’s what lost us the game, just our mentality.”

It certainly didn’t help Free State that Potts repeatedly delivered momentum-shifting shots to the gut. The 6-foot-1 Leavenworth senior returned a kickoff 95 yards for a TD in the first quarter and took the second-half-opening kickoff 94 yards for another score and a 28-14 Pioneers lead.

“That zapped a lot of momentum, obviously, both times” Lisher said, adding FSHS has now surrendered three TD returns through four games. “We’re gonna have to figure something out on the kickoff team.”

Although Leavenworth (2-2) picked up just three first downs in the first half, it also scored three touchdowns. Potts’ 61-yard interception return of a Bryce Torneden pass in the second quarter came shortly after he caught a 30-yard TD pass from senior LHS quarterback Landry Hodges. By the end of the night, Potts had 330 total yards, and all of them devastated Free State.

After Potts’ third touchdown, FSHS opted for an onside kick late in the third quarter, trailing 28-21 following a one-yard TD run by senior running back Lane. Firebirds Darian Lewis and Blake Haley scrambled to cover the ball before Leavenworth could.

“We were fortunate enough to get that,” Lisher said later. “At least they didn’t score on us.”

But Free State couldn’t capitalize, either. Even with a short field, the Firebirds turned it over on downs a minute into the fourth quarter.

“We just needed to execute better as the game went on,” Lisher said of Free State’s offense, which produced 322 rushing yards behind Torneden’s 165-yard night. “There were plays that we missed. There are just things we need to do better when reading defenses.”

To Leavenworth’s credit, the Pioneers followed with the most impressive offensive drive of the night: 20 plays, 69 yards, nearly 10 minutes of clock devoured and a three-yard rushing touchdown from Sanchez Williams. Game over.

Said Frantz of that seemingly never-ending drive, when the Pioneers converted four third downs and a fourth down: “Toward the end there, we just couldn’t get off the field on defense. We just had mental breakdowns here and there.”

Keating, who caught two passes for 19 yards and came up with an interception on defense, said special-teams breakdowns shouldn’t have impacted the way FSHS performed on offense or defense.

“We’ve just got to go out there and play hard,” the senior said. “We weren’t able to make some big plays today. They did, and that was the difference in the game.”

Lisher said coaches and players have to make sure the Firebirds are better mentally prepared.

“It was just a matter of do we stop ourselves, or does Leavenworth stop us? When you look back,” the coach said, “mostly it was us.”