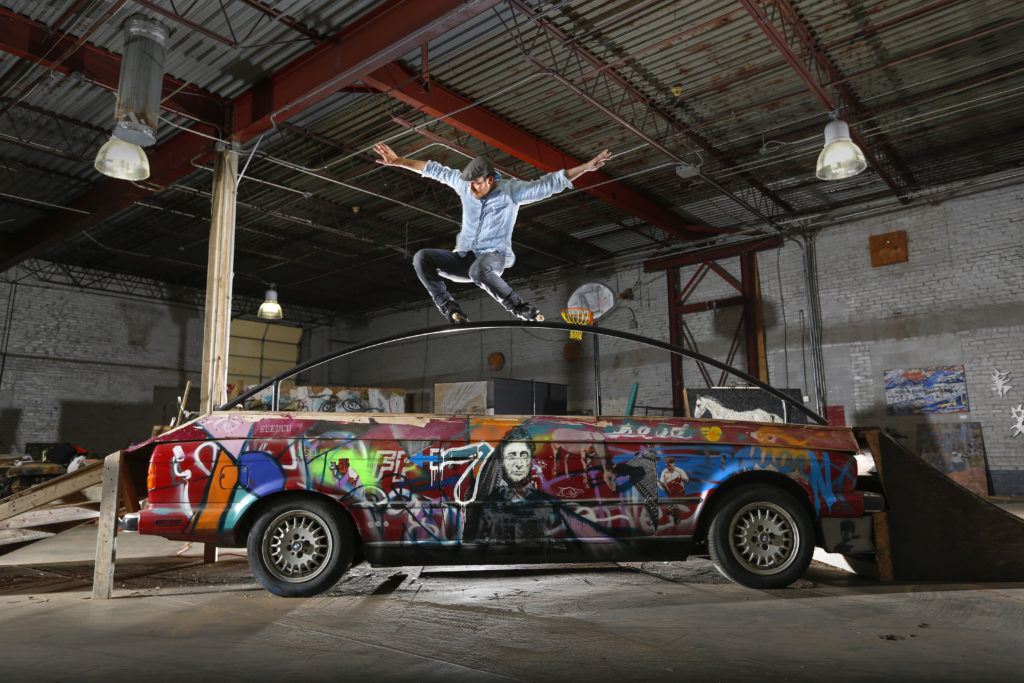 What: John McCaughey, an artist-in-residence at the Lawrence Arts Center, will lead a large-scale printmaking project using a steamroller.

Where: 900 block of New Hampshire Street

What: Pre-parade street party. Decorate your car, bike, skateboard or whatever. Live music. The arts center provides cardboard cars for kids to paint, while supplies last.

Where: 900 block of New Hampshire St.

Where: The route begins outside the arts center

Three weeks ago, Jeremy Rockwell’s 1987 BMW 325i convertible sat in his Lawrence driveway, collecting dust. The car, damaged in a wreck two months before, had already been replaced. Rockwell didn’t want to let go of it just yet, but he didn’t know what to do with it either.

He found his answer in the Art Tougeau parade, an annual event that displays wacky, innovative DIY vehicles from Lawrence and across the country.

Now, Rockwell’s old ride resides at SeedCo Studios, 826 Pennsylvania St., where he and several friends have transformed it into a fully functioning mobile skate park, complete with detachable ramps and a 15-foot rail. Rockwell’s creation will be one of the featured pieces in the parade on Saturday.

“I just wanted to make it skateable and also use it as a canvas,” said Rockwell, an avid rollerblader. “I wanted it to be simple and elegant. I hope people see this as an elegant object for something that has such an aggressive, bad-boy stigma to it.”

The “thrashmobile” will mark Rockwell’s debut entry in the Art Tougeau Parade, which will start at noon Saturday. Participants will travel south from the Lawrence Arts Center, 940 New Hampshire St., turn right onto 11th Street, and then turn right again onto Massachusetts Street. They will continue north on Massachusetts Street for four blocks before turning right onto 7th Street. The vehicles will then take New Hampshire Street south and ultimately end up at the Replay Lounge, 946 Massachusetts.

The arts center, a longtime Art Tougeau partner, will kick off the festivities Friday with a street party in the 900 block of New Hampshire Street. The event will run from 5-9 p.m. and will feature live music, children’s activities and food from Biemer’s BBQ, Free State Brewing Company and Sylas and Maddy’s Home Made Ice Cream. From 3-8 p.m., John McCaughey, an artist-in-residence at the arts center, will lead a group of students and local artists in a large-scale printmaking project, using a steamroller to imprint an image onto a large piece of fabric or paper.

After Friday’s street party there will be an outdoor screening of Harrod Blank’s 1992 film Wild Wheels on the south wall of the arts center.

Several of this year’s parade entries will also be on display Friday, including Rockwell’s. The abundance of local participants is part of what makes this particular art car parade an enduring Lawrence tradition, said Ben Ahlvers, exhibitions director at the arts center.

“Lawrence is sort of a DIY kind of town, and art car culture, I think, has that kind of character built into it inherently” he said. “It’s very laid back, very casual, and it’s fun.”

While Rockwell’s car required several weeks’ of work from a team of eight people as well as donations, Ahlvers said the bulk of entries simply show up the day of the parade.

“There’s kids who will come with their cardboard cars, or they’ll just walk in the parade with cardboard strapped to their shirt or something,” Ahlvers said. “It’s really accessible.”

Rockwell, who splits his time between serving as the assistant to the arts center’s exhibitions director and helping manage SeedCo Studios, hopes to instill a similar spirit of community with his art car.

He’s already shared the mobile skate park with other skaters, and expects more to travel to the parade’s pre-party Friday for a demonstration outside the arts center.

After the parade, Rockwell plans to keep adding to his creation with the hope that it might make appearances at similar events throughout the Midwest.

“I could just give it away to a scrapyard for a few hundred bucks or try to sell off the transmission, or I could keep it and make it an ongoing project that hopefully gets better and better,” Rockwell said. “I’d like to make more skateable sculptures in the future — this is the entryway into that adventure.”