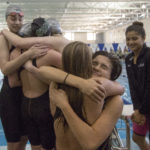 Members of the Free State swim team share hugs near the pool following the final event at the state swimming and diving championships, held Saturday in Topeka.

In the final event of the Class 6A swimming and diving championships on Saturday, Free State’s 400-yard freestyle relay team trailed by more than two seconds when junior Courtney Caldwell jumped in the pool as the anchor leg.

Caldwell sped past Shawnee Mission East and helped the relay team (Eliza Anderson, Simone Herlihy and Alexa Malik) win a state championship. It was an exclamation point on the day as Caldwell won two individual state titles and the Firebirds finished second in state at the Capitol Federal Natatorium.

Caldwell swam her 100 yards of the relay in a blazing 49.40 seconds, which topped the next fastest time from any leg in the event by nearly three seconds.

“We kind of knew that was coming, and they did, too,” FSHS coach Annette McDonald said. “It was really exciting to watch. She is a phenomenal swimmer.”

Caldwell won state titles in the 100 free and 50 free for the third straight year. She set a state record during her victory in the 100 (50.28), topping the mark she set last year. Sophomore teammate Sydney Sirimongkhon-Dyck finished just behind Caldwell to place second in the 50.

“I was really happy,” Caldwell said. “They were my best (times) all season, so it was a good day.”

“They just gave it their all today, and I’m so proud of everybody and how they’ve done, all the swimmers and divers,” said McDonald, who earned Kansas Swimming Coach of the Year honors, voted on by all of the state’s coaches.

Junior Haley Johnson took sixth place in diving, senior Kate McCurdy was seventh in the 200 IM and eighth in the 500 free, and junior Kat LaFever took fifth in the 100 breast.

“It felt amazing,” LaFever said. “I’ve never got podium before. I had a shoulder injury this season, and so I was out for, like, four weeks, and I didn’t even think I was going to be at state. I’m really happy.”

Lawrence High freshman Mary Reed-Weston was the only swimmer for the Lions in championship heats. She finished sixth in the 200 IM and seventh in the 100 breast.

“Her IM was better than her breast,” LHS coach Kent McDonald said. “Today was her breast was off a little bit, even in the IM and in the medley relay. It was just a little bit slow. I don’t know what it was. But it was experience. She is the best on the team, kind of a team leader in that aspect. She was kind of doing it alone, so I’m sure it was a little more pressure on her than she let on.”

“It’s always a really good feeling,” Edwards said. “A lot of family and friends are here supporting, so it’s fun to be able to please them and give them something to watch. It just feels really good, especially being my senior year.”

Immediately following the first-place finish, Edwards swam the anchor leg in the Seahawks’ 200 free relay to help it win the consolation finals and take ninth.

Edwards also finished in third place in the 100 fly (59.29) and swam in the 200 medley relay, along with Elizabeth Padgett, Emma Stilgenbauer and Ryal Mitchell, to place ninth.