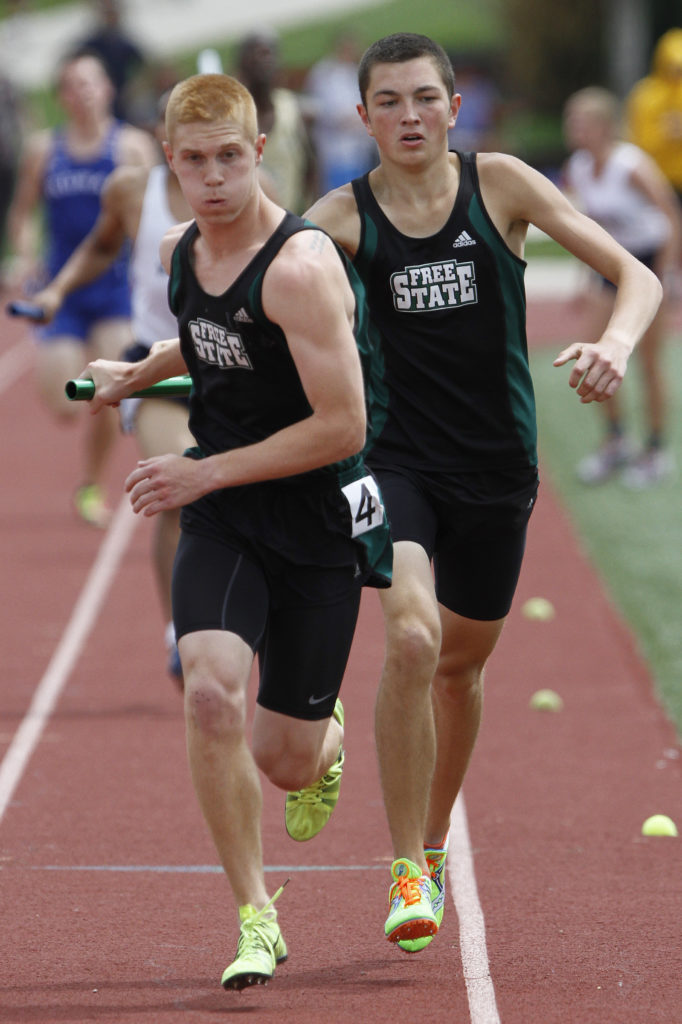 Free State's Stan Skwarlo, left, takes the baton hand-off from teammate Tanner Hockenbury during the 4x800 relay at a regional track and field meet, Friday at FSHS. The Firebirds won the relay.

Linebackers don’t become distance runners. They throw quarterbacks in the fall and weights in the spring.

And then there is Stan Skwarlo, standout Free State High senior running back and linebacker in autumn, distance runner in the spring.

Coming off a personal-best 4:25.11 in the 1,600 meters, Skwarlo was looking forward to finding out how low he could go in the most strategic of all track races.

Then he came to practice earlier this week and learned he would not be running the metric mile in the regional and state meets. Instead, Free State would stack its 4X800 relay team.

“I really wanted to run the mile, but after talking to our coaches I realized we had a chance to be the best team in the state in the (4X800 relay),” Skwarlo said. “Winning a state title would be a good way to go out. It’s just a really fun race, fun to be part of a team. You don’t really see the team aspect in track and field a lot. When you have a good group of guys and a chance to win, it gets really fun.”

The turn-around from the relay to the mile was too short to allow ample recovery.

So far, the decision looks like a wise one.

In order of their relay legs, junior Ryan Liston, sophomores Ethan Donley and Tanner Hockenbury and Skwarlo ran the fastest time (8:03.22) of any 6A school this year in Friday’s regional at Free State, a fraction of a second better than Olathe North’s best time coming into the weekend.

As a freshman, Skwarlo ran a leg of the 4X800 relay that almost won state and settled for second.

Skwarlo ran about the same times then as now, but it’s not because he hasn’t worked at it. On the contrary, it’s a result of him working so hard at two sports that require different body types.

“I’ve never devoted all my time to track the way most of the guys I run against have,” Skwarlo said. “As soon as track was over, I started bulking myself up for football season. I’d come out for track weighing 150 pounds and I’d have to put on 30 pounds for football. I’d work all summer getting the bulk back. Once football ended, I’d have to try to get the bulk off.”

He will concentrate on track at Wichita State, which offered him a partial scholarship. He said he never considered giving up football in high school.

“I grew up playing the game and I loved it,” Skwarlo said. “I had a great group of guys as teammates. We started playing together in third grade and played all the way up. And football is football. It’s a fun game to play. I loved every minute of it.”

Now, Skwarlo, who won the open 800 Friday with a time of 1:58.21, is loving the idea of becoming one-fourth of a state-title relay team.

The bearded Liston, who plays trombone in the Free State jazz band and is on the newspaper staff, jumped the Firebirds off to a strong start. Later, Liston still had enough left in his tank to easily eclipse his personal best in the 3,200 meters with a 9:47.39, good for third place in a meet in which the top four finishers qualified to compete in the state meet.

Ethan Donley took the baton next, carrying on a family tradition of track excellence. Ethan’s mother, the former Julie Jenkins, won an NCAA championship in the 800 meters for Brigham Young University and competed for the United States in the 1992 Summer Olympics in Barcelona. Her husband and former coach, Milan Donley, is director of the KU Relays. Ethan Donley, a seemingly effortless runner with perfect mechanics, shaved nearly three seconds off of his personal best in the open 800 with a time of 1:59.60. Mother and son have an ongoing wager. When Ethan eclipses mom’s personal best of 1:57.22, she owes him a dinner at the restaurant of his choice.

Ethan passed the baton to Hockenbury, who according to Skwarlo, “always has a smile on his face. And he definitely has the best running shorts out of all of us. Every practice, he’ll have American flag shorts or rainbow shorts, always something colorful.”

A rookie three years ago when denied making history by the smallest of margins, Skwarlo’s the veteran now, seeking to settle a score.

“As you walk down the hall (at Free State), they have all the state champions’ pictures up,” the anchor said. “It would be really awesome to see our picture up. That’s what we all want.”