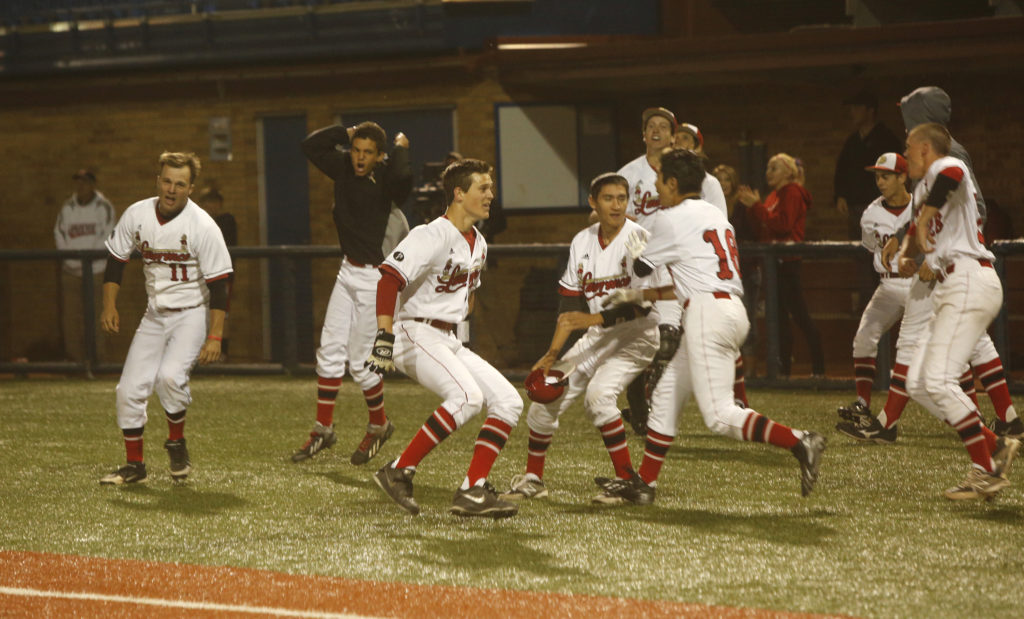 Members of the Lawrence High baseball team clear out of the dugout after winning the City Showdown against Free State, 5-4 in nine innings, on Thursday at Hoglund Ballpark. 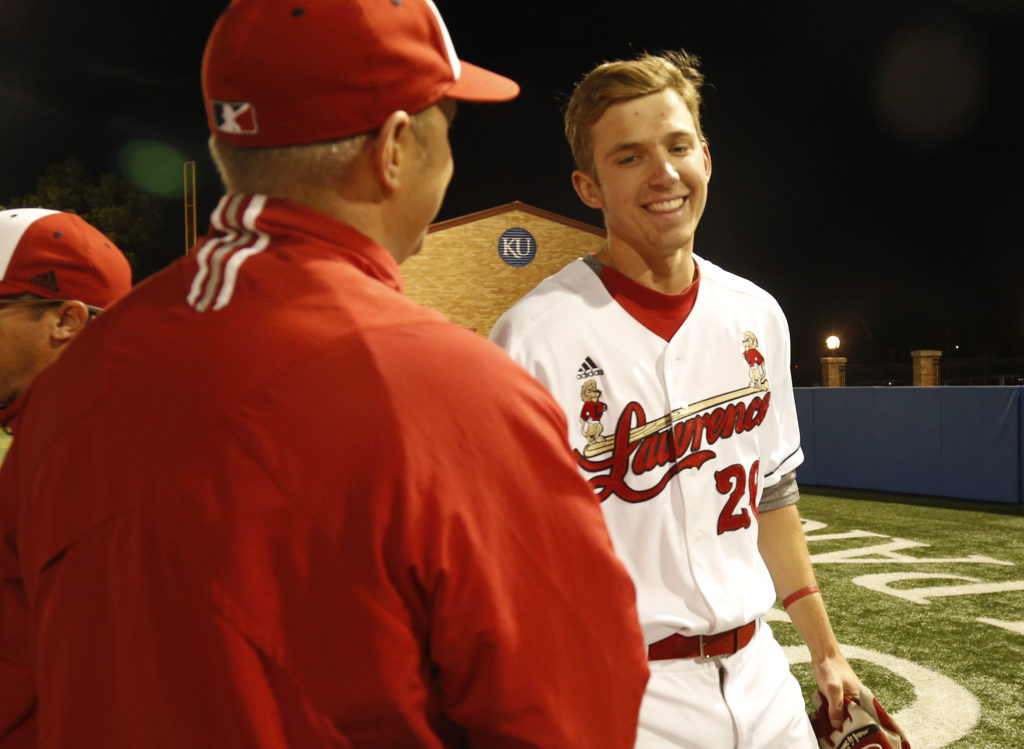 Lawrence High baseball players have lost a few close games in the last two weeks. They didn’t want to have another slip away, especially in the City Showdown on Thursday night at Kansas University’s Hoglund Ballpark.

In extra innings for the second straight night, Lions senior Jacob Seratte had the chance to provide the heroics with runners on second and third and two outs. Seratte hit a shallow pop-up just beyond the infield, and the ball dropped out of Free State first baseman Cameron Pope’s glove, giving the Lions a 5-4 victory in nine innings.

“It felt great,” Seratte said. “Everybody had been playing so well. We had great pitching. We had so many close games that we were on the losing end of, so it felt great to come out on top for once.”

The Lions led, 4-1, before Free State (12-8) scored three runs in the sixth inning to tie the game. Junior Cooper Karlin and senior Cameron Pope hit back-to-back RBI singles, while Karlin later scored on a ground out.

LHS (10-10) had the opportunity to end the game with runners on the corners in the seventh inning — a single from junior Michael Sinks and a walk by senior Drew Green — but a strikeout and pop-up ended the frame.

In the top of the eighth inning, Sinks prevented a leadoff double from Free State junior Joel Spain with an over-the-shoulder catch in shallow left field.

“The ball is off the bat and all the coaches were like, ‘Ohh,’ just because it looked like off the bat it was going to drop,” LHS coach Brad Stoll said. “Here he comes out of nowhere. It’s just two nights in a row, where he’s done some really tremendous things with the glove.”

The Firebirds stranded a runner at second base in the top of the ninth inning before LHS senior Alex Smith-Gauna drew a leadoff walk. Smith-Gauna was removed for pinch-runner Ivan Hollins, who moved to second base on a sacrifice bunt and to third on a groundout, setting up his game-winning run on an error.

“I thought it was a well-played game on both sides, it was just a matter of getting something to fall,” FSHS coach Mike Hill said. “Credit to Lawrence, they got something to fall. We weren’t able to. We had opportunities, didn’t happen.”

LHS sophomore Parker Kirkpatrick earned the starting nod for the Lions, saving right-hander Bryce Montes de Oca for regionals, and gave up one run in the first inning — Pope drove in Karlin with a single. Kirkpatrick didn’t give up a hit over the next four innings before the Firebirds’ three-run outburst in the sixth.

Free State starter Ryan Stagg matched Kirkpatrick for most of the game, but gave up a RBI single to Ryan Walter in the first inning, and RBI singles in the third and fifth innings to Sinks.

“I hadn’t been playing very good before this, so I’ve just come out with a different mindset the last couple of games,” said Sinks, who went 3-for-4 Thursday. “Playing Free State definitely helps.”

“Everybody plays their best baseball,” Sinks added about the rivalry. “Everyone just wants to win so bad. I can’t explain to you how happy I am.”

Both schools will learn of their regional schedules on Saturday.