Love Garden Sounds has called downtown Lawrence its home for the past 24 years.

We met with Corcoran to discuss his evolution from KJHK DJ and record lover to Love Garden owner, the beloved cats of the store, and how a memorable Ad Astra Per Aspera performance led to Love Garden’s first 7-inch release. 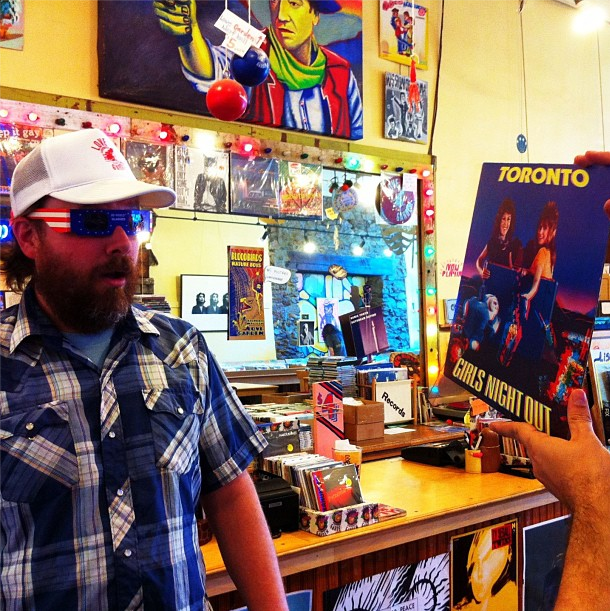 JS: Since when have you owned Love Garden?

JS: What led you to owning it?

KC: I met my wife in Washington, D.C. She didn’t want to live in a big city anymore. She got a job here, knowing that I would follow her, because we were talking about getting hitched at the time. She knew I would go wherever she landed. I know the owners of Love Garden, Kory [Willis] and Zippy [Hester], from shopping there throughout the ’90s. I started shopping at Love Garden in ’94 or ’95. I was in Topeka. I was going to school at KU. So I would go to Love Garden. I worked at KJHK at the same time. I had set up a trade program between KJHK and Love Garden. It had gone well. It was organized. So when I was back in town, they searched me out to hire me because they had said I did such a good job with this program with KJHK. I said, if you give me health insurance, I’ll take the job. And they said OK! So I got health insurance and I got the job.

KC: I was. I was a music director, program director, and assistant music director. I had the longest arc I could possibly obtain. I also worked at the Replay at the same time when I was in college.

JS: Did they play a lot of records at KJHK at that time?

KC: They did play records. It was always a struggle keeping the equipment up and running, but I was fairly good at making the turntables work. But definitely — records were a pretty regular thing. I did “Alternative Flashback” for a year and a half, which was a show that played a lot of music from the ’80s. I would also play soul music and whatever. I would play REM and The Embarrassment, which is a Lawrence band that is definitely my favorite band from that era. I really am a nut for The Embarrassment. That was kind of the aesthetic I cut my teeth on and was most interested in and had a direct connection to. Independent rock music of that era. I did that show and I played a lot of records. I would go into the basement of the old station and dig through the stacks, and the idea was that every show I needed to play three things I have never heard of.

In the end, the experience there — the organizational part, the conversing with people, dealing with the town as a whole, booking shows at,” and he booked a lot of local bands at the Bottleneck. So were like a bizarre power couple. I just had energy and loved it. I’m sure that energy and enthusiasm translated into the job at Love Garden which translated into… the original owners being willing to let me buy in.

JS: What was the store like when you first started visiting it?

KC: I think I was initially intimidated, but once I started conversations with people who worked there, I quickly understood the strength of a store is the communication that occurs there. And I learned that pretty quickly. I would ask them questions and they would suggest things back to me. They would direct me to things they thought I’d like. But I was also really curious to do the same in return. One of my favorite parts of the job now is that it’s a two-way street. When someone asks something I don’t know, I always ask, “What’s the story with that?” I’m genuinely curious. I do this and music is around me all the time, but knowing more doesn’t make my taste more valid. It just means I know more and know the context of things. But there aren’t many original thoughts left.

JS: Do you have any crazy stories over the years?

KC: Moving the store was a pretty traumatic thing.

I’d say the one that’s probably the most infamous, and what triggered me to put out two records, is when Ad Astra Per Aspera took a six-month break from playing shows. They were really popular in town and they took a big break. They played their first show after a six-month hiatus at the old Love Garden space in ’05 or ’06. It was very crowded. There were a lot of people jumping up and down. There was genuine fear. I had decided during their last couple songs, “Well, if we live through this, I’m going to ask them to put this song out on a record.” And I did, and that’s how I put out the first Love Garden 7-inch.

JS: What was the single?

KC: “Rip It Up.” We still have the 7-inch over there somewhere. That one was kind of funny because it was a little bit scary, but it was a great show. It was really fun. The energy of the night was great. I remember that one being really terrific.

JS: What was the process of moving the store?

KC: We had two stores running at the same time. One store was the new, more active stock. The other store we discounted stuff… we were just getting rid of stuff. When we moved stuff from one location to the other, we got this big sled out. We built this 8-foot sled and we would push it down the street on the sled. I would intentionally do it on the busy days. I would do it during Saturday when there’s tons of people out. I thought of it as free publicity. Cause everyone was like, “What the [heck] is that?” I thought it was genius because everyone who sees you pushing this cart around is wondering “What are you doing?” By the time we had done that forever, people knew we were moving.

JS: What’s the history of the Love Garden cats?

KC: There have been seven cats. The first cat was Jack. He was the cat of an employee, Jason Willis — unrelated to Kory Willis. Jason started to bring Jack into the store. Jack would hang out during the day and then they would take him home. But then they realized it was too much work to move Jack around, so Jack started staying in the store. This was in the first year that Love Garden was open. The other cats stacked up on top of it. Mickey and Sam — you know cause they’re currently with us.

JS: How many records do you own?

KC: 3,500 maybe. Maybe including 45s — 4,500. Something like that. Records come and go all the time. Doing this job makes me realize records are just stuff. They’re cool and I love some, but they cycle in and out of my life. And I like it that way. There’s always another cool thing.