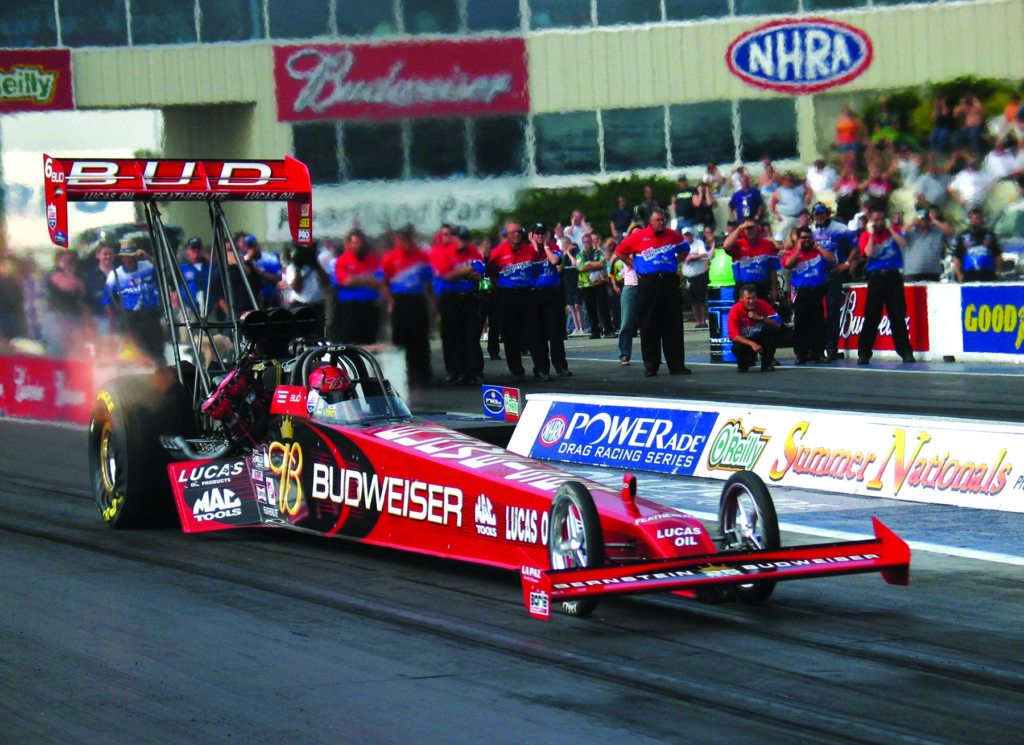 Heartland Park Topeka has featured NHRA drag racing and other events since 1988. But the facility is now on the verge of financial collapse, and the city of Topeka's plan to bail out the track's management and take over full ownership of the facility is stirring controversy.

Topeka ? The perils of using taxpayer money to finance private sports facilities came into full view at the Topeka city council Tuesday night when city leaders agreed to move forward with a plan to issue $5 million in bonds and take over the financially troubled Heartland Park racing complex.

City officials say the racing complex, which is best known for its NHRA drag racing events, is on the verge of bank foreclosure, and that could spell the end of professional racing in the Topeka area.

In addition, city officials say, foreclosure would saddle Topeka property tax payers with $10.8 million in debt that is already owed on the park. And it could also mean the permanent loss of the estimated $160 million a year in economic activity that officials estimate the park generates during race events that fill up local hotels, restaurants and shopping centers.

But the city’s plan to take over the park involves issuing yet another $5 million in debt to buy out the interest of the current manager, with no guarantee that a new manager can make the speedway any more viable than the previous two owners have.

The plan has stirred huge public controversy in Topeka, where auto racing has a long tradition in the local culture, but where fiscally conservative voters argue the plan amounts to throwing good money after bad.

“It sounds a bit like a gambler who just keeps gambling to retrieve his losses,” one Topeka resident said during a public forum about the plan Monday night in advance of Tuesday’s city council meeting. “It’s a money pit. We all worry about gamblers.”

“I’m all for it, as long as it stays private and pays for itself,” another man said. “But it should be just like any other business, and government has no business getting into it.”

“Now you’re destroying our quality of life and no one’s going to live here,” another Topekan replied. “Quality of life issues generally cannot be self-supporting and that’s why they have tax benefits. That’s a fact of life anywhere in the country.”

Built in 1988, Heartland Park has always been a joint venture between the city and a private racing management company. Originally, the track and stadium were financed with $7.5 million in general obligation bonds, which officials say have since been paid off.

In 2003, Raymond Irwin and his company Jayhawk Racing Properties LLC took over management of the track, and two years later the city issued $12 million in sales tax revenue, or STAR bonds to finance maintenance and renovations of the facility.

City councilman T.J. Brown said the idea was that the speedway was supposed to attract new retail development around the park, and the increased sales taxes generated by those developments would pay off the bonds. The bond payments were structured to start off slow and gradually increase as more development arrived.

But that development never materialized. Instead, the area south of Forbes Field has remained largely industrial in nature, with only an automotive dealership and a few convenience stores operating in the district that was supposed to generate the retail sales taxes needed to pay the bonds.

Now, with $10.8 million still owing on the bonds, city officials concede the district is not generating enough sales tax to meet the bond payments.

Meanwhile, city officials have said, Jayhawk Racing has amassed more than $2 million of additional debt on its own. And in the face of declining attendance at NHRA and motorcycle races, not to mention the growing popularity of the more commercially successful NASCAR racing, the entire enterprise is now on the brink of financial default.

The city’s plan calls for expanding the size of the STAR bond district, stretching it far to the north of the track itself to take in the White Lakes Mall and some other retail business along South Topeka Blvd.

The city hopes to close on the bond deal by Dec. 30. But before that can happen, Topeka still has to pass several other hurdles, starting with hiring a new manager for the park. The city has issued a request for proposals and is expected to select a new manager. The deadline for submitting proposals is Dec. 12, and the city council is expected to select a manager when it meets Dec. 16.

NHRA spokesman Geno Effler said Wednesday that the organization has had no particular concerns about Heartland Park, and it has agreed to continue holding part of its national “Mello Yello” drag racing series at Heartland Park over Memorial Day weekends for the next three years.

According to that agreement, which is posted on the city’s website, that commitment is based on a guaranty from the city that each NHRA event will generate at least $1.8 million in revenue. And any time event revenues fall short of that mark, the track is obligated to make up the difference.

City officials said Tuesday night that the new manager, not city taxpayers, will be responsible for meeting that obligation, and the city plans to make no further investment in the facility.

In addition, the Kansas Department of Commerce has to sign off on issuing the STAR bonds since they involve the state giving up a portion of its share of the sales tax revenue generated in the district.

Meanwhile, a protest petition to force a public vote on the city’s plan was recently invalidated by a Shawnee County judge. But while the organizers say they plan to appeal, the city says it plans to move forward with the bond sale because, as yet, no court has told the city it can’t.